“I never thought I’d hear anyone say that,” a punk kid replied.
“What?”
“The pigs got my back.” 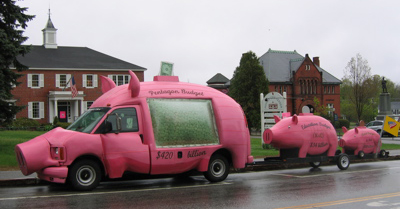 I shared a laugh with the group of cool-looking youth. This was the first crew of people I’d seen in New Hampshire that looked like “my people.” In Jaffrey, NH of all places – a small town in the Southwest part of the state. My outside gig there got rained out, so I brought the Wheel of Fortune inside and played with about 50 people who braved the deluge to check us out.

We set up in the town’s civic center, a colonial building that had a historical exhibit in the foyer to the main room. An interesting mix of people: old hippies, punk kids, and a radical Quaker or two. A local punk rock band set up to play a set, but only played three songs. “There’s a class upstairs and their ears are melting,” the organizer said as she ended the band’s set. 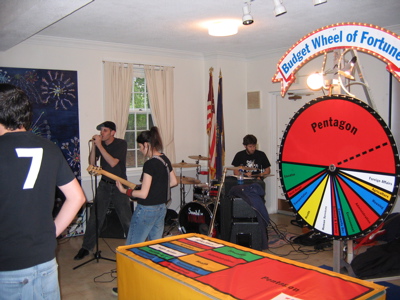 I met Sandy, a sharp-dressed, 60-something Quaker who cut to the chase:

Sandy told me that he had a affinity with the Eastern Canadian provinces and that a group of people in New Hampshire were trying to secede from the Union. I told him about Johnny UniteUs in California and his promise, if elected as governor, to secede from the USA too. He left me with a twinkle in his eye.

So the Piggies shadowed my tour this weekend, showing up Friday in Concord on an overcast, SF-like evening. They then came by my gigs in Jaffrey and Westmoreland on Saturday, and the Keene Mother’s Day event today. Like I told the kid, they literally had my back.

People gawk at this great “educational vehicle.” They pull over to take photos, even when the rain pours. Two speakers, set up behind the large piggie’s back wheels, play snorts, squeals, and a hip hop song that Ben Cohen sings himself. This, and the EL wire lights, are controlled bay a console sticking out of the dash. Volunteers take turns driving it around and the coordination takes place out of the Burlington office.

Leaving Westmoreland, a tiny hamlet out in the country, the CarnyMobile and the Piggies made a quick parade to their resting place in Keene. I got to see the gawks at the piggies, and then the read of my banners. Good guerrilla marketing from the Priorities HQ.