Devin talked about his plan since early 2012. He initially planned to ride MUNI buses, trains, and cable cars for 24 hours on Friday, March 16. After I told him that that was St. Patrick’s Day weekend, he realized that the drunk and stupid quotient would be up. He postponed the ride to June 8.

I told him I’d love to ride along a bit, so Devin decided to eat lunch, a sandwich he made that morning, in my hood. I sometimes leave my phone off all morning so missed his texts (he had his phone off for most of the ride). He buzzed at the front door, took a quick WC break, and I joined him. We walked down to Divis and spent his break at Cafe Abir. We hopped the 24 and rode it to the end of the line on Fillmore. Caught the 10 and meandered through Pac Heights, Chinatown, North Beach, and then down into the Financial District. I hopped off at Market and caught a Fulton 5 back home to do some work.

He mentions the woman we met on the 10. He does no mention the joke she told us:

Three Italian sons move to the USA to succeed in life. The first one makes money and buys their mother a house in Italy. She replies, “Thanks for the house.” The second son makes his money and buys their mom a car and a driver. “You do too much. I let the driver go,” their mom said. The third son succeeded and wanted to buy their mother the most exotic bird he could find. So he bought her a parrot and shipped it to Italy for her. His mother sent him a note, which read:

“What a lovely gift. The chicken tasted terrific.”

Anyway, I snapped a pic of Devin during his travels. And he’s begun to post stories from the 20+ pages of notes he jotted down.
Glad I got to enjoy about two hours of his 24 total. 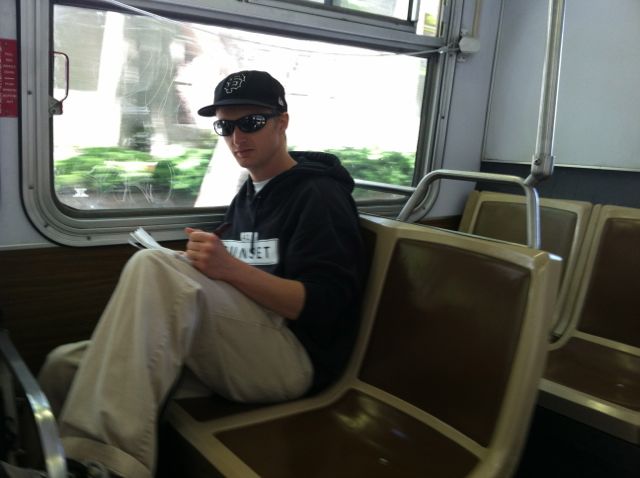 END_OF_DOCUMENT_TOKEN_TO_BE_REPLACED

I think one of the best things I like about my iPhone (well, and my old crappy Blackberry) is snapping a pic and then setting it as the background image (screen saver, wallpaper, etc.). With the iPhone camera, which is good for a phone camera, I have started to take more than just stencil photos (I usually use my camera camera for nature shots). I took the recently-posted empty F train car photo specifically to use as wallpaper on the iPhone. 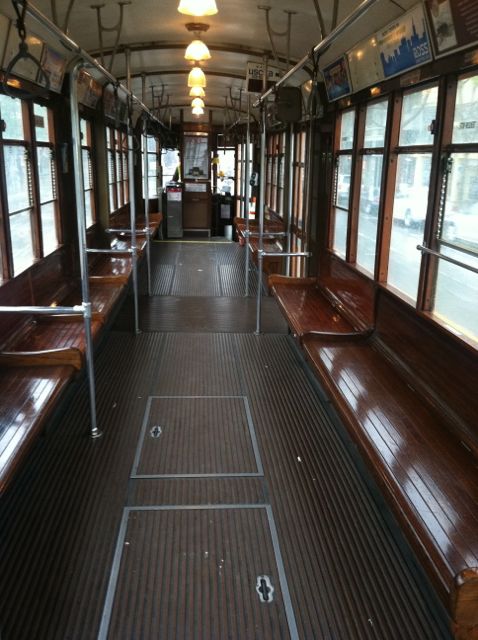 Here are three more photos I took specifically to frame in a smart phone. They are all vertical. I do take horizontal shots of some things to use on my laptop for a desktop image. Please feel free to grab these images and use for backgrounds on your phone. Just drag/drop and put in your phone’s camera roll to tap/select as wallpaper. Remember that they are all protected by the Creative CommonsÂ Attribution-NonCommercial-ShareAlike agreement. You can use them but not make $$ off of them!

an open space to dry off in

Walk around and contemplate the chill,

imagining the strangers sitting next to me

packed in down at the Piers.

It is just me and the driver

and open window at the back

down the hill in minutes.

so I head to Trieste for decaf

slip and fall on the sidewalk

and end up OK, just a bit wetter.

At the cafe, watching other trains pass

Wandered up to Mendocino last month and snapped some pics between rainstorms. The fairy slippers were a nice treat. Got to use my Mucks for the first time. They came in real handy when I had to dig a hole down to some busted pvc piping. And they were also great when the woofer and I dug some tree trunks out of the garden. The blisters on my hands have finally healed. END_OF_DOCUMENT_TOKEN_TO_BE_REPLACED

My storage space spent the past month under plastic sheets to keep construction debris and dust out. After the workers (flipping an apartment above the storage space…. $2000 / mo. 1 bedroom) vacuumed the space, I took some time to purge some stuff. One item was an old Firewire 400 hard drive that I built about eight years ago. I got it working, so I pulled items off and then erased the disc to possibly give to a thrift store.

Three finds on the old hard drive, named Oblio, were these files of scanned slides from my trip to Israel in 1999. I actually tried to photograph people on this trip which is a rarity for me. The man smoking the water pipe was suspicious of my camera, so this shot was from the hip. The camel ended up being on the World Remix flyer for Yair Dalal’s 2001 concert at CELL. Sometimes I miss using my film camera.

END_OF_DOCUMENT_TOKEN_TO_BE_REPLACED

During my 2008/9 Stencil Nation book tour, I set up an event with Matteo Grieder at his art space Zeitvertrieb in Vienna, Austria. Matteo was nervous about the turnout (a common anxiety during my European tour), but I had Pod and Austrian artist Dieter Puntigam backing me up with live VJ and DJing. A nice crowd came for my presentation, bought books, ate and drank, and made a great scene for the event. Matteo was surprised and happy with the results.

A month ago, Matteo approached me with a request for photo submissions to his fun art zine “Artyfucked”. It is mostly a sketch zine, but he also features street art from cities around the world. Issue #8 features my stencil photos (the cream of the crop) from SF. They mostly cover 2011’s greatest hits. He also put them all in an online album.

Support a great project and buy a copy of “Artyfucked” today!

For well over 10 years now, I have been documenting stencils on Bruce Tomb’s wall on Valencia Street (If you search the Archives for "DAP" they will appear). I have also put art up there and enjoyed all the other art that I do not document. Tomb may not confess to actually owning this wall, because over the years it has become a wall of Free Speech for many artists, neighbors, and organizations. Some call it the Democracy Wall, but Tomb named it the (de)Appropriation Wall, especially since he resides in a former SF Police Department building. The building had a literally tortured past (Chicanos and Latinos were treated poorly by the mostly Irish police in the last century), and a bomb was placed at its back door during the violent era of radical factions in the Bay Area. Tomb decided to use the facade of this building as a force of freedom, more specifically of speech.

Tomb had a brief tussle with the City authorities over his free access to whomever wants to get up on this wall. When the City realized that it could potentially be a Constitutional matter, they backed down. The DAP wall shows up in my book "Stencil Nation" about half a dozen times. He has written about it in the book "Mission Muralismo," where it was featured. Before the book came out, some of the contributors had a show at ATA. I showed a slide presentation of Mission District stencils. Tomb showed the following video of the photographs he has taken over the years. I believe he stands in the same exact place about once a week and snaps a photo of the wall. Being a historian and documentor, I asked him to post this video for others to enjoy and analyze. For a reference of time, notice how the tree grows in front of the wall!

And for a better explanation of Tomb’s concepts and ideas around the wall, go to his site: http://www.deappropriationproject.net/


The (de)Appropriation Project Archive will be participating in the Theoretical Archaeology Group Meeting held at the University of California Berkeley from May 6-8, 2011.

Resident archaeologist on the project, Phoebe France will present a paper for session 15: Graffiti and the Archaeology of the Contemporary.

This is an exciting chance to present the project in a new context, and to get feedback on the most recent iterations of the web resources and tools. Please join us!
http://arf.berkeley.edu/TAG2011/

Ah… FaceBook sucks all my creative energy. Thus tolls the blog bell. Haven’t posted pics on here lately because of the ease on FB. Share TO the world rather than have them come find it. Spending more time up in Mendocino county on some land that the Noyo River runs through. Rained five inches when I was there a few weeks ago! The land is so alive; the river fast and furious. A bear visits sometimes. Salmon are said to like the Noyo. No industry along this river which cracks out of the hills and heads to the Pacific.

Here are four photos I took this past visit. Morel mushrooms! Yum. Lichen loving a rotting log. A rusting piece of farm equipment in a field in front of second growth redwoods. And the flooded banks of the Noyo.

The REDCAT NOW Festival made the Sunday, Aug. 8 “Scene & Heard” column. Christine Marie had a great quote pulled stating “she began experimenting with the technique long before ‘Avatar.’ ‘I’m way ahead of James Cameron,’ she said with a laugh.”

Here are some photos from our last night at REDCAT, taken by Steve Gunther.