Bob Clarke’s 1965 MAD Zeppelin: The Final Steps
Adding the Final Touches, and Hanging It Up (Figures 8-9)

FIGURE 8: THE SAILS
At this point, the only steps left are installing the Mainsail and Forward and After Sails. Oh, and the stringing of the two main parts. I chose to make black and white copies of the sails. Clarke’s original inserts are black and white and one-sided (probably to save money in printing and design costs).

Not sure why Clarke drew the FIGURE 8 illustration for the Small Sails. Their installation is straightforward. As for the Mainsail, the lack of structure for the mast caused the Yardarm and Mainsail to keep falling apart. This assembly needed patience and delicate finger work. As I tried to make this assembly, other parts of the MAD Zeppelin kept falling off.

TIP: Be resigned in the fact that you’ll have to adjust parts after stringing the parts up (see below).

END_OF_DOCUMENT_TOKEN_TO_BE_REPLACED

Back in 2003, a major shift had happened at CELLspace. Events had been shut down and a large group of volunteers had pretty much left 2050 Bryant to start the Mission Market back on Florida Street. Tensions were high, people were burned out, and CELL needed to pay rent. CELL had had one of its few retreats to try to reform the regroup after many caretakers left in a huge pile of animosity. Then the war in Iraq started. We had all been protesting to not start this war and most of us saw the meta-narrative of CELL’s plight as that of the world’s.

I was personally down about the war and CELL. I’d backed off a bit to take a break, but I was answering the info email address (because no one else was). Since 1996, CELLspace has inspired many people to start their own space. There’s the Crucible, the Box Shop, and many others. From time to time, people would stop by to study CELL. And we would get emails asking about how to start a space. At the time I was answering info@cellspace, I got an email from Bucketworks in Milwaukee, WI (now in its 9th year!!). They were starting up a space and had great questions about how to do it. They caught me at a time where I must’ve been ready to talk raw and candidly about what was going on at CELL.

CELL had just turned 7 when the email arrived. I had just finished co-producing the Funky Puppet Supper, which was an amazing show that touched on CELL’s plight and the plight of war with Iraq. I pulled the original emails off of the Oblio hard drive last week, and decided, for CELL’s 16th Birthday (this Spring Equinox), to post it on here in its entirety. It is emotional, raw, unedited (well, I did take out a few bits that were too personal). It is a great snapshot of how I saw CELL back in 2003.

I had no help in answering the questions. I did not answer this based upon any horizontal process. So do not expect this to be the definitive angle on what was happening at the time. Remember, I was going to CELL meetings with about 3 other people while about 12 people were meeting and running the Mission Market. And a group of workers had left the space. These were hard times.

Being a lover of history, I cannot pass up adding the following Q&A about CELL to my Month of Blog. Happy 16th birthday CELLspace! So many amazing and intense memories.

Last Saturday afternoon turned out to be hot and sunny, so I thought I’d have about 3 or 4 people attend the scheduled skillshare at Modern Times books here in the Mission. I had the table moved out into the store, thinking that I’d end up sitting alone, cutting out my own stencil, but I only got to make about five cuts. 10 people showed up (on time), tipped to the event by the SF Weekly listing, so they helped me move the table into the back area of the store. Then about 7 more people showed up, so I had the MT people set up two more tables to work on. Like a kindergarten class, we had to share pencils and Xacto knives, and MT gave me some cardboard for everyone to cut on. I had enough paper to go around, and one attendee cut up his piece of mylar to share.

I began with a 5-10 minute introduction about making a stencil. Several people had made stencils before, so I asked them to sit next to those who hadn’t made one. Some people showed up with no idea to draw and cut, so they went to the free papers, magazines, and info section of MT and cut images based upon photos and art that they found interesting. I spent the rest of the skillshare walking around, answering questions, and giving tips. Scott Williams showed up with a bag full of his stencil journals, so people took breaks to sit with him, ask questions, and flip through his art. He also brought cut out stencils, cutting mats, and a worn out Xacto knife to share. All of the supplies he offered were promptly utilized.

END_OF_DOCUMENT_TOKEN_TO_BE_REPLACED

This is it! The final Stencil Nation tour which will end the Year of Stencils (which began last June with the book opening). What an amazing (road) trip it’s been, giving me hope that humanity is not completely lost in a consumer/TV/Xbox/Twitter haze. All your help, hospitality, support, cooking, schleping, encouragement, and couches/futons/beds can only support the fact that there are amazing people throughout Stencil Nation who see kindness and community within the whole art and graffiti worlds. I am grateful and indebted to you all for all that you have done along the roads that lead to that next stencil! 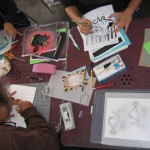 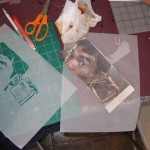 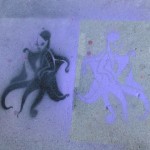 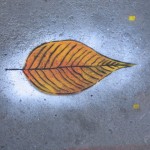 Back on the roads of Stencil Nation tomorrow. Hoping that pigs and birds aren’t allowed or sneezing on the bus down to LA! The tour has been OK so far. Crowds are a bit off it seems, and sales are low, but I am happy to be on the road. Arcata and Sacramento happened last week, to little fanfare. I’m not sure what happened, or if stencils are on the radar that much in that part of California. Only a small turnout in Davis. All enthusiastic people who waited a bit longer than usual before the presentation. I showed them photos of Stencilada at CELLspace to kill time. Only sold a few books. Had an isolated day in Davis the next day, and managed to find a few stencils around the college town. Got to upload pics to Stencil Archive, which was long overdue. Sacramento on Sunday was quite miserable. The highlight was finding what looks like a C215 stencil on a random building in midtown. Found a few more stencils near the book store in the Tower District. But the presentation was a wash! Had one person show up, and we waitied about 30 minutes for more people, killing time looking at a Peter Kuper Spy vs. Spy book and flipping through Stencil Nation. She left and I left soon after, getting stuck in traffic the whole way back to San Francisco. Last Wednesday at Booksmith on Haight St. was a good time. Had about 12 or 15 in attendance. Sold some books. Got to finally meet Eclairacuda Bandersnitch, the current queen of street work in SF. She said that the kissing girl stencils all over the Mission are by Banksy (he’s got a book out from PM here in the Bay Area so was in town). Who knew he painted sidewalks? 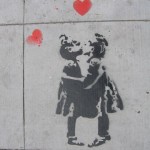 Spent Thursday at the SF Zero Graffiti Huddle in China Town. That was disturbing (will post my notes soon). I missed the SF Arts Comission presentation on thier upcoming Street Smart program (artists to paint murals on walls that have permission). CUBA was there, one of the godfather’s of SF spray art. We connected and I think it made both our days. Sunday was the presentationÂ  and skillshare in Oakland. Another small crowd of about five people. Good news is that four of them stayed for the skillshare. The photos of our hanging out and making stencils are at the top of this post. When I showed up to Rock Paper Scissors, the exhibit on the walls was getting painted over and a zine jam was happening. I encouraged them all to hang out and keep working during my presentation. Loved the multiuse aspect of that small space. Ruby from Wisefool was there, dropping great history of stencils in the Bay Area and adding great comments durng the presentation. So, off to the southlands tomorrow. No idea where the next wifi connect will be. Oceanside and San Diego are the next stops. Then LA (tell all your friends!) and Tempe, AZ. Then back up to the Bay Area for about four more stops. I added up all the stops from this tour and the upcoming Middle America leg, and will have done over 50 stops by then. Not sure what else is in store after June. I DID say last June that this was the “year of the stencil” so am not quite sure what next year holds in store. Year of the swine flu? Hope not!!