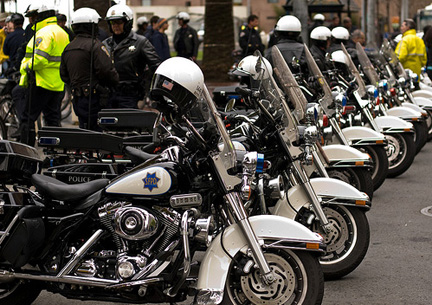 Almost a year ago, the monthly last Friday ride Critical Mass caused a ruckus when a van met the throng of bikers in Japantown. Not knowing how to react (put the car in park and enjoy the spectacle), the driver sped up and drove through the riders, knocked one off his bike, and then tried to flee the scene. The van ended up surrounded with a smashed window, and the SF Chronicle ended up with early fodder for what seems to be a subtle campaign to unhinge the Bike Plan for the City.Mayor Gavin Newson responded to the incident, stating “we are going to address what’s been going on. We’re going to have a chance to calmly take a look at what the protocols have been.” He was commenting about the fact that the van driver didn’t get a ticket for her reckless driving, but his mention of looking at protocols should have raised a warning flag for the riders who love the freedom of a Critical Mass. SFPD Sgt. Steve Mannina also threw out a comment about Critical Mass, saying that “the SFPD will not facilitate the ride or give the riders preference over other street traffic.”

The Chronicle hoped to get a juicy story on the next month’s Critical Mass, but they got a fluff piece full of the fun and enjoyment that usually happens during the ride. “A SMOOTH RIDE,” they announced in the headline, “After last month’s heated confrontation between bicyclists and a driver, participants were determined to make this month’s event a more pleasant experience.” This may have been the case, but there was another reason for the smooth ride: 40 police officers, along with DPT bikers, and the usual assortment of paddy vans, helicopters, etc. The Chronicle reported that the amount was “twice the number typically assigned to the event. About half of the officers rode mountain bikes, and the rest were on motorcycles.”

I was on that May 2007 Critical Mass ride, and had a good time as usual. The number of police was much larger than I’d ever seen. They made their presence known, but seemed to be there for the riders and not for the cars. I felt a bit uncomfortable seeing them there, knowing full well that Critical Mass could take care of itself in its own no-leaders/all-leaders way. I have seen it before and knew that the incident with the van was one of many crazy things that happen during CM. I had seen crazier things myself years before, so I began to resent the fact that the SFPD thought they were the ones that could handle Critical Mass.

Over the past year, I have seen what appears to be Critical Mass-friendly actions from the authorities. I saw DPT bikers corking, blocking, car traffic and telling car divers to park and wait for the ride to go by. SFPD motorcycle cops have stopped car traffic, made cars pull over to the right, and corked intersections. I have seen police mediate hot situations, and even write tickets to car drivers. I have seen them tend to bike accidents as well. They continue to allow Critical Mass to run red lights, and seem to let the riders pick their own route.

But those official statements from a year ago haunt my take on how the ride works. Newsom wanted to look into the protocols of dealing with Critical Mass, and Sgt. Mannina said that riders weren’t above the law. And then in the May 2007 fluff piece, what was left out of the article appears to be what is happening to the ride. Of the 40 police that followed Critical Mass, the SFPD probably didn’t report how many undercover police grabbed a bike and joined the ride.

One year later, I believe that the SFPD has developed a protocol that has finally led to the co-opting of Critical Mass. The evidence seemed weak at first, while thinking of the good things they do on the ride. A few experiences from last Friday’s Mass left no doubt that the SFPD is firmly in control of the ride. Here are some of the tactics that I have witnessed first hand:

The last example has finally convinced me that the ride may be co-opted by the SFPD. Last Friday’s Critical Mass was boring. We literally went all the way down Market Street, finally turning at Valencia. At Market and Valencia, I was near the front of the ride yelling to go right on Octavia towards Hayes Valley. Valencia St. is ripped up with sewer construction so not a fun street to bike on. No one listened to me, and the Mass went down Valencia and eventually wound on Church St. Heading towards Haight Street on Church, I got to the front of the ride, with the motorcycle cops, and a quiet group of bikers. I suggested doing the Wiggle, and got no response.

I ran into a friend, also bored with the ride, so we began to discuss a route. Heading up Fillmore towards Haight, about 20 bikers rode ahead of the ride and with no announcement turned left on Haight St. The SFPD followed and even had motorcycles waiting at Steiner. My friend and I started yelling “turn right” and about 20 bikers who stayed at the head of Critical Mass turned right. We stopped a block away at Webster and literally saw the ride pause on Fillmore.

One block to their left stood 20 bikers with 10-20 SFPD motorcycles. We were the other way. I could clearly see the cops from two blocks away and yelled “go this way. Critical Mass doesn’t need the cops!” But the front of the ride decided to go left. Disgruntled, we all rode back and joined the group. My friend commented that in the past year, he has never seen Critical Mass go down Octavia Blvd., but he always sees police at Market and Octavia who are ready to block of a run for the freeway.

I may be wrong about the police now controlling the ride. If so, then Critical Mass now has a herd mentality that inclines to think that the legitimate ride is where the police are. Critical Mass may be lazy now that the SFPD corks, controls car traffic, and maybe leads the ride. I know that stepping up to lead at Critical Mass can be hard work and not much fun (front line fodder is how I’d describe the corker heros of the ride), but that’s what it takes to keep this experience in our own hands.

I also know that I could get a group of like-minded people together to try to lead the ride. I know that it’s a do-ocracy which means that if I’m pissed about the “follow the cops” herd mentality, then I’m the one that’ll have do something about it. I’m writing this because the Critical Mass rides feel different now. It doesn’t feel leaderless anymore. I’m writing this because there seems to be an undermining of the City’s Bike Plan from forces that think they can sell papers by stirring up the anti-bike sentiment. This appears to be happening at the same time Critical Mass has a “good cop” police influence. I’m writing this because I DID try to change last month’s route and lost to the parade of cops in white helmets.

Critical Mass’s Wiki page says that “the leaderless structure of Critical Mass makes it impossible to assign it any one specific goal. In fact, the purpose of Critical Mass is not formalized beyond the direct action of meeting at a set location and time and traveling as a group through city or town streets.”

That said, if you ride San Francisco’s Critical Mass next month, and find yourself in front of the Mass, change things up. Don’t let the cops intimidate you. Don’t let their exhaust make you dizzy. If they seem to be feinting right, why not go left. If there’s a new group of SFPD on motorcycles to greet you at the next block, simply turn away from them and go somewhere else. I might be up there with you. I hope to see the police panic because they are learning once again that Critical Mass has no leaders.

Not them. Not me. Nobody.