“It can be tremendously beneficial when dealing with difficulties to be lighthearted in one’s engagement with life so that one will not take oneself too seriously.”
– HH the Dalai Lama

“Weâ€™re making fun of the huge corporations and the religion of business.”
– Ed Holmes aka Bish Joey of the FCLL 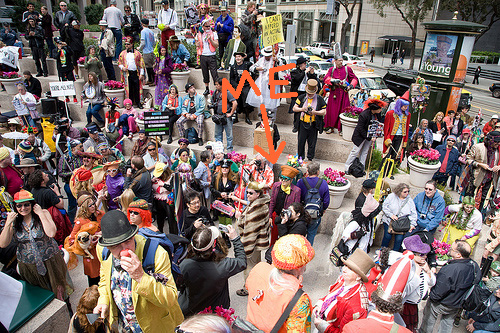 OK, must catch BART to Justin Herman to get there around noonish before the parade starts. Let’s see. Red and white stripped socks? Check. Green protective goggles? Yep. Samba whistle? Still in the bag from Critical Mass. Crazy pink women’s jacket? Just picked it up from the cleaners. Red pants? wearing them. Flowerpot hat? Got it, and it still has a sticker on there from the NYC GOP protests 3 years ago. The sticker says “Worst President Ever.” OK, I think I have everything for this year’s St. Stupid’s parade.

Ah, another sunny day to be stupid in San Francisco. Must accessorize my red pants now that I’m here and put everything on. Shit! Forgot my conch shell horn. Oh, well. Oh, there’s a guy beside me with similar goggles. He’s part of the steam punks scene so his are more Victorian than my green rubber goggles. Ah, Dr. Hal just walked up and this guy knows him. Oh, more folks are showing up that this guy knows. Hey there. What? You’d like to put a sticker on my flowerpot that says “Grand Old Perverts” and has a GOP logo with a phallic elephant trunk? Why not stick it on the back of my jacket? Great! Hi five, St. Stupid style (with thumb in palm). Ouch! That was stupid.

Oh, Temple just yelled at me from up on his stilts. Howdy Mr. Stilt man. Oh, hey Bob! You’re looking stupid today. Is that a crazy Jew you’re with: the guy with the very fake beard, in robes, with a kippot on his head? What is Bishop Joey saying? What? The same shit from the last 30 years. Ha! That Luchador has a great sign: “Embrace peace, or I’ll kick you in the face!” There’s that other guy with money on a wire in front of him, forever chasing it. And that guy, I always see that guy at Mime Troupe events. His sign says: “I can’t afford an actual sign.” And the Planters Nuts costume guy’s sign: “We’re all nuts.” Guess the to totally naked guys walking by can relate! 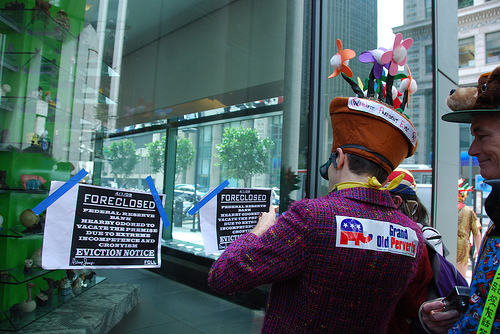 The First Station of Stupid: The Federal Reserve. Federal Marshals guard the front door. One has his arms folded, another has his thumbs in his belt. I start mimicking them and clowning; the belt guy lets out a good laugh. Bish Joey gives us the hard sell on the FCLL. No one’s buying it, not even for $2 a month. He then presents a foreclosure bill for the Fed. We’re evicting them for “Incompetence and Cronyism,” and Bish needs someone to post the notice. I see a guy grab the tape and signs so meet him at the window. He’s having problems with the tape due to his gloves so he holds while I tape. Ah, feels good to symbolically boot the Feds. Did they listen to us? Not yet.

Onwards to other Stations of Stupid. Ha, that Gitmo fetish costume rocks (two hot women torturers with a male detainee in a USA g-string and hood). Hey, there’s a woman with a button-down version of my jacket. Excellent fashion choice. Who are all of these normal people with cameras? Blue tape in your shot! Hmm? Blue tape over logos. Logos are stupid. Tape out that coffee logo. That Kinko’s logo. That Nestle logo. That Schwab logo. Boy, this is fun. Oop, the SFPD have finally noticed the parade. Don’t mind me as I continue to tape out logos. Oh, hey Lacy. You don’t have socks for the sock exchange? No worries, I brought a few from my orphan stash.

“Jump! Jump! Jump!” we chant to the ooglers in the windows above us. Do you think anyone will jump this year? I hope so! Wow, those two boys look like GI Joe. They even have cannon guns. That’s stupid… right? There’s Wavy Gravy himself, 70 and still in tie-dye with a shark on a leash. He’s up on John Law’s truck, with the Doggie Diner heads. So Cacophony Society. So Ben and Jerry’s. So Woodstock meets Wall Street meets Valencia St. So Stupid! Nice election year sign: “Quayle in 2008”. Think he has a chance with the GOP? The Banker’s Heart Station of Stupid. Blocked off once again, but not as bad as right after 911. Bank of America security thought we were going to destroy the place: they barricaded the whole side of the building off. We could barely throw our pennies at the Banker’s Heart that year. This is fine: worthless money into the dark pit of banker despair.

Stupid pennies. Cost more to make a penny that it’s worth. Dumb Feds.

OK, have to go pick up my hoodie from a woman who gave me a lift to Sprit Rock Saturday. Must hide my superman outfit and look presentable again. Back to the red pant terrorist threat. What? Oh, wow, he’s on a (planter box) ledge and might jump. “Jump, jump, jump!” Ahhh, he jumped! I did see someone jump this year. How about that!? OK, what time is it? Wow, only 9 minutes late from when I promised I’d arrive to pick up the hoodie.

OK, 15 minutes late total. She isn’t answering. Must be in a meeting. I’ll sit in the sun and text her. OK, just called and is on the way down. Thanks for the drop off. What? Your office just laid off 3/4 of its staff? You didn’t get laid off? You saved one person’s position. Nice. You’re trying to help others get jobs. That is very nice of you. What do you do? Cancer drugs? One just failed testing so that and the economy just took out your staff? Damn. What was I just doing? I was at a parade being stupid. I read a great quote from the Dalai Lama this morning saying that you shouldn’t take yourself too seriously during hard times. Look you’re laughing. Great. I wore a flowerpot on my head for the parade. Ha, you’re laughing again. Whew. Wonder if layoffs are going to keep happening all over the place. OK, we’re getting serious again. Easy to do that these days. You need to go? Fine. Ah, a hug goodbye. That’s California style greetz right there.