The Audacity of Desperation is an art exhibition, political action, and on-going dialogue. This show confronts, expresses and unravels states of desperation. Artworks by activists, artists, enthusiasts, and very concerned people, are made in editions of 100 with the intention of free distribution to audiences. In this way, these artworks will be activated outside of the exhibition space and in domestic spaces, on bodies, clothes, bags, and in public spaces. 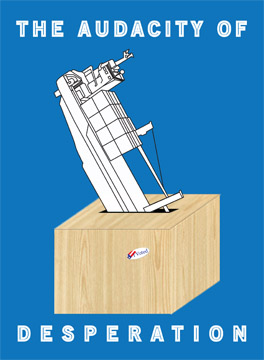 I want to see change happen. The last seven years has been a mess for this country. My father admitted to me that I was right all along about Iraq and Bush’s scheme to finish what his poppa started. The Federal budget is squeezed so California’s budget is a mess. This means that San Francisco’s budget is a mess too. Reagan’s trickle down theory from hell. Sure, times are tough but people are getting by. But as the cost of food, rent, and utilities continue to climb, people are working twice as hard today to make the same amount of money they did in the 1990s.

I see how Obama has glazed over the folks here in San Francisco. I caught the fever a bit early in the primary run, mesmerized by his speeches on TV while I was home in South Carolina. Hearing him speak in Iowa a few years back, he had us. What a ringer as the sideshow carnies say. His conviction and drive to change makes me say “yes we can” along with the other folks. Shephard Fairey is creating street art for him. Graffiti is going up here for him: stickers, posters, stencils.

But I’m starting to feel like a number in a demographic. While he caters for votes in NC and PA, the Dine are still starving in NV. The folks in New Orleans are still living in filth from Katrina. Here in San Francisco, programs for the homeless are starting to close up due to lack of funds. Lay offs quietly scar the corporate landscape and the investment bankers who pillaged millions are still raking it in.

When I saw the call for art for the Audacity of Desperation, the first image that came to me was of a man in front of his flooded house, holding a sign. What’s on that sign, I asked? It could be a lot of things. I made the vector art and punched in into buttons, using my roomie’s fine-tipped pens to draw squatter and anarchist logos on the sign. I wrote “No Money Down” and “Fuck FEMA” on the sign. I drew an umbrella and dollar signs on the sign. And I mailed them to the curators for the IL show.Â  I threw in one of my last stickers I made last year for fun.

So, once the book project settles, I’m going to make a second batch of buttons. This time, a woman will be in front of her flooded house holding a sign. I’m going to order some more stickers too, since the curators wanted to have those in the LA show. I may even head down to LA to watch the presidential election. If Obama gets the nod, and loses, people will cry. Four more years of the GOP! McCain will surely die and his VP will take over. Who will that be?

But my pessimismÂ  for politicians runs deep. It’s hard for me to get into party politics. As a young child I watched my father work his ass off for his struggling business. Every time he had to pay taxes, he’d groan. Now, most of those taxes go to the Military Industrial Complex. The larger corporations get some of the money from subsidies. And, over the decades, I’ve seen no difference in who’s in office. Sure, Obama or Hillary are a tick or two to left of center. Sure, those small ticks will make some small difference. But it’ll still be business as usual in DC. And those investment banks are trying to figure out what the next squeeze will be on the consumer.

This is why I struggle with money and jobs. This is why I don’t find the logic in politics. This is why I’m skeptical of Obama. Folks are still desperate in this country! From FL to WA, to the natives in HI and the wage slaves in MI. Things have shifted in the last 30 years, so we’re all a precarious lot. Think about it a bit and you’ll know what I’m getting at. I’ll vote, sure, but I hope that whoever gets in office will prove me wrong.

Until then, the metaphor of a person in front of their flooded house is stamped in my mind like the hurricanes, floods, and tsunamis that have wreaked havoc across the globe. We’re in it together! Let’s plug this boat up and begin to think about real changes in the world.