Chaos in the Streets of CardBurg!
Dozens of buildings destroyed during sudden riot! 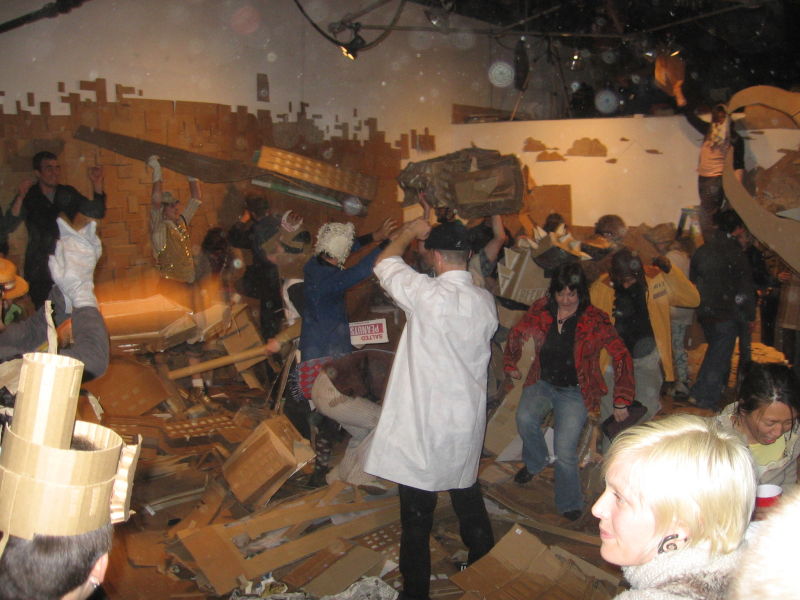 photo for the Bugle by Joe BoxCutter

Citizens who have been evacuated from the destroyed port city remained in a daze after usually somber DuckSquatch Day celebrations turned unusually rowdy on Friday. For the first time ever, DuckSquatch demanded that the Mayor and Pastor give him a virgin to take back to his lair in Mount Kilimancardboard. The Mayor and the city complied, having a grand Beauty Contest to find the winner who would get to make their fate in the neighboring mountains.

But the citizens of CardBurg didn’t necessarily comply with the planned post-Beauty Contest festivities by the ruling administration. People seemed to become tense when the Mayor’s office refused to give a definitive time for when the “End of Ages” actually began. “Later-thirty,” the out-of-town help was instructed to say. “Something-ish o’clock,” they also stated.

CardBurgans were not amused, and began to express themselves first in the expansive suburbs through raunchy underground surf punk shows, horse jousting, and what quickly became inflammatory wheeled couch moshing. The hired help attempted to control the rising disdainful sentiment, but the mob reacted to this authoritarian heavy-handedness with an act bordering instigation. The outlaying buildings of CardBurg, surrounding the punk band, soon fell in the hands of blissful mobs intent upon bringing an End to the era of a simple city made from paper, glue, staples, and screws. The buildings became uprooted and were flung into the maddened crowd of couch unrulies. They were destroyed in short order.

Unconfirmed reports state that a disgruntled beauty contestant, Chicken John, sought permission to destroy the hub of CardBurg’s financial dealings, and was rebuked by the Cardboard Institute of Technology (CIT) leadership. “Wait until the band’s last song,” the CIT spokesperson replied. Chicken misheard the response, so not knowing that CIT wanted to enact the ritual transition of the virgin to the revered DuckSquatch, Chicken and several accomplices charged into the city’s Financial District. Once there, they took the CIT building itself and drug the smoldering remains into the outlaying regions of the city. The awaiting mob attacked the now ruined symbol of devolved technology with glee, ripping the cardboard landmark to shreds.

Several waves of maddened citizens soon rushed the whole city, and a dusty, systematic destruction of CardBurg began. So commenced the first pages of the story that is the End of Ages. Before the ink could dry on the second page, the DuckSquatch appeared with a several CIT Board Members, and they too joined in on what would quickly become the complete break down of all functioning services within the city limits.

Meanwhile, those who didn’t join the inner city riot continued a wonton path of destruction in the outlaying areas that only past tornado damage had achieved. After the chum of the city was freshly digested, the roving crowd of paper throwing looters died down into a post-riot stupor. A pair of glasses was lost. A woman clung to the side of the razed area and screamed. DuckSquatch sat where his lair once stood, and was consoled by a French tourist. God’s Ladder was the only standing structure that remained. All else has been reaped to the ground in only about 20 minutes.

The Mayor’s office cancelled all other DuckSquatch Day Celebrations and refused to comment on the aftermath of the hyperreal experience. The Mayor was then seen wandering among the ruins, mumbling “Well, that was beautiful, but it wasn’t supposed to happen that way…. Oh, well!” The local Red Cross has set up an emcampment for the surviving citizens of the flattened city. In a miraculous turn of luck, no one was maimed or injured during the wildness in the streets. The next music act came on without a hitch while the hired help cleared the dust and debris (well, a tiny amount of the huge pile of cardboard). The ignited melee went down into the annuls of future history books everywhere, or at least that is what is supposed in the years to come.

The Mayor and the CIT have insisted that CargBurg will rise again. For now, they have begun to enact recovery programs set up for situations similar to those that just befell the doomed skyline. Recovery programs entail several levels of implementation. Crews have already begun the arduous task of de-staplining, unscrewing, spackling, and hopefully recycling a huge pile of debris.

While visiting CardBurg’s ground zero, the CIT chairs poured over the wreckage, assessing the reaction and subtraction of their beautiful works. Laughter was heard though press was kept away from their more creative moments. No media releases were available at press time, though one insider who asked to not be identified told the Bugle that “I wouldn’t be surprised to see the CIT make an even bigger CardBurg next time. They have the momentum from this amazing version to dream up anything now!”