I recently mentioned that Big Tadoo Puppet Crew’s Jonathan Youtt is in the middle of making two chain-powered crankies for their upcoming in-school tour. At first I thought he had an engine in mind, other than a human crank, but was wrong on that account. I showed the toy mock in an earlier posting, and recently got the call to help/document the set up of the real, steel-poled deal. I didn’t get to stay around for the final set up due to running out of time on the production end, and the curtains couldn’t get set due to a low ceiling in the xtian studio where we set up the devices. But with a bit of troubleshooting, Jonathan and I got them up quickly, with little problems. The velo on the second scroll was welded too high for the crank to connect to via the chain, but Jonathan got Michael Christian to quickly weld the crank to allow it to be adjusted to the scroll’s velo height. All in all, a fun afternoon of crankies goodness.

Here are the dozen or so photos I took during the set up: 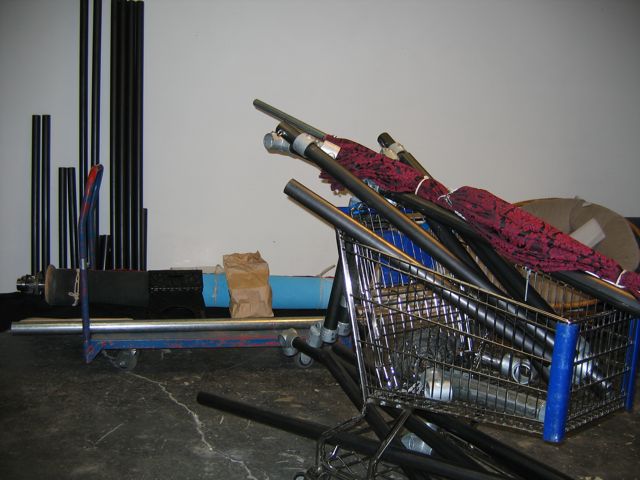 All the parts of the two Big Tadoo crankies. Jonathan cut and drilled steel poles for the frames. The hardware for keeping the poles together aren’t shown. 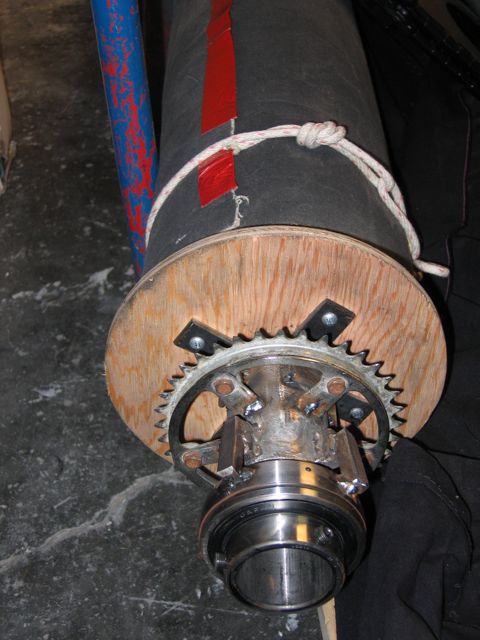 Close up of a scroll velo set-up. Only two of these exist. Look like rocket jets to me. 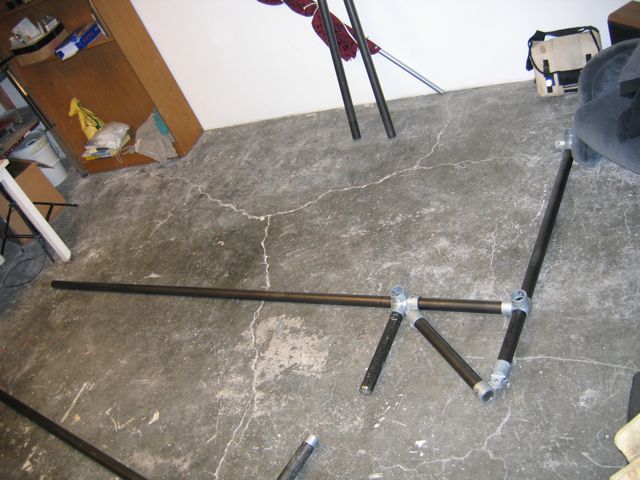 First step, lay out the side pieces. Jonathan had the bases preassembled on the first cranky. 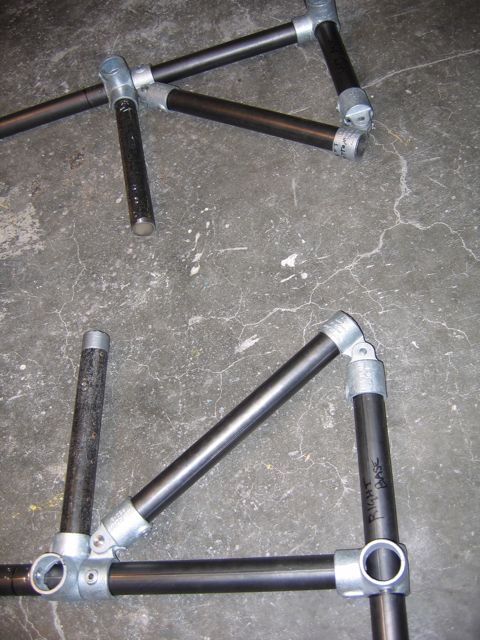 We had to figure out the base assembly for the second cranky, but the first was assembled for an easy start. 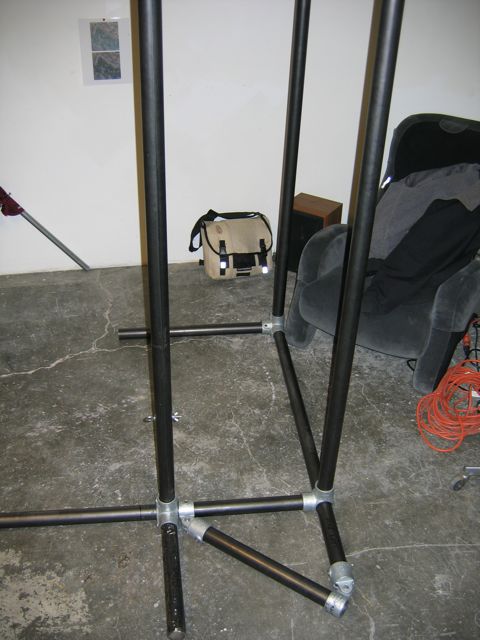 The horizontal support beams get installed next. Jonathan realized that only two were needed (after using three on the first cranky), so we had to troubleshoot the second cranky assembly. It all worked out! 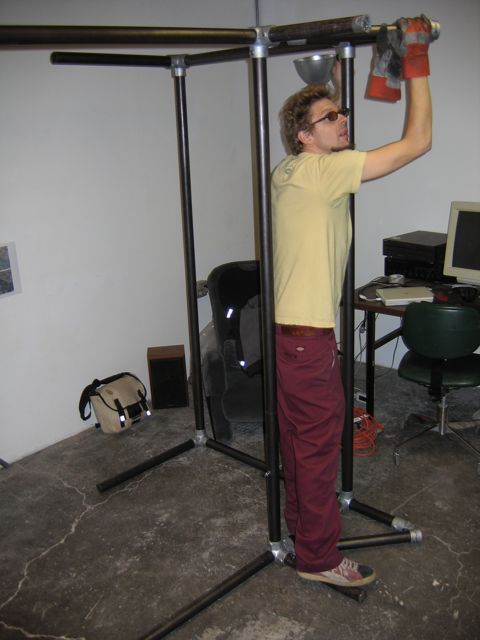 Jonathan cranks the hardware to tighten the poles. Only three tools were needed: two different-sized hex wrenches and an adjustable wrench. 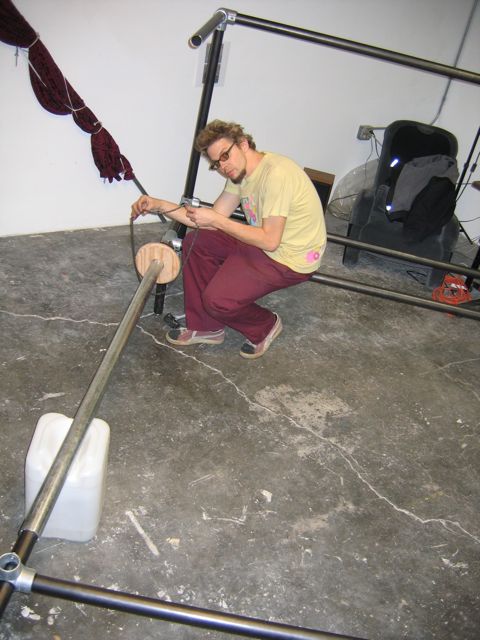 Before putting on the top horizontal support, Jonathan slides on the chain which will connect the two crank velos. The lighter steel piece is the empty side of the cranky scroll. 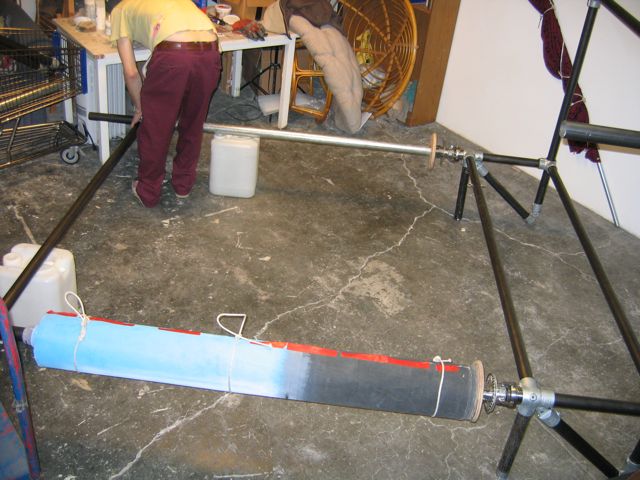 Here’s a shot of the almost-assembled cranky, with the scroll piece on. Note Jonathan’s professional rope ties on the scroll (he’s good with knots). 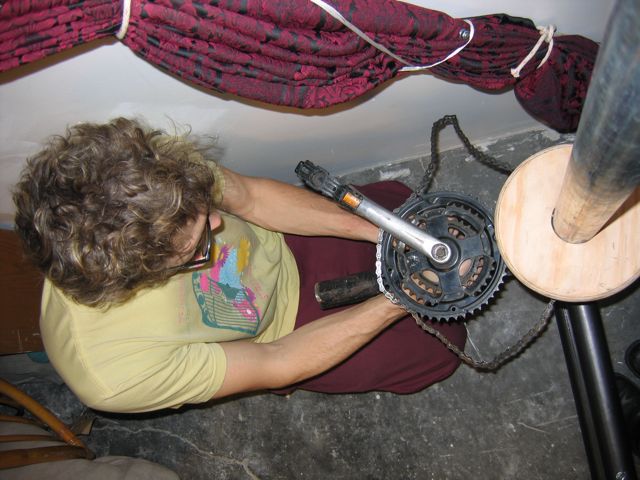 Next, Jonathan inserts the actual crank. Looks like a bicycle velo, but only has one pedal. I held the vertical poll on the right so Jonathan could get better tension on the chain. 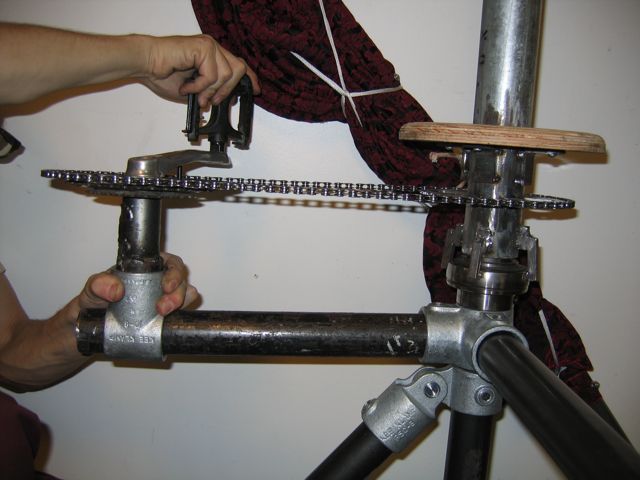 Jonathan tests the crank device. He will have to troubleshoot tension issues as the troupe runs through the show. He has a few ways to adjust for more tension, but may have to install something that will work with the moving canvas to keep it from sagging. We’ll see what he cooks up. 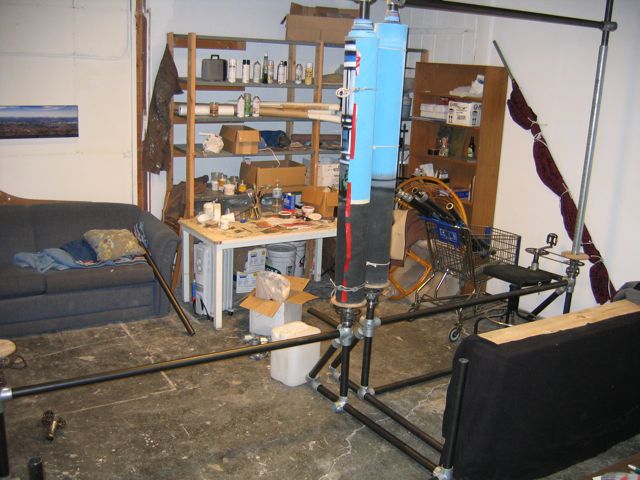 Here’s a shot of the two crankies together at last. Note the dressed wooden scaffold piece, which will be a puppet stage (and used to install the curtain). Note as well that the scrolls begin center stage and scroll away in each direction. This is how the characters will get to school in the Big Tadoo story. Finally, note the missing lower horizontal piece on the cranky where Jonathan has the scroll. That was the piece that Joathan realized wasn’t needed for the soundness of the design. 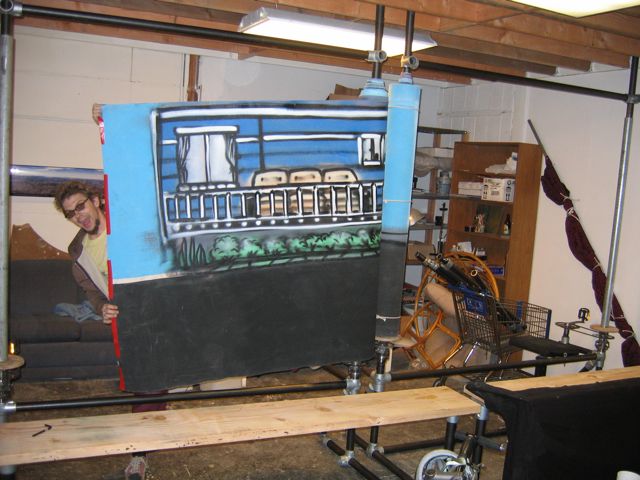 Jonathan adds the final touch by setting the scroll on the empty piece. If the ceilings were higher, we would’ve installed the curtains. They hang off of the top horizontal pole.