Things really started getting precarious for me during the week of April 25. That week, I worked a total of 4 hours for only $30. As the check balance continued to shrink, all the jobs I applied for seemed to go into the deep circular file of the trash can. I had nibbles and upcomings: a temp position at PC Personnel with a booked shift May 3 and potential shifts at Yerba Buena Gardens.

But Al’s Comics had become my meager bread and butter for the last few weeks. Al, a great guy and struggling small businessman, needs about 5 full-time employees to stay on top of his work load. Instead, he works nonstop and has a small group of folks who help him out. I showed up every Monday and Tuesday morning for a few hours to learn the register, some of the basic tasks, and help him help me. We’re both in tight situations, so he could only pay me a low wage. I didn’t mind because it fed me for a few days, got me out of the apartment, and got me access to reading comics. Al’s intention was to get me trained to work full days so he could do many of the tasks that he was behind on, and I was headed that way.

Later that Monday, I jumped onto Craigslist.org to see the job postings. I’d been applying for all kinds of jobs for weeks an only gotten the two upcomings. Today felt no different, except for a tingle when I applied to Teatro ZinZanni for a part time box office opening they had there. I was qualified, sent them my creative cv along with a simple cover letter, and expected to never hear back about it. An hour later Morgan, the box office manager, called me back for an immediate interview on Tuesday. I had two hours scheduled with Al so made it for 3pm.

The interview went great. Morgan told me 500 people had applied for the job and the first cut to 250 happened because half of the applicants didn’t write a cover letter. Morgan stressed the immediate start date of the position and the extreme flexibility for all of May. I assured him that I was very flexible for May, having almost no prospects of work and only potential shifts temping and with YBG. At the end of the interview, he asked me if I’d like to go to the show that Friday. A $135 ticket for free? I’m there! He asked me to describe the show and em it to him.

Meanwhile, YBG’s manager sent me an em to confirm my shifts for the first half of May. Two of those shifts I was given were for the Star Wars premiere benefit party. Being a lifelong SW geek, I HAD to work that shift, but couldn’t commit until the TZ job situation worked itself out. As the potential of my being hired by TZ grew, I had to contact Steve Cho at YBG to tell him that my nonschedule had become a maybe schedule so he was free to give away my shifts if the delay in confirmation caused any problems. He understood and said that I could contact him once my schedule was worked out.

Visiting Al with the updates got me even more excited. He was happy for my strong job nibbles and understood my maybe quitting the 4 hours I was working. At the same time, I kept telling him that I’d help him post items on eBay and wouldn’t mind taking digi pics of the stuff he wanted to sell. The first run was an autographed Star Trek card and a autographed, limited comic book. I eventually helped Al get into eBay, PayPal, etc. and post those items.

The Friday night at Teatro ZinZanni was amazing. I’d been years ago, but this show had different performers and a different menu. There was a great rope act performed by the busgirl. She kept getting tangled up and blowing the performance, but it was all intentional clowning. Kevin Kent, Cookie the chef, kept me in stitches the whole night. His clown bits presented each course and got more absurd as the show progressed. I had a good time and figured that I’d at least have this night to show for the interview process.

The following Monday, I had a Sunday em from Morgan asking for a second, immediate interview. We booked it for Tuesday after my first temp shift with PC Personnel. At that interview, I met the other box office workers. I gave them hard candy as bribes and found out that Candice knew Brian Livingston and had gone to see the Funky Puppet Supper last November. I left there feeling great about the interview but still had no expectations.

Later that night, while waiting for the Fillmore bus to go see Gang of Four at the Fillmore (a writing assignment I took for Indybay), Morgan called me and offered me the job. I began immediately the next morning at 10am and couldn’t say no. I’d get the schedule for May at noon and couldn’t change the dates, so I could then work out all of the other scheduling issues. I got so excited at the bus stop that I kept interrupting Morgan. I finally had a steady gig in show business like I’d wanted for months!

My commute was fresh and exciting. Riding the old, historic street cars would be a fun way to get to work each day. Later, I found out that the F Line could be unreliable (full cars pass you by, you can wait and never get a train, etc.), but the commute down the Embarcadero made me feel like I’d just moved to San Francisco. 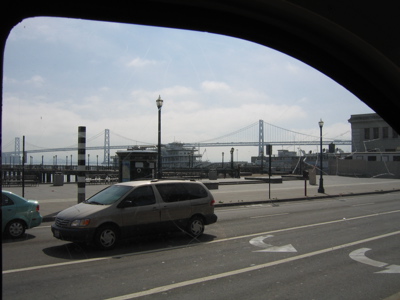 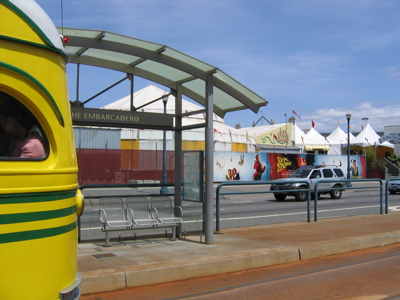 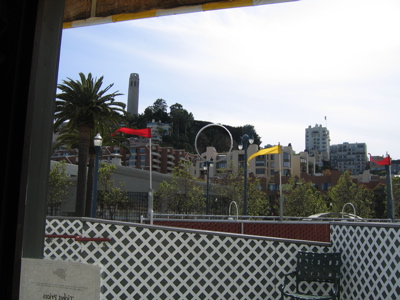 There’s a good bit for me to learn, with alot of paperwork and details to remember, but I’m already picking it up and enjoying the job. I went out with the box office staff my second day at work (Cinco de Mayo) and had a tequila shot to celebrate all the promotions and hirings. Everybody works hard and has been great in helping me out. I’m sure more thoughts about my TZ job will pop up on here in the future.

So what about the Yerba Buena Gardens shifts? Once Morgan gave me my May schedule, I immediately called Steve Cho to confirm the two Star Wars shifts. They were the only ones for the whole month that I could fit into my TZ schedule, the movie premiere benefit making May 12 a 14 hour day! Before I even clocked in that day, I knew that I was going to have a good time. There were stormtroopers all over the Metreon. The Emperor and Darth Vader were wandering around, as well as Han Solo and Chewbacca. Even R2-D2 crawled around the tent area. 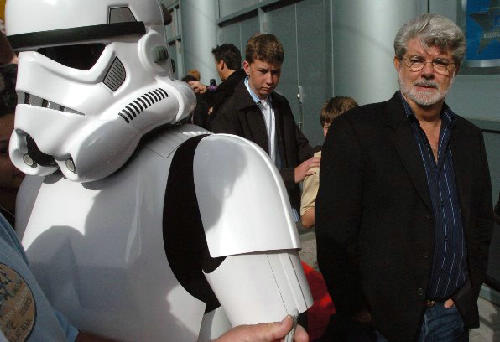 George walks by my pass-checking station

I spent most of the night at the gate to the tented area checking passes and keeping people from wandering in to the private area. George Lucas walked by a total of three times and stopped once to sign autographs after the show. There were other stars there, but I had no idea what they looked like. The work wasn’t that hard, and I was given breaks to eat the catered food in the tent and sneak into one of the viewings (I caught 20 minutes worth and will only say that R2-D2 kicked ass!). I called my childhood friend Mark to tell him where I was and what was happening. We geeked on it for a few minutes before I had to go to work. 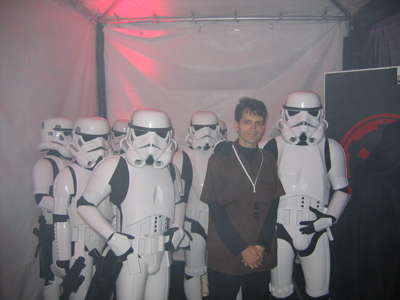 “This is not the worker you’re looking for. Your business is done here, move along.”

Things got a bit crazy after the viewing. Mayor Gavin Newson called an auction of Star Wars stuff, sounding extremely happy, yet fake, while he did it. This was for charity, and raised thousands, but ended oddly with some other guy saying “Live long and prosper.” Gavin covered the gaff well with a “and may the force be with you.” 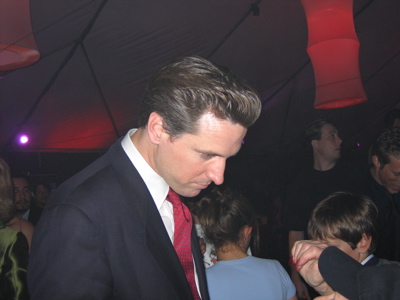 Pod called me to go out for a drink and I told him to grab my camera and get his ass over here. He got to shoot a few pics of me with the stormtroopers, and have a few stiff drinks, but didn’t make it in time to get a good shot of them inside the Metreon (ah, the irony). Two other friends wandered by and ended up inside. I saw them doing the electric slide and the YMCA…to my dismay. One faithful fan, who wore a suit and had tried several times to talk his way in, finally got in at the end and got one of the leftover bags of schwag that the attendees walked away with.

So after only one week of having a 4 hour gig, I found myself working over 40 hours. The sleep, meditation, and visits to CELLspace just didn’t happen. I did keep up with the Tai Chi but had to run down the Embarcadero to catch the BART train to get to class my first Monday at TZ. Damn F line…

And what about Al? He’s slowly getting hooked on posting items for auction on eBay. I met up with him this past Sunday to shoot some loot for him to post. Checked in on him while I was doing laundry and the Lily Munster model was hot already. I’m now on call to help him with computer training and to shoot loot for him to post, so I’m glad I’m still able to help him out. 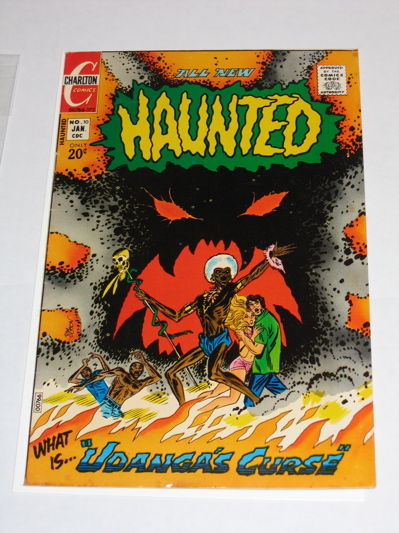