The first full day in Seattle started with the usual: coffee and fruit-laden cereal. This morning, Ruth’s daughter Gracie entertained us for all the attention we could give her. She’s quite a character at 6 years old, so she jumped rope for us, pulled out a big bucket and got goofy with it. She also had a great time jumping around on the futon with my packed sleeping bag. After the logistics and routes got worked out, Chris and I strapped on the bike bags and hit the road for Elliott Bay Books on 1st Ave downtown. 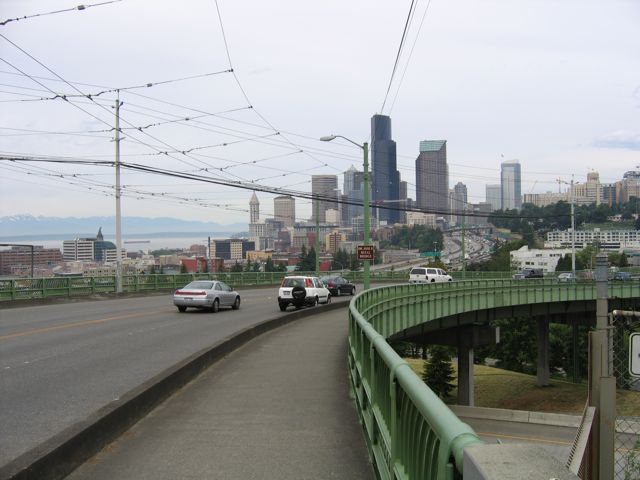 We went through a diverse part of Seattle, with condos going up all over the place, and hit the Dr. Jose Rizal bridge. There was a great view of Seattle from there, and then we caught views of the mountains on both sides of the city. We rode through Chinatown, more utilitarian than touristy in this city, and we missed Jackson Street where we would’ve gone straight to the bookstore. So, a bit further down the road, we turned left into First Hill instead. A grungy part of the city, First Hill had stencils and more potential for finding stencils. I stopped a few times to snap some photos. We rode by the Convention center and Chris felt that we’d protested this way in 1999.

We were going to meet up with Kim/SOULE at Pike’s Market, but went down the hill to check in at Elliott Bay, and leave my bags. Chris decided to stay in the cafe and catch up on computer time. I took a free bus back up the hill and met up with Kim.

The last time I was in Seattle was for the 1999 WTO protests. I didn’t do much touring around then because my time was filled with protests and organizing for more protests. Pod and I ended up marching with Chris and the Committee for Full Enjoyment on the big N30 actions against the first day of the WTO conference. We met up at Pike’s Market early that wet and cold November morning and then snake-marched to the Convention Center and shut the WTO down. Today, tourists thronged the Market, watching the workers toss fish. It was tourist bedlam, worse than Fisherman’s Wharf. I had to call Kim to find her in the masses.

Kim works at a gallery downstairs from the main market, so we stopped by and checked things out. Her work was up as was local artist Greg Boudreau’s stencil works. We walked through Poster Alley to look at the art and then Kim took me to a gallery that had larger works from Boudreau. We grabbed lunch and showed up to Elliott Bay for the 2 PM slide presentation. The turn out was a paltry six people, but I gave the presentation and sold a bit of art. Guess there’s other better things to do on a humid, summer day in Seattle. Maybe my audience had done the nude Solstice parade early in the morning and was too drunk and body-painted to attend. Either way, I still enjoyed sharing the stencil love.

Ruth came to the presentation and insisted on taking Chris and I to meet an artist that she knew. We enjoyed meeting him and seeing his work. Up the hill on 1st Avenue, the Underground Events Center was getting a stencil wall going before my presentation even started (maybe that’s where my audience was), so we left the studio and headed to the space. I chatted with Josh, the curator of the space, and he has an agreement with the landlord that is similar to CELLspace’s former Mission Market agreement. There’s a nonprofit developer who needs to raise funds to build low-income housing on the UEC property. Until then, they had a basement that was unrentable, so gave it to Josh to use as a community center. It’s a large space and has a squatter charm to it, and the stencil wall was going up in the adjacent parking lot. I told him that he should encourage artists to paint murals in the lot and explained the Precita Eyes mural project at the Mission Market. He was jazzed on the idea and hoped that the stencil wall would be the beginning of this. Josh also has a Punk Rock Flea Market at the UEC space and it will be in the parking lot this summer.

From L-R: Kim’s part of the collab wall; Chris cutting his Full Enjoyment stencil; Ruth looking fresh and painting her comment; Kim assists Lars and another painter with a larger stencil

We stayed there a good four hours and painted the wall. Kim knocked out a part of the wall and Josh had made a large rat stencil as well as a large Mona Lisa with-a-mustache stencil. Josh had tables set up with xacto knives, cardboard, plastic, and pencils, so people were showing up to make stencils. One woman made a bat piece while another made a cartoonish face stencil. Chris got into it and made two text stencils. Ruth even had something to say and made a serious stencil of text that fit in nicely with the “Abu Mickey” stencils. I threw up the globe stencil as well as some bikes. Kim and I also made filler stencils to flesh out the wall and connect all the disparate images. Towards the end of our stay, Ruth got us some pizza from across the street. Soon after, our pizza box was cut out and used for an iconic mural on another wall. Then stenciling started to go up the steps to the sidewalk on 1st Avenue.

The mural revolution had begun for the Underground Events Center!

Chris and I left to go on a bike ride and then realized that it was almost 9 PM. The solstice daylight at night had once again messed our clocks up. We had to go grocery shopping before the stores closed so hit many hills to get to a Trader Joe’s Ruth told us about. One block down from TJ’s was a local coop. We decided to shop there and Chris predicted the exact price of all our groceries (under three bag’s worth): $110. We didn’t get a prize for the exact guess……

Taking the groceries back to Ruth’s we continued to hit many hills. Hard schlogging in Seattle. After ups home, , with a few downhills to bomb, we hit one last climb right before getting to our crash pad. Whew…. Chris had a local in-studio radio interview early the next morning so crashed early Saturday night. Ruth and I stayed up late chatting and becoming friends. We figured that we’d get along since we’re both friends with Mark. And we where right.