Arrived to Olympia (Oly as the locals say), driving by Washington’s capital building and grounds to get to Last Word books on 4th Ave. We had to get into the city before 5 PM, because Chris had a call-in interview with two DJs on the East Coast. Chris does a great job getting radio interviews! We showed up to Last Word books to drop our gear off and meet the people working there. Nice fellows excited to have us. They’d spent a month looking for a projector and had no idea that Chris brought his own. They didn’t ask. Last Word had a comfy feel and would maybe allow about 20-30 people to fit in the space. They told us about the free graffiti wall behind the store and also gave us a tip on a place where we could get a salad. 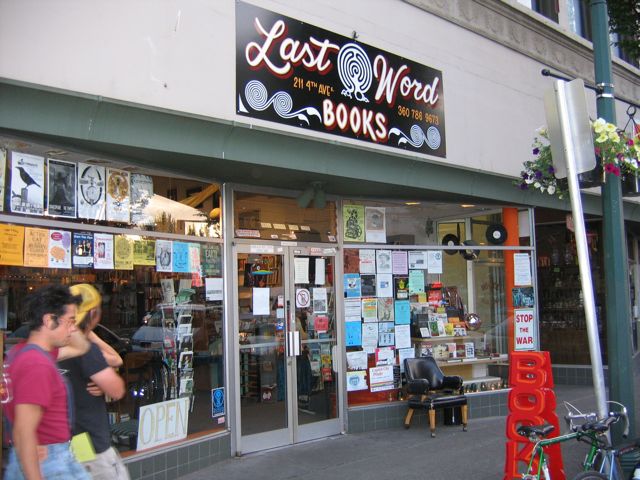 Chris ended up in a park in front of City Hall for his interview and I went stencil hunting. Found about half a dozen. Kim called and her family had gotten into town via Seattle. She was going to start getting up on the free wall behind Last Word. So I walked back, grabbed my own stencils, and joined in on the fun. One of the book store people had painted “Stencil Nation” in a scrawl on part of the wall. I added two stencils above it for fun. Kim started knocking out a great mural, using her skull stencil first to make a pile of them. Chris showed up and noticed a great gold tooth high up on the wall. I walked up steps to photograph it and then we headed to the place to eat. 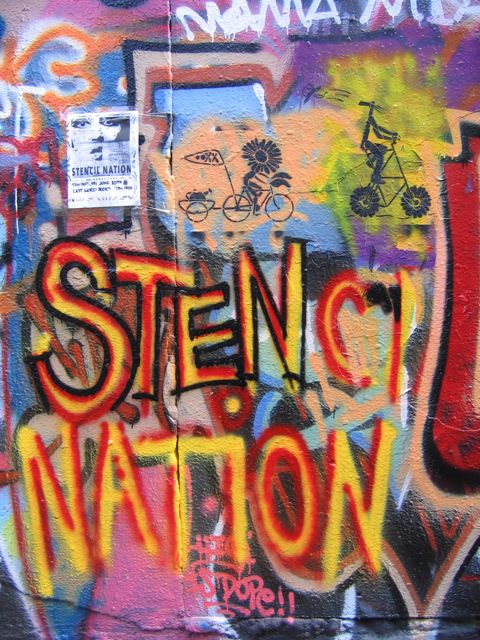 The grungy eatery, with a dive bar in the back, took our orders about five minutes after we arrived. At least we had the “Remain in Light” to listen too while we waited to place the order. But it took them about 40 minutes to get the food to us. Chris and I started getting antsy because of our event. I got my Thai salad first and started eating it fast. Chris’s Philly cheese steak finally arrived and he inhaled it while I paid the bill. Good food, but an understaffed place with a crappy short order station!

Back at Last Word, we set up our stuff. Kim told me that her mural back on the free wall had a square section of it cut out with a box cutter. A woman needed an artifact of Kim’s work so bad, she took a piece.Â  A few people show up early and actually buy some art from my Budget Gallery gas fund exhibit. We were told that Oly time meant that we should start 30 minutes late, so we did. 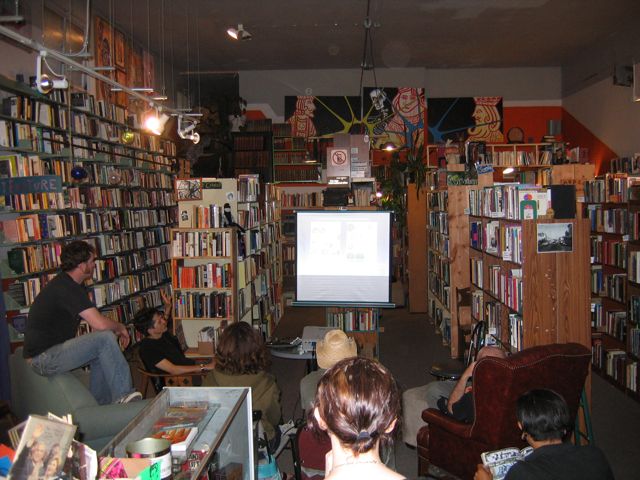 And about six people attended. Chris and I had to present out books together at Last Words. We’d discussed how we were going to tie the two books together, but once Chris realized that the six people where there for my part of the presentation, he blew through his in under an hour. I had projector problems so couldn’t work off of digital notes. I just scrolled through the intro and then ad-libbed the rest of it. I finished my presentation because the folks were all into seeing it to the finish.

I then fielded some questions, one of which had to do with stencil graffiti animation. I mentioned the amazing Blu video that was making the rounds and only one person had seen it. So Chris found it online and we watched it. Afterwards, Kim decided that she wanted an artifact of her own mural on the back wall. We went back there and all of my stencils had been gone over (sunshine at 9 PM? great time to spray graff on the free wall!). Kim got the box cutter and made the woman cut another piece out for her. Another gold tooth went up as well, while the artist D-FENS was ditching his job to hang out with us. 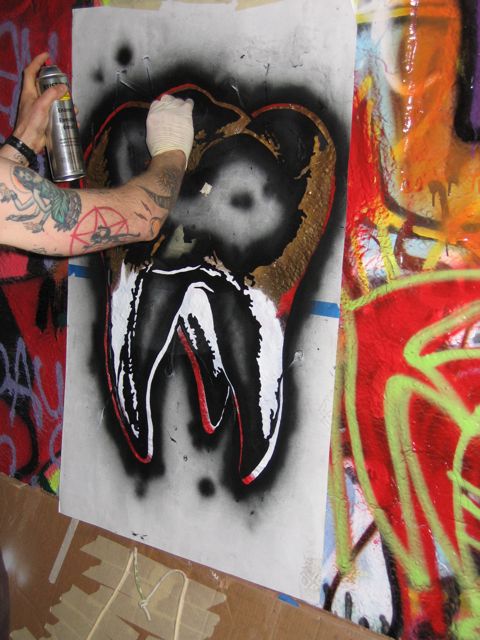 I ran back inside to pack up my stuff and then came back around about 10 minutes later. Kim had left, and about three other people, including D-FENS, had a piece of Kim’s mural. A person was using their hands to pull off a piece as I said thanks and goodbye to them. Texted Kim about the final destructions and we both had a goog lol moment over it.

Chris lost energy after filling up with gas, so I drove into Seattle. We hit the city center around 10 PM, and dark blue strands of sunset still remained on this long summer day. Behind us stood the brief moments of time spent in Olympia. Where folks now hung drying mural pieces on their walls as a souvenir of the “stencil guy’s” visit. A summer night passed while hanging out in an alley.Â  And I learned a lesson: people had other plans that night, so the crowd was small. Chris gave this event a 2 out of 10 rating because no one showed up for him. It became the lowest-rated event of his tour. I wasn’t too upset. I’m still living my dream on the road, making new friends, and making stencils. Maybe Elliott Bay in Seattle will better on Saturday.