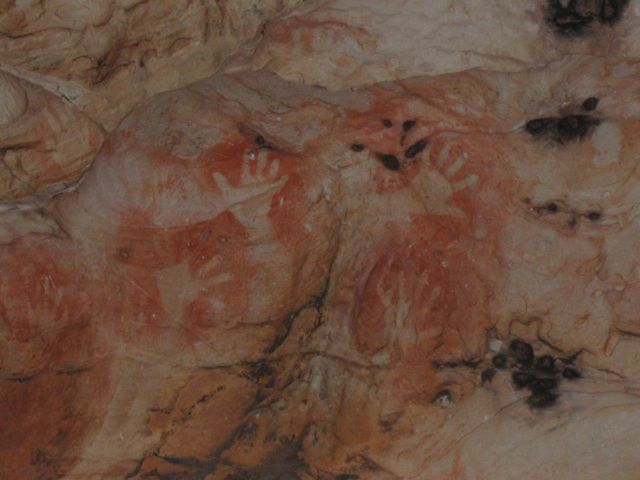 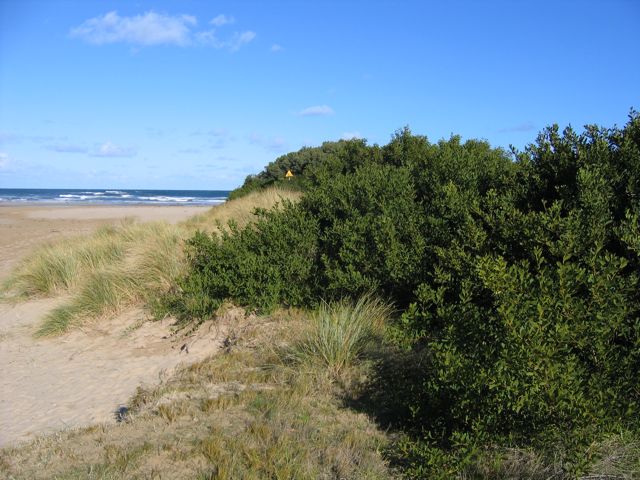 View of the Southern Ocean along the beginning of the Great Ocean Road.

Several Melbourne locals told me to take the long way to Grampians National Park (the Koori/Aboriginals named it Gariwerd), so I picked up my hired car (This was my best car rental experience ever. Bargain Wheels Car Rental gave me great service with no hassles. The first time I didn’t feel scammed by a car rental company.) and got directions to Road B100/Great Ocean Road. After getting turned around in the city, I was on the road towards smaller cities and the Southern Ocean. When the locals told me it was the long way, they weren’t kidding. The trip offered the following: breathtaking views, run-ins with a fox and many colorful birds, a Vic PD drunk driving breathalyzer check point (I had no idea what was up with that: the cop wrote down my car and drivers numbers before pulling out his plastic tip and plugging it into his machine. Wonder if the locals queued behind me were sweating it!), a spin through a rain forest, and several stops to take breaks and check things out.

I hit Warrnanbool after sunset with dozens of km to go north to Halls Gap’s youth hostel. I hauled ass up empty country roads, getting turned around a bit at intersections, but driving in circles to read all the small direction signs. At a few points I saw a huge rabbit (foxes and rabbits were imported by the English for hunting sport and are now invasive species), and a huge bat. I ended up on one road that would suddenly go to one lane. Swerving into the slot kept me up better than coffee would.

Finally rolled in to the Hostel around 8 PM, after about 7 hours of driving. The Halls Gap Hostel brands itself an eco-hostel, complete with solar heated showers, composting for chickens and worms, and many signs asking for energy and water conservation. Their flyer claims that their “techniques… reduce consumption to approximately 50% of a standard hostel.” I checked in, drove to the nearby bottle shop for a few take aways, and came back to cook a great spaghetti meal. Took a shower in the freezing bathroom and soon fell asleep. My roomie woke me up snoring loud around 4 AM, but I fell back to sleep and work up at 8 AM ready to find rock art.

Had my regular brekkie and then stopped by the Halls Gap Info Office to ask about rock stencils. He pointed out a close location, but the stencils weren’t too old. Nothing has been carbon dated in Grampians the ranger told me, but two locations on the other side of the park had layers of rock art. So I drove northwest, stopping for a brief hike down to MacKenzie Falls. Along the way, I saw cockatoos (ga madj in the local Koori/Aboriginal dialect), many kangaroos (almost hit one), and other colorful birds (parrots at the hostel). Missed a turn and got turned around again, but managed to find Bellywing Road, which led to both the sites I wanted to visit.

Went to Manja Shelter first and had a great hike out to it. Since I’m here during winter, the pipes froze at the hostel last night, I was mostly alone all day on my journey. Hiking up to Manja Shelter, I was totally alone with wind and foul as my soundtrack. Didn’t know that a shelter was where Koori have lived for thousands of years. The shelter had a huge, barbed-wire-topped fence keeping vandals out. I couldn’t find any hand stencils, but a sign on the fence said “look carefully” and 24 stencils red-ochre stencils could be seen. Ah! Not too faded but the same color as much of the rock face it was painted upon.

Felt good to finally see some tribal hand stencils for the first time. I know that the larger concentration of Koori stencils could be found far North, but Gariwerd had at least 100 rock art sites. Only five are open to tourists, so here was one that had well-defined hand stencils to photograph. I realized that I had finally fused together the two things I loved to photograph the most: stencils and nature. And I was out in nature hunting stencil art, which amused me at bit. No alleys out here except for the slits between rock walls. The hunt was on, and concluded with what looked like children’s hands stenciled on the wall of a place where humans have visited for generations.

After a great lunch and a little exploration, I hiked back to the car and drove to the next location. Right at the entrance to Manja Shelter, a strip of private land told an amazing story: one section pine plantation, another normal forest, and a third section totally clear cut. Had to take photos of this slice of capitalist thinking in the Australian woods.

Layers of different rock art on the Billimina Shelter may indicate separate epochs of time, or at least many generations of peoples making the images.

Billimina Shelter lay just past the Baundik camp ground, and I again found myself alone with nature. Billimina seems to be the most important rock art site in Gariwerd, but it had no hand stencils. Two Koori clans lived in the Gariwerd region, and the one in the north left hand stencils. So Billimina was a site of the southern tribe’s markings, which were interesting, but not stencils. Glad I got to see the mixed art at the first site. With the daylight ending, and about 60 km to drive back to the hostel, I decided to call it a day hunting and head to the Brambuk Cultural Center.

The center, organized by five Koori clans, helped tell the story of the people who lived here at least 45,000 years ago. They had a map of massacres for a small period of time, told of how the Koori lost their lands to Europeans, sometimes after fighting to protect their connection to country. Their connection to nature was explored and told, and the Center itself was designed in a way to reflect their beliefs.

Back to Melbourne in the morning. I hope to stop by the Bunjil Shelter for one last go at finding rock stencils. Not enough time to thoroughly hunt like I do in the urban wild. Two sites down, 98 to go in the Gariwerd!