Just landed in Seattle and am getting behind on the blog postings. I will wrap up the Portland musings today. No internet here at my host Ruth’s place but hope to find a connection tomorrow and post this up.

Thursday morning was filled with getting stuff together for Friday’s departure. Did some laundry, made some phone calls, checked email, packed some things up, refilled my markers with ink, and didn’t drink a morning coffee for the first time in a week. Also chilled a bit and tried to stay cool during a hot day.

Klutch came by around 1 PM and picked me and my bike up. He was in a great mood because he had just sold some art to a Texan. Klutch could now pay up some bills and catch up a bit on being behind. We drove downtown and had a great Indian meal (a huge bowl of rice and veggies for about $7) out of a food cart on Yamhill. 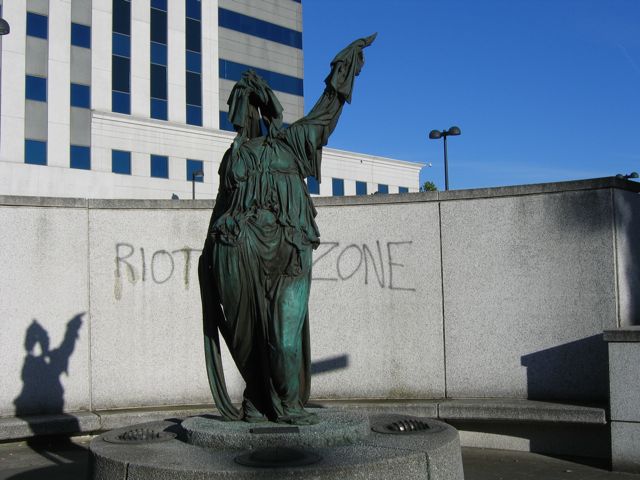 We then walked over to Powell’s City of Books and hooked up one last time with Kevin. We worked out a time to take the window display down and Kevin also gave me the buttons that were in the display. Klutch looked for a book and ended up in a conversation with an employee about the hardcore punk days. I pulled him out of that situation and ended up on an adventure wandering through the store while trying to find Derrick Jensen’s As the World Burns comic book.

I’ve started reading it and must say that fun is not a word Derrick Jensen uses. He speaks the truth, but only the darkest, grimmest truth. Hurts to hear it, and he’s probably right, but if there’s humor in this comic book, I haven’t found it yet. Well, I guess the fact that the aliens who want to eat the planet shit gold and pay the government off with their feces is actually funny. But looking at cute, child-like drawings of little girls saying that the sky is falling is not a message that people will buy into. But it is happening, and Jensen does cut to the chase by blaming greedy people and reminding us that we aren’t really putting out energy on fixing things into the proper channels. Jensen’s main channel that he’d like to see collective energy focused is in ending the current version of civilization. Guess his audience are the folks who want to violently take down governments and corporations. And where the hell are they right now?! Derrick Jensen has some intense shit to tell you!

Klutch and I then rolled over to see his work at the ADIDAS store across from Powell’s. Love his stuff. His new style is dark but well-drawn and crafted. We stood at the front door looking at the display of sad people puking. “I love seeing them puking at the entrance to the ADIDAS store,” Klutch commented. We then went to his studio over on the East side near 12th and Oak. Saw some stencils in this hood, but the most memorable discovery was the skate bowl in the warehouse across the street from his studio. There’s another bowl in another warehouse nearby too. Met his neighbors, cool guys who make t-shirts. Also went by Diesel Fuel and I checked out their cool store while Klutch chatted with the guy there. 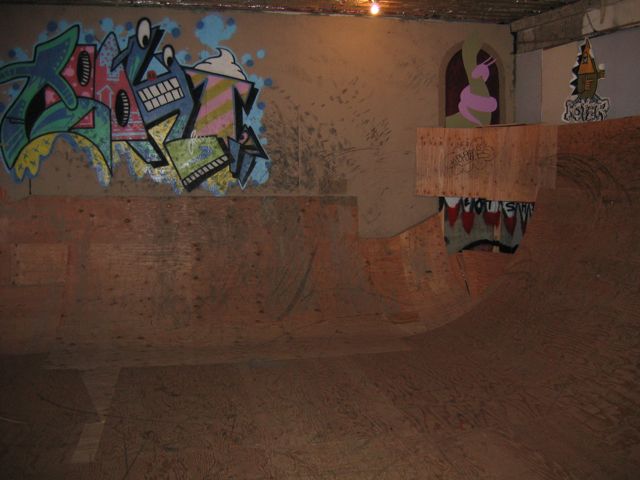 We walked around and checked out the stencil art. Klutch feels like this is the last bastion of ungentrified inner Portland. Thought he took me to a vegan cafe (blasting death metal) that was next to a vegan tattoo parlor in the hood, there was no sign of condos, Starbucks, or expensive food/clothes. Called Creature to meet up with him at his new warehouse space, and then had to postpone a visit with Tiago way up north until Friday. Klutch and I wrote and drew some stickers for a spell before we said goodbye. On the way to see Creature, I passed by the Red and Black Cafe. It’s a coop with an anarchist flag hanging at the entrance. I took a note of its location, hoping to return on Friday. 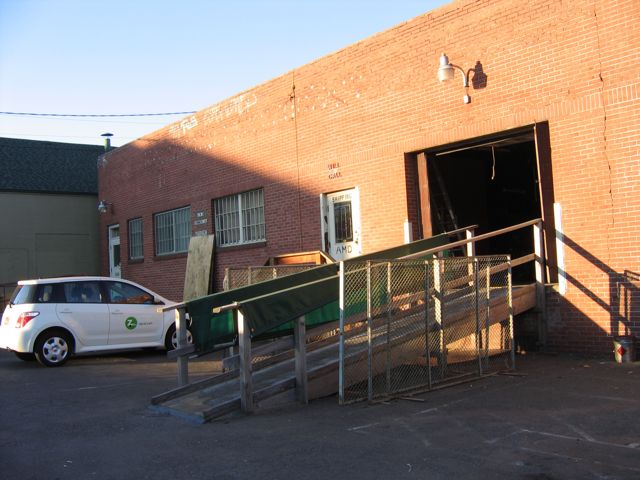 Creature’s new warehouse was just north of Burnside, where Mississippi and another parallel street met just above the industrial wastelands on the riverside. When I rode up on my bike, I saw three entrances. One entrance was open, and people were fencing in that space. Nick came around and then showed me the work in progress.Â  At the far end of the building, demolition was taking place so that a cafe could get set up in that area. The fencing area was where the bar is, and Creature also has warehouse space down where the industrial wastelands are (for storage mostly). 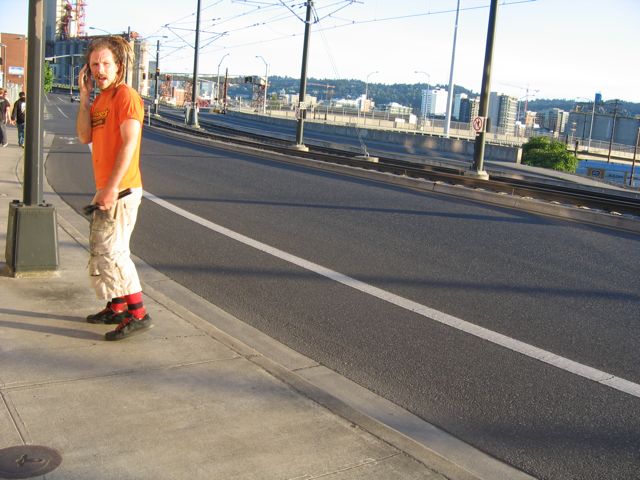 I think Creature is the hardest working man in the circus business. He busts his ass all the time trying to get the arts happening in Portland (last year during my Portland visit, he was trying to get a different warehouse space). We walked around the neighborhood to check things out (found a stencil down there), and he took a call about buying the house he’s living in right now (right off of Mississippi’s happening section and around the corner from a huge six story condo that’s getting built right now).

He had also just walked all of Mississippi with his mother and approached anybody who’d talk to chat about starting a business and being part of the neighborhood. Most of our talk was about his ideas, his plans, his struggles, and his hopes. Much of his hope was based on the fact that the new mayor might actually make Portland a great place for artists to live and make a living. I had heard Klutch mention the new mayor’s potential for supporting the arts. Chris had also heard of the hope of the new administration.

We went to his house to pick up his mom and had dinner at a Thai place on Alberta. The pre-solstice sun has played tricks with me during the trip. I have lost track of time all week, and so last night we showed up to the restaurant around 9 PM, with the sun just setting, for a late dinner. Things seem to close around then in Portland. Back at his place, we said our goodbyes and I biked home at a reasonable hour. Compared to the times prior.

Friday morning, I begin to pack things up for the drive to Seattle. Had breakfast with Chris and Katie, and then went on one last bike ride with Chris. We headed to the Red and Black Cafe, had a tea, and I photographed stencils on their inside wals. We then rode over to 33rd and checked out a few City Repair building projects. Cut over a hill to get back to NE, packed up, said goodbye to Katie and her dog, and then drove to North Portland to have a quick visit with Tiago and Adriane. Got to see Tiago’s yurt studio, look at his original works, and pick up a sexy piece of stencil art from him. Chris and I saw traffic on I-5 so stayed on surface roads as long as possible and avoided the mess for a clean ride North to Olympia, WA.