Drove past Vail yesterday on the way to Copper and marveled at the tall cranes rising out of that outdoors village. There must be some tall condos going up there! Copper is only about 7 miles away from Vail, and has a town named Frisco a few exits down on the Interstate. The first thing we saw driving into our final destination was a man in the river fly fishing. We also saw a van with “Solar Powered Stage” painted on the side of it (two guys who are doing a Tour de Fat tour after the Copper Mtn. gig).

We got our keys before the 5 PM check-in due to having to set up our games. We’d spent all day driving from Grand Junction, slowly going up and up into the Rockies towards Copper Mountain and the resort that’s developed below it. I don’t have much experience with the ski lodge culture, so was shocked to to walk into a full on condo for a room. The guy at the check in, who had “I’m interested in … active walking” on his name tag, told us that the condo owners sometimes make three times their mortgages on renting out their properties in the village. I walked through my very own two bathroom with a porch condo, which I was sharing with Tom for three nights. Jonathan and Veronica got their own room, with a huge king-sized bed. Full kitchens in both places too.

We designated Jonathan and Veronica’s kitchen the community kitchen and made sandwiches for lunch before the build out. We met up with Ray, a well-tanned worker who’s helping with the 3 Ring Weekend production. He guided our van over to our spot, which wasn’t what Jonathan expected (he expected to have room for six easy-ups in a row). We had to do a four and two set up, so decided to put the Eco-Info booth and the GMO Freak Show booth separate from all the games.

Then we spent about six hours setting up the games. They looked great, and I told Jonathan that they have improved every time I’ve seen them set up. I left the crew at 11 PM with no energy left to focus on any more set up. I slept deeply, but my burned knees woke me from time to time (I burned my left knee two days ago passing through the Salt Flats of Utah, and burned the right one on the drive through CO). 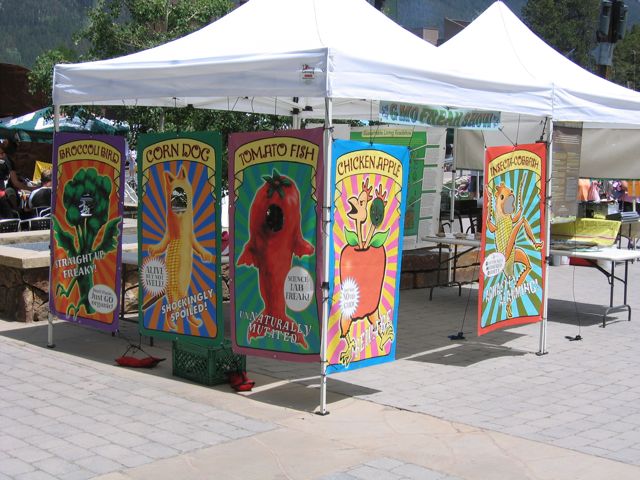 July 5 hit with the champion cereal breakfast. We were all dragging a bit, and I found out that the crew had stayed up until 2 AM doing detail work. Wow. Their dedication constantly inspires me. Out at the games, we took down all the tarp covers, set up the Eco-Info booth along with the GMO Freak Show. Copper Resort then gave us 5 volunteers, working for a free-day lift ticket next winter, who picked up the games and rocked them. After a bit of orientation, and card reading, they opened the games so we could run off to a “Pimp My Ride” bicycle procession.

We have four puppets from Wise Fool in East Bay, and I had the honor of putting them all together during last night’s set up. I love working with the Wise Fool puppets. They’re so easy to assemble, with simple, obvious ways to tie things together or assemble by sliding paper mache parts onto pieces of wood. Saturday morning, I worked out the procession route and staging with the women running the bicycle enhancement station (aka Pimp My Ride). I then took the puppets over to their booth while the rest of the crew assembled the midway.

So off to the puppet gig at 10:40 AM. Jonathan and I put Tom into the Fool puppet, which has a pair of pants to put on to tie to the backpack part of the puppet. Veronica was Moon, and looked lovely in white. I wore Summer, who has leaves for hands, and Jonathan was Star. We circled up as puppets and had a nice moment touching puppets hands together. Then the ride started, snaking us past the climbing tower (with waterfall) and out to the fire truck by the stage area (and the “American Eagle” Chairlift). We danced around and then went back to the games.

Recycle Swish was the new game and immensely popular. “Who doesn’t like to throw things?” a parent commented at one point. When RS started, you could hear the cans and plastic flying. Clanging noises became a constant sound, and I saw people dodging stray shots at times. I volunteered on the game but let the volunteer work it. He was great, telling the players that “there isn’t any trash for you to throw away. It’s all recycling.” I played it once and had a great time trying to get huge plastic bottles through the hoop and into the plastic recycling bin. Some of the paper was hard. One boy, maybe about six, did great. His father and I had a look, and I said “he’s really good at that!” 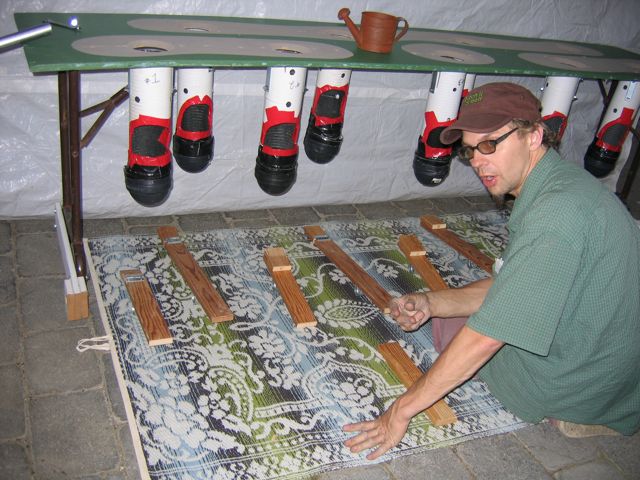 I spent most of the day barking to get bodies at the games and at the GMO Freak Show. I worked Toss Out Fossil Fuels some, and did the updated version of Seeds For Life. Tom and Jonathan devised a lever system that shoots flowers up out of the seed bed via a foot press. Volunteers were watering the seed and then using a fake sunflower petalÂ  to give it sunshine. The game looked great. The new Freak Show banners looked great too. I enjoyed giving folks a hard time if they stuck their heads in one. “Look at that Corndog. Don’t want to eat that GMO thing! But she has a cute smile.” etc.

The weather took a turn for the worse around 5 PM. A decent Colorado thunder storm rolled in and most of the local volunteers said it’d pass. Before it did, it hailed on us a bit, and caused us to rush around taking banners off and waterproofing the games. After an hour of tarping up the sides, we decided to call it a day at 6 PM. It kept raining during the concerts. I hung out for Rusted Root, and managed to have a local beer. Chilled at the TV for a bit before heading down to the community kitchen for a dinner. Jonathan cooked up some veggies and baked chocolate chip cookies.

We took the cookies and rice milk down to our place to watch the 10:55 PM fireworks. The the MC today said that it’d last 5 minutes and he was right. Not much of a show, but fun to have front row seats from our porch. Looking over the small pond, I sang a horrible version of the “Star Spangled Banner” while the show happened. On the porch, we heard the beats down on the solar stage. DJ Ivy was dropping the funk, so we wandered down there and mustered the energy to dance for the last 15 minutes of the set. People came up to us afterwords and told us they enjoyed our grooves.

So, after a walk over to the river, we headed back to sit by the games and the ideas began to flow. Then back to the Condo Compound for much needed rest. Not such a long day tomorrow, but we do need to break down and put the games back inside the van. Veronica took photos of the build out, so that should help us see how the thing got packed the first time.