Don’t know how long I’ll be able to type tonight. There’s no electricity in the “Gypsy Wagon” I’m sleeping in tonight at Strawberry Hot Springs, CO. Jonathan and SLR are taking sustainability seriously, so for only a small extra amount of money, we’re spending the night under the stars. We showed up around 6 PM today and got a two hour soak in before making a great meal. Then we soaked again around midnight tonight. 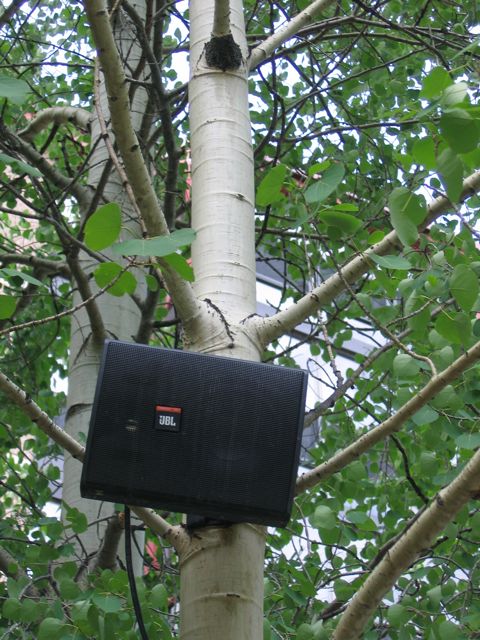 Last shot of Copper Village, where the PA system plays cheesy 80s music, even from the trees!

Props to Halsey for mentioning this place on the day I was leaving. He’ll be here next week when he visits Colorado. Jonathan stopped here when he moved to SF about 14 years ago. And Mark said that “we wouldn’t want to leave” once we got here. He was right!

Today was our day off after about five days of driving hard, setting up the games, working the games, and breaking them down. We got up early Sunday to do a final five hour shift with the games and began under rainy skies and very low turnout for the kid’s day. It was chill and we all found ourselves not having any ped traffic to bark to. After the concert, we had a great rush of families at the games, and that was it.

Over all we had amazing volunteers working with us. Sunday’s crew had a good time participating with us. I got to give the volunteer orientation and had a good time empowering them to make stuff up for the games (I gave them the framework to go off of), talk amongst themselves to pick the games they want, and make up their own carny bits. We realized tonight at the Springs that we’re allowing people to join the circus for a day. What a deep dream and desire to tap into for the general public, which showed this weekend.

Our day off began last night after we broke down the games. The volunteers stayed on, even when it rained, and helped us put the games and puppets back into the van. They were shocked that it all fit in our van. Today, I complimented Jonathan for making the games better, and finding a way to fit more of them into a smaller vehicle (he’s gone from a bus to a step van to a van in four years time). After a walk around the creek that runs through Copper, we were ready for a soak.

Jonathan wanted a nice tub with a good view so he called the front desk to ask them about it. Clint at reception told us that the tub in our building was the one to use. We hurried down to hit it before the 10 PM close and found a “Closed” sign on the door. Our keys still got us in and we found the tub drained for repairs. Undaunted, Jonathan called Clint up and told him that we’d worked hard and needed a soak before hitting the road again.

Clint didn’t know what to do, and then Jonathan used his amazing powers of persuasion on the poor guy. “If there was a time for a management moment, this would be it!” he told Clint as we all busted out laughing at Jonathan’s amazing one-liner talent. Clint actually did have an idea. There’s a hot tub at a different building that had a nice view. He could give us a parking pass for it and we could stay there until midnight at least. 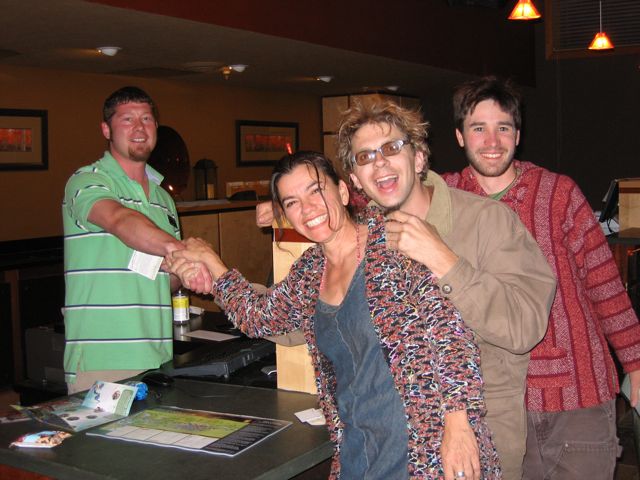 The Eco-Carnies of the SLR present the “keys to the Conscious Carnival” to our hot tub master, Clint

Hot dog! We hopped in the van and drove over to reception to find Clint alone at the front desk. We gave him the “keys to the Conscious Carnival” which was all the game cards, a brochure, a reusable grocery bag, and a “cookie” (a Clif bar). Jonathan showed Clint the “infinite handshake” which really blew the guy away.

We were wasting hot tub time so drove way over to the edge of Copper and found an outside tub with no way to get in to the building. So we changed out on the deck and hopped in. Shortly after we began to soak, anÂ  older man stood about 20 feet away from us and talked our ears off. He never came close and barely let us have a discussion with him. I wanted to relax during the soak but he kept praising the USA and the military. Over and over. From many different angles. And we couldn’t respond or discuss anything. Ugh! 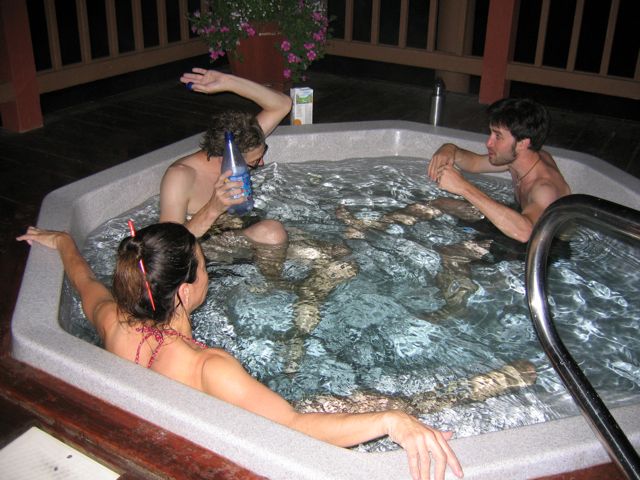 Soaking at the hot tub by one of the oldest buildings in Copper. Jon and Tom are brainstorming (again)

We did get some alone time, but Jonathan and Tom are cut from the same mold. They started discussing the Carnival Games in the tub, so my only escape was to get out. Which I did. After four hard days of hard work, any time in a hot tub is good for the body.

Monday morning we packed up our personal effects, left the condos, and then got free lift tickets to go up two-thirds of Copper Mountain. We took the chairlift up and had amazing views the whole way. I found a trail which we went up into the woods and it led us to a bowl of boulders. From the boulders, we saw a grey fox walk out of a wooded area. He then headed up the edge of the boulders and disappeared. A gopher stood on a rock near us and chirped about every 30 seconds when the fox appeared. Tom got near her nest and she almost attacked him. My amazing animal interactions continue.

We ended up using a rain jacket to sled down a small piece of snow before heading back down to hop in the van and leave. The drive to Steamboat Springs was amazing. Every time we looked out the window we saw heart-stopping views. We drove in and out of rain, saw rain falling miles away, and even got hailed on for about half a minute. Colorado has an infinite amount of majestic, breath-taking views. We ooh’d and ahhh’d the whole drive north towards Strawberry Hot Springs.

We got into Steamboat Springs around 5 PM, and bought food at a local health food store on the edge of town. We also visited the Light Cowboy Store (“Since 1905” the dozens of tiny billboards say on the road into town) and walked around the corner from there to catch up quickly on some computer zombie time. Mark called and had just heard about a pay-what-you-can restaurant in Denver called “So We All Can Eat.” Jonathan made calls to Denver to try to maybe meet people there tomorrow. We’d all just found out that the last day of the DNC in Denver would be at Mile High Stadium, which doesn’t matter for the SLR gig then. We’ll be packed up and on the road to St. Paul by then.

And then we had one more short, beautiful drive where a river and hot springs meet. Strawberry Springs has been a magical place for us. Spending the night in actual vardos (Romani for wagon), under a huge sky, with a series of areas allowing for soaking in all temperatures, and being able to sleep deeply in the woods for a night is definitely a sustainable way to end a day off.

Now my battery will die for the night and I’ll have to find a plug somewhere soon to recharge it. Off to sleep anyways, so that I can dream of wanderings I’ll only be able to take while asleep.