As my final days in Concord begin to speed up, my gut tells me to call and check in with Linda Elbow at Bread & Puppet. Then, after the high striker breaks a spring in Keene two days before I leave the state, I have to trouble-shoot a way to mail the replacement. So I call Linda to get the OK to next day a spring to Glover if I have to.

She says that that’s fine, and also tells me that Bread & Puppet will perform in a parade in Irasburg, VT Saturday at 6PM. I have planned on leaving my Portsmouth gig at 2:30 to arrive at Glover by 6. Linda says to make it 5:30 and I’ll get to go to the parade. I make sure that I leave Portsmouth with enough time to get up there by 5:30. 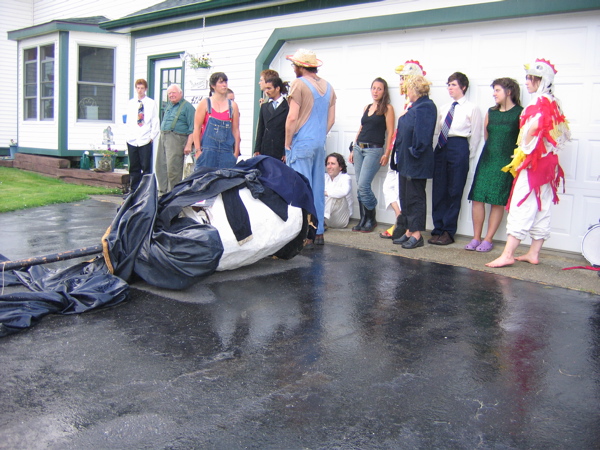 The drive through the White Mountains makes me realize that I really hadn’t seen much of New Hampshire’s natural wonders. If I get this gig next year, I’ll have to make time to hike the hills that I’d just enjoyed from the van. My energy then changes once I cross the boarder into Vermont. Not sure what makes the difference, but seeing those dramatic panoramas full of farms, rolling hills, and the cloud-strewn blue sky holds a different place in my heart and mind.

After pushing 75 the whole drive, I pull into Bread & Puppet right on time. I find Linda as the troupe arrives at the house after rehearsing in the field, and we meet, discuss logistics briefly, and go to the house to have a snack. I instantly meet at least seven people from around the world, some of which know that the “carny guy” will be a Ding Dong tomorrow. One performer introduces me to Sam, saying that she has always wanted to be Vanna White. Tomorrow will be her first chance, so Sam excitedly tells me that she wants to be part of the act. After agreement on a two-person bit for the games, she tells me that the parade performance will protest the USDA’s animal-tagging requirement. I don’t know anything about the issue but will protest it no problem.

I tell Sam about the broken spring, so, after becoming concerned, she takes me into the workshop to meet the Bread & Puppet master craftsman. He briefly hears my problem and says to use what I need to fix it. I spy a vice and pliers, so think that that will fix the spring. I then go to the kitchen and get a snack of fresh-cooked bread, baked here on the property, with homemade jam and peanut butter. We all load up onto a van and a bus, heading out for the schlep to Irasburg.

On the bus I meet more people. The driver practices Tuvan throat singing while songs spontaneously break out behind me. I end up meeting everyone on the bus and give out seven of my pens, promising more tomorrow. I sit beside a dancer from Ohio who clues me in on the animal tagging. Right now farmers don’t have to tag their animals, but the government hasn’t really promoted that. Instead, the government wants farmers to tag every animal with radio tags, supposedly to monitor mad cow and bird flu outbreaks. Activists see it as another step closer to Big Brother, thus another way to control citizens. Plus, the government doesn’t pay for the tagging, so it will literally put small farmers out of business.

We arrive to the village of Irasburg and start to costume up and get things set for the parade. Linda finds me and checks on me. She would do this throughout the weekend, making me appreciate her thoughtfulness and professionalism. A woman with multicolored hair walks up to me and introduces herself. Leslie wants to know what I’m going to do in the parade.

“Well, my ankles hurt tonight so I don’t want to carry the heavy pole that holds the butcher puppet’s right hand. Would you mind standing in for me?”

“You put a suit on. They’re over there in that bag. There’s a can attached to rope in the hand. Put that on. Grab a butcher’s mask. I think there are some in the van. Put that on and clap with the left hand right after the drum roll.”

Thinking that I will wear her suit, I hold my arms out to see if it’ll fit. Before I ask her to do the same, Leslie belly-bumps me. Laughing, she then goes over to help me sort out the costume. The suit pieces I choose fit reasonably well and aren’t too sweaty. I find a mask and start helping to assemble the large butcher puppet and it begins to rain. Bad news for paper mache art! 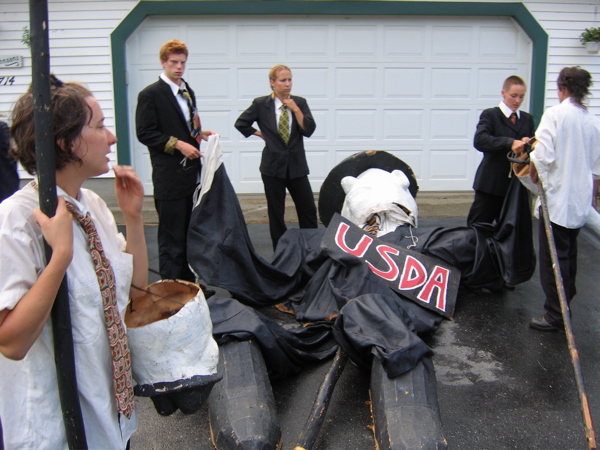 The rain passes and most of the troupe is ready to march. The band mostly wears green and the stilt walkers are all colors. A group becomes chickens as two puppeteers jump into a cow puppet. Another pair assemble a pink elephant. Another performer dresses up like a farmer, wearing a farmer’s mask while a group of women put on washing women costumes and masks. The experienced performers have trouble assembling the large butcher puppet. Our cue to march has arrived in a string of fire trucks so Peter Schumann tells us to hurry. 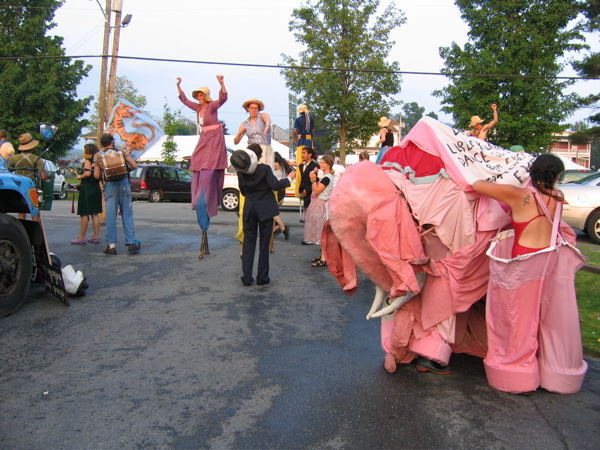 At the last moment, we raise the butcher puppet. The last hand gets attached to the suit sleeve and the thick body pole goes in to the wheeled base (an old piece of farm equipment). I realize that I don’t know my clapping cue!

“I understand that I have to clap,” I announce.

A drummer in a butcher costume says “I play a drum roll after a whistle blows. Both hands clap at the end of the roll, with a cymbal crash.”

The performer of the left hand hasn’t done this before either so we encourage each other before putting our masks on. As the last fire truck drives by, Bread & Puppet flows into the parade. Peeking at the scene through my mask, I realize that I have fallen in to sudden theater with Bread & Puppet!

The parade route goes around the town square. At each corner the band stops playing, and my cues arrive. A whistle blows, a drum rolls, and I clap as the cymbals crash. Then the animals fall on the ground and yell “Refuse to register your animals!” The butchers then run back to the large butcher puppet, labeled with a USDA sign. No matter what happens with the cues, I thoroughly enjoy being part of the parade. 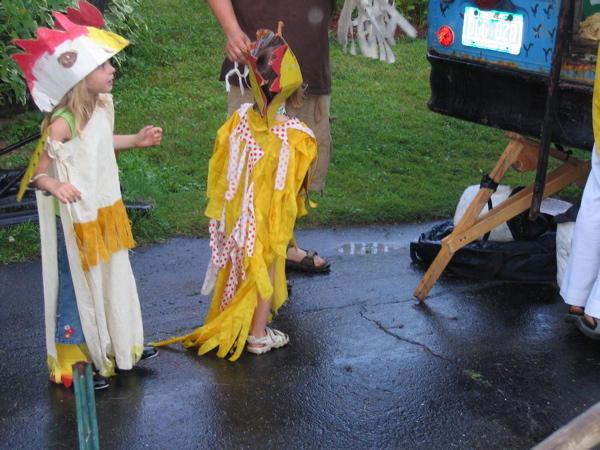 I carry the puppet’s right hand with a small tree for a pole. The tree most likely fell naturally on the Bread & Puppet’s property. I check the main puppets position and movement by looking through the mouth of my butcher mask. I watch the farmer character do excellent mime and mask movements. I see a man in a grass skirt waving a tiger banner. “Who the hell is that?” I wonder since I didn’t see him before we stepped into the parade.

The parade winds back to the bus, so I instantly peel out of my sweaty suit and step away as the pros strike the puppet. Beers get handed out at the bus’ entrance, so I take out my Swiss Army knife and open caps for everyone. The man in the grass skirt is Peter Schumann, and over beers, Linda makes a point to reintroduce Peter and me. I also meet about five more people, one of which is a sculptor who plays a tin can violin in the circus.

Back at the farm, the dinner bell rings. We eat fresh-picked salad and bean chili with rice. Groups head out to swim at a lake, but I stay to work on fixing my spring. I pick up tomorrow’s schedule from several people: 7:15AM yoga, 8:30 breakfast (granola, oat meal, and bread), 9:00 meeting. One person adds that “singing is always part of the Sunday meeting.” I also find out that a puppet crew will perform after the main show and a neighbor might play a Bread & Puppet documentary. Not feeling any reason to start the drive to Iowa, I decide to stay Sunday night too.