I first met Kevin White about 12 years ago in Atlanta, GA. At the time, Kevin toured the Southeast performing marionette shows with his brother Brian. They worked for a company named Vagabond and had a boss that mismanaged the business. I moved away from Atlanta a few years after meeting them and they had both quit working for that company due to the fact that their boss didn’t run things too well. 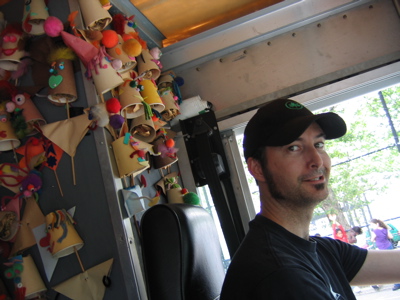 Kevin White behind the wheel of Puppet in the Park’s Puppet Mobile, NYC.

I lost touch with Kevin and found my own path to puppetry after moving to San Francisco in 1997. As I became an active member of the CELLspace Puppet Cluster (David Morely, Jonathan Youtt, and Joelle LaPlume were the main members, with Whitney Combs, Sam Bower, myself, and others as supporting cast) in 1999, I thought of Kevin often and wondered why I never felt drawn to puppetry in Atlanta.

On top of hearing his stories about working for a horrible company back then, I was untrained and uncertain about what I wanted to do with my life. TV and mass media still influenced me, and the American Dream was just beginning to fade from my list of things to do. While living in Atlanta, being a puppeteer just didn’t make sense, but after combining the art-form with politics, and meeting many performers who encouraged inexperienced people to play, puppetry instantly hooked me.

Four years ago, Kevin White made a brief appearance in my life. Oddly enough, my South Carolina friend, Russell Bryant, had just taken a puppetry job in NYC. He played school shows for the NYC Parks Department, and Kevin led the crew. After Russell mentioned me several times in conversation with his coworkers, Kevin finally asked Russell if he was talking about me. I got a good laugh out of that story when Russell told it to me, and I had a brief phone talk with Kevin during a visit to NYC shortly after their discovery. We lost touch again.

Two years ago, Kevin found me online and invited me to attend his wedding. I couldn’t make it, but our contact stuck this time. While in New Hampshire, I set up a visit with him during my visit to NYC this month. Felt good to see him after all these years and to spend a day with him on the job and above the strings! One of the main reasons for my visit was to go to a gig with him and see how his shows run, so my first day in New York was a work day with Kevin. 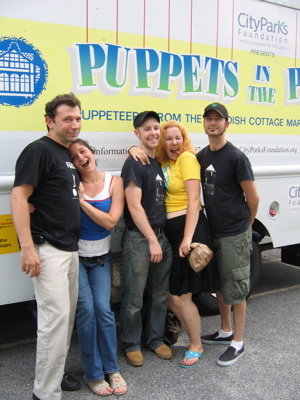 Kevin (far right) and his Puppets in the Parks crew (l-r): Alex, Candice, Liam, and Cinna

When I first spoke with him about five years ago, Kevin was a Puppeteer for the Parks Department. After a round of lay-offs, that title disappeared and he became a Recreational Specialist. He’s basically the man that runs the road crew (there’s a whole other puppeteer crew that performs at The Cottage, aka The Swedish Cottage), which currently consists of four other people. Cinna is the only other NYC Parks employee and holds the title of Playground Associate. Liam, Alex, and Candice work for the City Parks Foundation, the 501c3 that produced the show and supports the program via grants. They don’t get the perks that Kevin and Cinna have, but seemed happy enough to have their jobs.

Our day starts at 7:30 AM. Fortunately, today’s show starts at 11:30, so no 6:00 AM morning for me. A few blocks from Kevin’s Williamsburg apartment, he realizes that he left his cellphone. I offer mine, but he doesn’t have his crew’s numbers memorized so doesn’t need it. As we walk to the meeting place, a park near the BQE (Brooklyn Queens Expressway), we look for pastries and good coffee. We run into Cinna, with her own coffee and pastry, find our own breakfast, and go to the park to wait for Liam to pick us up.

Cars inch slowly above us on the BQE, so Kevin begins to get antsy as Liam’s arrival grows later and later. Not having a cellphone doesn’t make things better, but Liam shows up soon enough. We climb into his old, rusted Parks Dept. SUV and drive to Randall’s Island to pick up the Puppet Mobile and the rest of the crew.

Randall’s houses the Parks Dept. and many other NYC departments. I see a warehouse full of NYPD cars as well as lots of construction equipment. Liam drives us over to the aptly named Puppet Mobile. It is a UPS-type auto with sliding doors and a small seat set behind the two main seats. I hop into that “rumble” seat while staring at all the paper-cup puppets that are attached to the cab’s interior. I find out later that their crafting portion of their gig entails the construction of the same paper-cup puppets. Cinna rides shotgun, checking maps and the schedule, and making phone calls. Kevin drives the rig, comfortable behind its wheels in the NYC traffic. The rest of the crew rides with Liam in the SUV.

A short drive lands us in the South Bronx where the show will be performed in a small park by a junky, barb-wired auto lot. Kevin pulls the truck into a basketball court that sits next to a discovery garden. After backing into a corner of the court, the crew sets up the stage.

Kevin broke his arm in a bicycle accident about six weeks ago, so he has Candice on board as an extra crew member. Kevin decides to perform today, so I’m glad that I’ll get to see him pulling strings. He helps with the unloading as the rest of the crew sets up the stage in about 15 minutes. Their stage consists of three pieces with the SR and SL flats bolted into two of the three risers. The platform is basically scaffolding with a 4-step ladder going up it. Surprisingly, no proscenium hides the performers from the audience. During the show’s introduction, Liam tells the kids that they’ll get to see two shows at once: the puppets and the puppeteers.

Most of the set-up involves unwinding and hanging the marionettes. They have about two dozen puppets whose strings measure five feet in length. Master builder Adis Williams designed and crafted the puppets and, though not articulated in detail, they look well-made. Showing skill and care, all the puppets were properly stored with wound up strings in their own bags.

The City Parks Foundation spent $50,000 producing the Parks Department’s current show. They get most of this funding via grants from organizations like The Jim Henson Foundation. The 50-minute performance tells Hans Christian Anderson’s “Princess and the Pea,” “The Emperor’s New Clothes,” and “The Ugly Duckling,” respectively set in Africa, China, and NYC. The puppet choreography works off of a well-produced CD played on a PA system plugged into the Puppet Mobile’s generator. I wonder if most of the money went into making the soundtrack, and ask Kevin if Parks would ever consider solar panel-run PA systems and a bio-deisel Puppet Mobile. He doubts it.

The three elementary school classes show up and Liam introduces the show. A rod puppet owl, living above the SL flat, narrates between the stories and gets the kids to use their arms and flap the stories forward. Voice-over talent varies due to the fact that some of the voices were Parks employees. Kevin premieres his VO talents, after years of asking for a part, in this show as the NYC zoo penguin who befriends the ugly duckling. The songs are pretty cheesy, but I’m not the intended audience.

The performers put on a well-done show. Kevin, Cinna, and Liam have the cues down, adding details to the character manipulation that can only come from experienced players. Alex, the greenest performer with a year total puppeteering under his belt, did well too, but his inexperience shows via those missing details. Kevin’s skill stands out, mostly through his extra attention to creating puppet nuances and by creating an extra layer of delicate movement on top of what the other experienced performers have done.

I enjoy seeing the “dance” up on the platform as the puppets perform below. Pass-throughs always excite me, as well as the times when a puppeteer has to hold a second marionette while the other puppeteer has to “dance” elsewhere. Kevin tells me that his crew only had two weeks to rehearse the show, so the movement got worked out in the early part of this show’s two year run. Other movements consist of velcroing the backdrop, sometimes taking it off and then putting it back on for a scene change. Most of the props enter and exit via a push from a hooked dowel, a smart tool to use instead of a hand.

The kids enjoy the show. They don’t pay much attention, but always answer when a puppet interacts with them. After the show, one of the classes stays to make their own paper-cup puppets with Cinna and Liam. The rest of us break down the show; striking the marionettes takes up most of the time.

One rarely hears about puppeteers making a living with a government-funded job, but Kevin White does it. Even though his managers come from parks facilitation jobs where they don’t understand the skills and needs that go into a puppet show, Kevin has maintained a quality crew that puts on a good show. As he continues to battle city bureaucracy for more creative opportunities and room to grow in his position, the children in the NYC public school system will leave the shows with memories of puppets in the park. For some of these children, this may be one of the only live performances they’ll ever see. While most jobs have painful moments, at least Kevin does what he loves and does it in one of the most creative cities in the world. And, at least after the performance I saw, Kevin exits the stage to applause and screaming.

One Reply to “Pulling Strings in NYC with Kevin White”