Early in Rev. Billy’s Church of Stop Shopping’s service/performance, an elderly man gets up out of his front-row seat and is escorted down the aisle of St. Marks Church. “That looks like Mark Twain,” I think, observing this gentlemen’s crazy hair, bushy mustache, and seersucker suit. “Wait. That’s Kurt Vonnegut!” Rev. Billy sees the man leave and confirms my thought, saying “bless you Brother Kurt” into his mic. 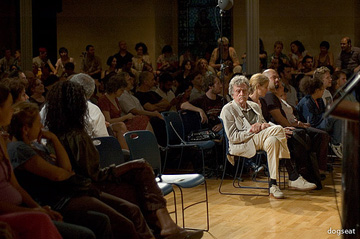 Vonnegut couldn’t stay long enough to give the reading portion of Stop Shopping’s service/performance, so Rev. Billy reads the poem for him. With a four-camera shoot going on, and everyone’s acknowledgment that Vonnegut was old and not well, Rev. Billy reads a somber requiem for the war, it’s dead, and our country’s current state. Sober, respectful, the Rev. takes the poem’s message and calls on his flock to heed the words of our elder brother.

With the consistent message of anti-corporate consumerism, Rev. Billy tells us that now is the time to “back away” from corporate chain stores. He then introduces two local business owners in the Lower East Side, and mentions the fight to keep Wal*Mart out of the Bronx. Finally, in his “sermon,” he brings things home with a story about walking away from Kinko’s and finding a small card shop that gives him a transcendent moment at it’s counter. A shared gift happens instead of a fake smile and a no-name profiteer.

The next day, stencil-hunting on the Brooklyn shores of the East River, Rev. Billy’s message, more so the feelings of sadness, loss, and grief that Vonnegut’s poem created, sinks in in a different way. For the first time ever, my camera’s disc maxes out of memory. As I walk around a ripped up Kent Avenue, zigzagging past small businesses, family dwellings, funky art spaces, and vacant lots, I realize that my feeling of melancholy derives from connecting a few conversations I’d had over my stay in “Billyburg.”

On one walk, my friend Kevin, a puppeteer, points to two 20 story buildings that are under construction right off of Bedford Street. “What the hell?” I ask, since they dwarf all the buildings around them. “They don’t fit in.” Kevin tells me that the reason for this is because Williamsburg and Green Point have been rezoned, so high-rise apartments are being built. With affordable housing I ask? Kevin thinks that the two buildings we’re looking at will have about 30% and be mixed-income.

The next day, while visiting my friend Heather’s gallery space 31 Grand, she brings up the fact that her neighborhood is about to become a swath of high rise developments. Being right on the East River, with amazing views of Manhattan, the derelict docks will teem with commuting couples, professional singles, and the rest of the neighborhood will deal with the upped rents, extra traffic, and extra population. When asked about her relationship with her landlord, she said that he was a doll, an artist, and a friend. As we watched Spiderman III set up for a shot down a road by the river, I silently wished her luck.

The gentrification of Brooklyn has been going on for a while now. My first visit to Brooklyn in the early 1990s didn’t even include going to Bedford Street. Seven years later, I ate a breakfast at a cafe there and don’t remember much else that was deemed “cool” or “hip”. Then, in the late 1990s, the neighborhood changed forever. Along with the rest of the US’s larger cities, the desire for living in mixed-use urban settings boomed for those who could afford the expensive lofts and condos. For Williamsburg and Green Point, a long-neglected river-front turned into huge piles of future dollars for the developers that could build there. So a process of rezoning those areas happened, and the era of high-rise living has landed just off the Williamsburg Bridge.

The rezoning was met with resistance from community groups and activist organizations. From chasidic Jews who fear that rising rents will push their tight communities apart, to organizations like the North Brooklyn Alliance’s diverse coalition, citizens have tried to work on their neighborhood’s gentrification issues.

But as most of us know from our own battles in San Francisco, money talks. Some concessions will be made, and some Brooklyn business owners and house owners will stay (or leave), but the industrial period is over for Billyburg. 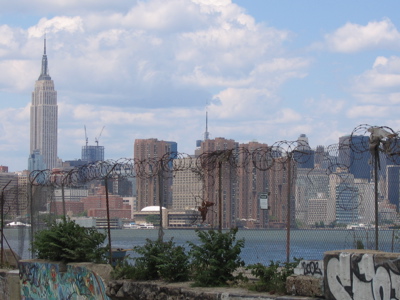 Before my camera’s memory filled up, I walk to the water’s edge and marvel at the amazing Manhattan skyline. I feel comfortable standing on a trashed street surrounded by rotting warehouses, junk-filled lots, and graffiti. As I snap a few photos for my mast head, I turn around and look at Williamsburg. I see wood-shops, art spaces, homes, machine shops, warehouses, a rock quarry, art galleries, and other slices of diversity that makes larger cities so appealing to live in.

The next time I come back to New York City, I will most likely not get to stand in the same place and appreciate the environment. It will become a construction site that will then become a high-rise, that will only be accessible to people who possess the code to get into the building. They will own the views I saw for free, so I sing a requiem to the time where anyone could stand by the river and share the world. Melancholy or not, rolling with these changes will prove to be a ride full of “backing away” from the monoculture that Brother Kurt sharply warns us about in his own hymn for our dying times.