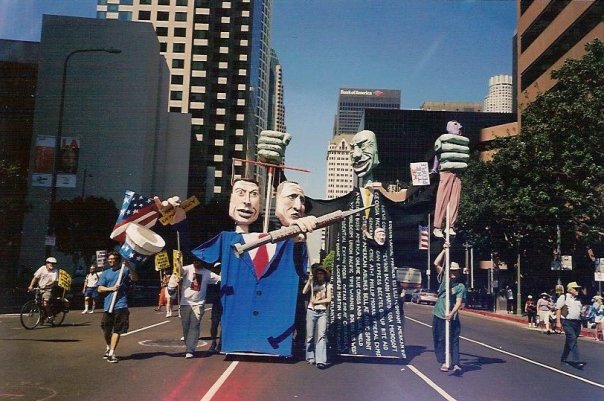 Cruise a Web site that has news on it and I bet you’ll see about two dozen headlines blasting last minute news about the Presidential Election. After 21 months (keep hearing these two words in reference to the USA’s vetting of Obama) of absolute craziness, this country will elect a new president. Well, we’re already electing him since thousands of voters are already voting all across the country. Here in Bush Country, GOP Land, USA (aka South Carolina) I’m [not] overwhelmed with the media-eating frenzy.

Sure I click through the stories and read the headlines, but not many people here in SC are happy about what’s happening. The local paper here in Greenville just endorsed McCain. Though most people here know that the Greenville News is an out-of-state owned paper that sucks covering local stories, the joke’s on them. But the other two big papers in SC, Columbia’s State and Charleston’s News and Courier both endorsed the esteemed senator from Arizona too. Not surprising here, and not really that significant since no one really reads the papers anymore.

People I’ve spoken to this month get their news from TV, with a bit of Web thrown in. So Fox News rules supreme here in GOP Land. This means that the local Republicans aren’t happy with what they see over in North Carolina and across the country. While talking to one very upset GOP member, the words Communist and terrorist came up, referring to Obama and his four years in office. Hate was used a lot too. A friend of mine had to tell a relative that “Obama isn’t going to kill the first born children if he gets elected.” His relative knew the difference between abortion and first born, and admitted that someone told her this. Still another young person saw a sticker on a car and gleefully shouted out “oh, look. It’s a white person for Obama!” without realizing the underlying perceptions of what she had said.

Speaking of those white people for Obama, spin here now says that Joe Six Pack will go to the booth next Tuesday all hot for Obama and then change his mind when he realizes that he’s helping to elect a black man to office. There’s very little spin on those black people for Obama here in SC. One person running as a Democrat for a state house seat in the Low Country knows that he’s probably going to win because his district is overwhelmingly black in skin color. There will be a large number of folks down there voting for Obama, so I told him he picked a good year to run for office.

And you keep hearing about how Obama’s campaign has registered tons of new voters across the USA. Here in SC, there are no registration drives. I’m sure somebody out there is trying to register voters, but why spend the money in GOP Land? Since McCain is a shoe in here, most of the focus is on SC state campaigns. But I wonder how slim of a margin McCain will win by now that the GOP has fallen into what I see as a historic political self destruction.

When Bush first got elected, folks back here in SC said “good riddance to that unmoral Clinton.” The GOP actually impeached the guy over a blow job (if you’ve forgotten your 20th century history) and elected a True Believer. South Carolina ate this up, but turns out that the GOP had many skeletons in their closets, and the scandals have piled up into a mighty hill of bones. So no one’s happy about anything here in GOP Land.

So the frenzy isn’t happening here in South Carolina. Forty miles away in Western North Carolina, people from all over the country are organizing for Obama. I know that folks in California, which usually votes Democrat, go to the neighboring swing states to knock on doors and make calls for the Dems. When a friend told me that she’d probably be in Nevada November 1, I considered spending some time in NC helping out this month.Â  But I do not have my own personal election frenzy and still choose to just vote.

Why? Look at the lists of donors who throw the big bucks at BOTH candidates, and you’ll see who’s really running things. Three elections ago my friends David Morley and K Ruby made a fantastic, symbolic puppet. It was actually about four puppets in one, but the the lesson learned was plainly clear. A huge, grey-faced, mean looking puppet with corporations for pin-stripes loomed over the rest of the players. This evil puppet worked a two-headed puppet with his right hand. That two-headed demon was Bush and Gore, symbols of the so-called two-party system that’s got everyone so worked up over. The overlord squeezed a person with his left hand. That’d be you and me and everyone else who tries to break free from this horror show. The two-headed puppet is throwing a sign that says “democracy” into a red, white, and blue toilet.

David and Ruby made this puppet in 2000 and called it “Corporate Democracy.” Alex Jones, a Texas radio host who can wax paranoid at times, recently described the two-party system as a simple splitting of an actual one-party system into a pyramid-shaped structure. This makes a strong base for the top 1%-3% of the richest families in the country to live fat and go unnoticed. Why do they not get noticed? Because of the media frenzies that get whipped up when elections come around, making us think that we have an actual choice in the matter.

But some kind of wrench has been thrown into this election. Straight out of an Ayn Rand novel, the economy has gone to hell. Wasn’t the Dow up to almost 15,000 earlier this year? Now it’s barely 8,000 (and has manically hit 9,000)! Did Alan Greenspan concede a mistake, saying that the banks did not take their own interests to heart when this whole greedy machine got wound up so tight it threw a rod? Now articles are starting to appear saying that Obama will be the most powerful president in the history of the country. Wait, wasn’t Cheney the most powerful president?

If this election seemed historical 21 months ago, it is probably the MOST HISTORICAL election in the history of the USA now. But will it make a difference? Will a Democratic-held Congress and White House make a damn bit of difference? Sure the Supreme Court will get new blood, but will this “change” everyone keeps talking about really happen. Or will that two-party system just give a little swing to the left so that the banks in China and Saudi Arabia can keep covering the USA’s sorry, in-debt ass?

Sure, I’ll vote. Who won’t this time around? But I’ve never voted knowing that the person I’m electing has my own personal interest in mind. I’ve voted knowing that I am 100% free to walk to that booth and make a decision all on my own. And the frenzy will die down. News will go back to covering the latest media distraction. I guess Americans will keep consuming. And folks will still keep up with NCAA and NASCAR, etc etc etc.

Things seem to be swinging for Obama, so I’ll be interested to see if he really wants to fix things. For now, I still think that Corporations trump the Government when it comes down to it. And they aren’t going anywhere unless the people opt out of their earth-eating schemes. Until then, like the puppet, We The People will feel the squeeze from the invisible hand(s) of capital.

But here in GOP Land, that realization seems distant. No one’s feeling the economic crunch from what I can tell. But they’re all worried as hell about the future. And that election frenzy seems far away too. The smell of blood is replaced with the smell of loss here in South Carolina. The folks here cringe at the thought of Obama in office. They’re buying guns and packing the pantries I guess. For the GOP here in SC, the next four years are going to be a horror show.

So pass the popcorn and click the mute button. Who needs sound when I can hear the sky falling here waaay outside the Left Coast Bubble?