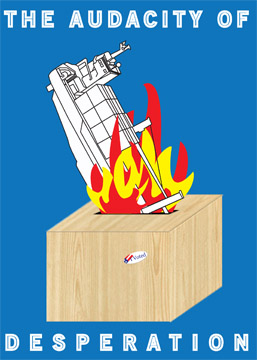 Once again, I have submitted art to the Audacity of Desperation exhibit. This version of the show (the first exhibit was in IL) will open in LA just in time for the historical election.Â  As things have gotten tough all over, Americans seem to be getting a clue that no one in government, corporations, and banks has a real interest in the common person’s plight. Over the past decade, I have met amazing people who do not rely on leaders, government, and Big Business to help them, and try their best, outside of those mainstream channels, to change the world and make it a better place. This show touches on the distaste these amazing, creative people have with the systems that support profit and unfettered growth over basic needs of the people. I wish that I could have made a second series of my desperation buttons, but my life did not play out in a way that gave me time with the right tools. So I sent a stack of an updated version of my “Crate/Destroy” stickers for the attendees to take home, slap up, and enjoy.

The LA event will have other activities going on as well. You should stop by if you’re in the area in the coming weeks.

Organized by Jessica Lawless and Sarah Ross, more than 40 socially engaged local and international artists address the depressed state of politics, anti-war activism, and the economy accrued by eight years of the current Bush administration. Taking to heart the idea that random acts of kindness are central to social change, each artist has made a work of art in multiple editions visitors to the exhibition can take away. The Audacity of Desperation creates a free exchange of ideas that challenges the culture at large as well as the international art market of which Los Angles has become a central location.

The exhibition includes a series of events addressing the Nov. 4th elections:

Sunday October 26: Exchange Rate: 2008 presents performances in the gallery space.Â  Exchange Rate: 2008 is an international performance exchange organized by artist Elana Mann in response to the US presidential elections and includes artists from Brazil, Denmark, Israel, Mexico, South Korea, Ukraine, and the US among others. 6-8pm

Saturday Nov. 1: Evil Dead 8: the end is near, a Day of the Dead inspired memorial for the final days of the Bush administration. Celebrating the end of one evil while not knowing what is lurking ahead, Evil Dead 8 includes skill sharing, music, dancing, a bookmobile project created by Irina Contreras and Kelly Besser called The Miracle, and guerilla interventions by AK-Ami and her mother Maleeka Kobrah. 8pm

Tuesday November 4: Election returns will be projected in the gallery with several of the participating artists present and Lee Azzarello and Sarah Kanouse “Voices of America” internet radio project will be broadcast. 5pm on

Saturday November 8: FOCUS Group Findings — What Now?
Jeff Foye and Gordon Winiemko, present their findings from focus groups staged this summer as part of Trade and Row’s Campaign Trail project. The duo solicited ideas about ways artists can reclaim their power in the political process. Stay for a dance party following the presentation. 8pm

Sunday November 9:Â  A screening of video works that address the numerous political disasters, violations and obfuscations of the past eight years. Curated by Nancy Popp. 6-8pm

Sunday November 16: “So now what?” or “HOLY FUCK! NOW WHAT?” Whether it is Obama/Biden or McCain/Palin, immediately after the elections we’re still in debt, looking for work, without universal health care, and occupying Iraq. Adam Overton and Nancy Popp facilitate conversation and activities that will lead to concrete actions to make change in our own communities. 2-5pm