Thought I’d post these while I had time and notion: 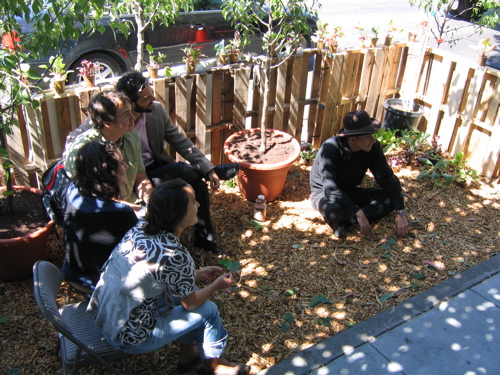 I looked at the PARK(ing) Day’s online map for San Francisco and jotted down some stops along the way to lunch with Laura. First stop: Rainbow Coop and Friends of the Urban Forest’s park. Liked the wood chips instead of sod (overheard DPW folks later that day wondering what to do with the sod) as well as the free veggie plants. I took a chard plant for Laura’s garden. 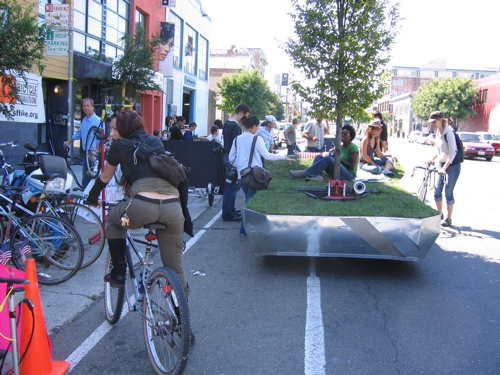 Rolled to Road Rage Bike’s park, and got to catch the REBAR posse on their “parkcycle.” That’s the velodisco art car under the sod, tree, and aluminum siding. Ran into Justin, one of the velodisco’s creators, at City Hall later on, so he told me that a lot had been tweaked. Behind the Parkcycle, the neighboring cosmetology school had massage tables set up. The SF Bike Coalition gave away coffee and cookies, stickers, and buttons. Across the street, One Taste’s park had free chair massages. When the parkcycle drove off, they literally stopped traffic on Folsom St. A delivery truck almost ran over them as they meandered over to the far left lane! 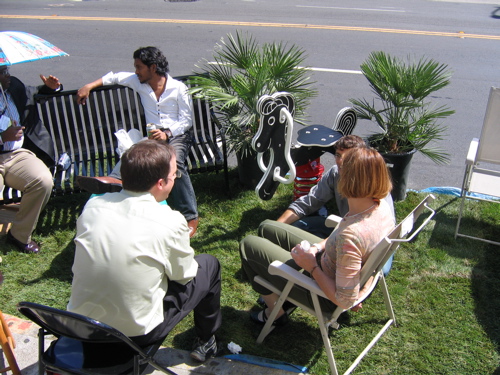 Took a longer break and Planktown’s park. This was outside of Counterpulse, and a neighborhood effort. Chris was there, tabling his wares, and other neighbors where taking the plants in the park and potting them to beautify the sidewalk. This part of Mission St. got the name Planktown because of the natural wetness of the area. Back in the mid-1800s, San Franciscans had to put planks on the street to keep from sinking in natural wetlands mud. 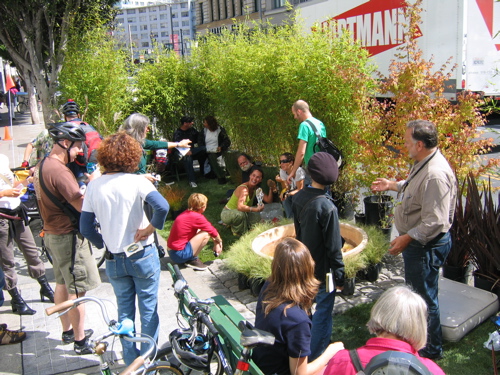 Met up with Laura at the DPW’s bamboo-shaded park. A couple kissed on one bench, while a homeless man wrote poetry on another. The City’s Ecocenter gave away city-made compost across the street, and about three other parks where set up closer to City Hall. This was a great way to create community, legally break the law (a paradox I know, but still true), and bring a bit of green, spontaneity into the world.