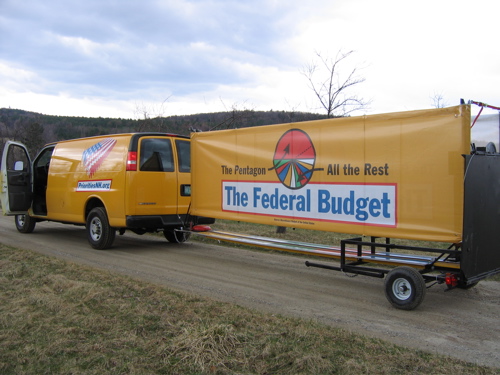 More of a mobile billboard than an art car, this van and high-striker-as-a-trailer will be my new “home” for the next six months. I shot this photo on the road to Ben Cohen’s house (outside of Williston village) yesterday; a farmer in the orchard behind the van gave a wave as I walked into the muddy field to frame this photo. I had just spent about 15 minutes backing this thing down part of Ben’s driveway, and it wasn’t easy.

The CarnyMobile is the latest addition to the Business Leaders for Sensible Priorities grassroots auto-art fleet: the Oreo Mobile (photos soon), the Piggy Banks van (photos soon), the Pie Mobiles, Pants on Fire, Spank Bush/DeLay Mobile, and a few other earlier buses and autos. 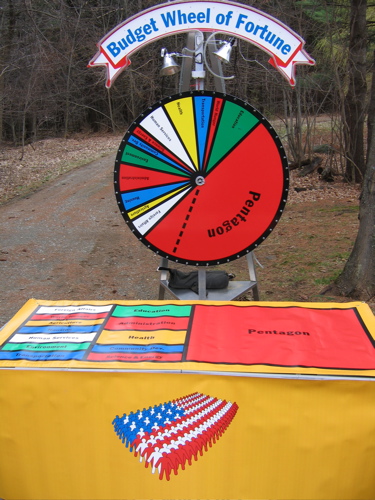 Ah, the Wheel of Fortune. Care to place a bet and see where the wheel will fall? Chances are it’ll land on the Pentagon’s budget (49%!) but you’ll only win a window-shade pen for that bet. Place it on a smaller piece of the budget pie and you may walk away with a stuffed bear. Ben Cohen and I set this up outside his house today during my first hands-on experience with the carny games. 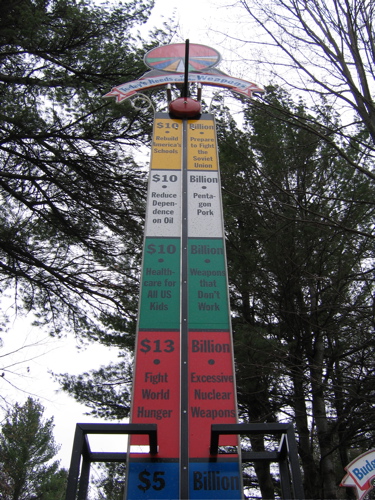 Hard to photograph in it’s 17-foot-tall glory, the high striker is a fun contraption to set up. Ben himself designed and tweaked the rig (along with the Wheel of Fortune), adding on great features like the counterweights, the removable mast pole for the billboards, and the billboard rig itseslf. We had a bit of a time at first because of the small incline that we were setting up on. Hard to turn this mother alone when the trailer wants to roll downhill. 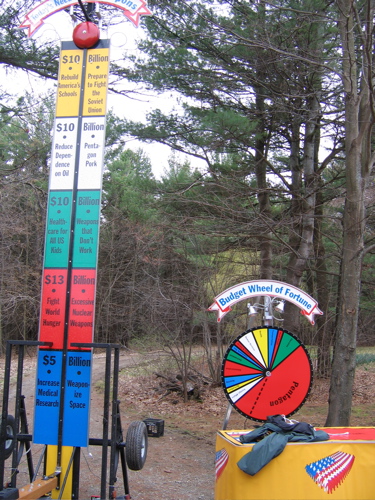 This photo shows what the set-up will basically be for my gigs. I’ll carny between the two games and may have a wireless mic to bark to the audience. The main focus of the games is to educate folks about how the federal budget is sliced. Once they have fun, get a prize (always a pen or sticker, maybe a toy), and ask qustions, then I’ll try to explain to them how we can best use our tax dollars. Hopefully, people will get more involved and let the politicians know that their priorities begin locally in their hometown.