Day three winds down here in Concord, the Granite State’s capital city. I just finished watching another second season episode of ABC’s hit “Lost.” Guess you could say that this is my TV fix, a balm for the boredom of a small town. I’ve spent a good deal of time online, finding episodes, and wasting time with the crap that gets incorrectly labeled (iTMS is so much easier, but expensive). I’m also learning how to tie knots and juggle, but I’d rather be outside with the carny games.

This job has developed a sink and swim cycle: four 10-hour days of gigs, four days of nothing to do except errands and busy work. Rain washed out a few days of gigs this week, though I did manage to drive to Portsmouth, NH and table for a Dave Lippman show. It was an 11-hour day that ended with me driving back to Concord in pouring rain. The early part of that day was spent driving around buying things that I needed. I did that a lot in Burlington too, and am a bit over having to consume.

Today, after a long search, I found grip-worthy sandbags (last Friday the Wheel of Fortune, it’s table, and the sign-up stand all blew over while on the shores of Lake Champlain) online and hopefully made my last purchase for a long while. Still need bowls and a juicer. I’m not sure why this boarding house doesn’t have bowls.

One purchase I am happy about is a new, used bike. I didn’t have any luck in VT, hitting up the Old Spokes Home (they have an amazing collection of old bikes), the paper’s classifieds, following a lead from a coworker, and checking Craig’s List. Finally, I hooked the bike from New Hampshire’s CL, and had to drive to Manchester to check it out. The bike turned out to be just what I wanted: a simple trail bike, working parts, nice hardware, no rust. The wheels turned out to be a bit wobbly, but not enough to really fix them. I spent the afternoon today, riding around Concord, looking for stencils and finding a great cemetery instead (see the current masthead photo). 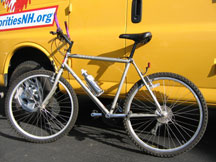 Today was supposed to be a day off, but that doesn’t really happen. I end up getting phone calls, ems, etc. and have tasks to do. I don’t mind, because the gigs aren’t happening. In VT, I worked about 9 days straight, and tried hard to get two days away from everything. I managed to take the day off to drive to Glover, VT to visit Bread & Puppet. I blogged that amazing bit of the week.

A huge gust of wind bent a pole just outside Coventry, VT, so I called the “weekend” off and drove back to Burlington to get the pole replaced and the trailer rig tweaked. Had a conversation with Ben about it and we both agreed to not fly the banners on long freeway trips. A few modifications made the front of the banner rig more sturdy, so we’re all happy.

I’m finding that being on the road like this has moments of complete boredom. Drove me a bit crazy for about 4 days last week. I really wanted to gig the carny show and get out there and perform. Once the rain went away, Vicky, Ben and Jerry’s admin assistant, set me up with four days of gigs. It turned out to be a great weekend full of interesting people and places. Saturday, I set up the games in front of the Langdon St. Cafe, a collectively owned and operated community space in Montpelier. Nice folks!

They gave me free lunch and a beer, and I discussed consensus-based decision making with a few of the workers there. Took a break and walked around Montpelier and found stencils. Montpelier is the smallest capital in the USA (and the only capital with no McDonalds), so I saw most of it in a 10-minute walk. Went back to the cafe and met some folks working in the infoshop above it. Back downstairs, Esme, a cafe worker, bought me a beer. I met Carl, a radical farmer who farms in the city limits (could Montpelier be the only capital in the USA to have a farm in it?), and was invited to Barre, VT (pronounced Berry) on Sunday for a May Day dinner and union meeting.

Sunday’s weather shined dry and clear, so I headed back to Waterbury, VT for another gig at the Ben & Jerry factory. Hung out with the folks that were giving tours, got to take the tour of the factory backwards (mostly factory machines), and got a free scoop of the new American Pie flavor. Had a good time mixing it up with the crowd and felt like I was starting to find a rhythm. The set-up/break-down went great; I set timing records.

Barre is the next town over and has a long history of radical politics. The dinner took place at the Old Labor Hall, a mostly run-down building with a long history. Not much to report except for SLAP, a group of radical college students at UVM. They had a May Day protest planned the next day in Burlington, and got a standing ovation after their great reportback about their work on workers-rights issues at UVM. Senator Bernie Sanders was the final speaker, and immediately left the event after his speech. I had no opportunity to give him one of our pens.

I saw Bernie again on May Day in downtown Burlington. A carny happened to be on Church Street, and was giving me the rundown on how he worked the profits (and the rubes), when he looked over my shoulder and yelled, “Hey Bernie!” I immediately turned around and yelled “Care to slam $60 billion out of the Pentagon’s budget?” He didn’t have time and rushed by. Waving my red and yellow sledge hammer didn’t seem to help.

Ben was at this last VT gig, and tried the High Striker a few times. He mostly hung back, took notes, and video-taped me as I tried to get a crowd. The carny I spoke to said getting the crowd was the most important thing. That, and giving away $0.70 toys for a $2.00 chance to ring the bell. Anyway, I found the again, and felt more comfortable in giving the political spiel.

I had errands to run and a 2-hour drive to Concord, so I broke down early and had a late sushi lunch with Ben. On the way to the restaurant, we walked by Mike Gordon, former Phish bassist, and he recognized Ben. Ben didn’t notice him, so we kept walking. I was officially CBA (cool by association). At the restaurant, over unagi, wakame, and sake, Ben gave me his notes and said that he was glad that Sensible Priorities hired me. “I think you’re the right person for this job.”

Standing by the CarnyMobile on Church Street, about to drive to the Real Show in NH, I told Ben “I’ve always wanted to have a job, that’s creative, physical, and political….. Thanks for giving me that job.” We shook hands and I was on my way.