Wait, what day is it? Have I actually made it to 10 PM on a Thursday night? This morning, or was it two days ago in San Francisco, I almost had a beer with Lil John. Not just any beer, but VB. Victoria Bitter. THE beer of Melbourne. So said my Qantas neighbor Lil John. Peat and I made it through the flight. He walked through customs with no attention given, but I stammered through my initial questioning with an agent and ended up in the short line. The kid who searched my bags and asked me many questions seemed amused at my reasons for coming to Melbourne: Critical Mass and Grampians National Park. “Where is your bike,” he asked? “Melbourne has winter bike rentals, don’t they?” I asked. “I don’t see any bike things,” he mentioned. “Well, there’s my bike light, my cuff clip, and my bike gloves. Oh, and there are my thermals for the cold weather.” After talking stencils, bikes, and other things, he let me into the country with a “there ya’ go”.

I was indeed cold here in Melbourne, Australia. Peat and I took the Skybus to Southern Cross Station, had an amazing espresso at a nearby cafe, and then parted ways to find our respective crash pads. Peat took a taxi to the Per Square Metre space and I chose to walk through Melbourne Central to Ha Ha’s space. I hoped to find stencils, and instead, got cold. At least the customs agent gave me my scarf before he stuffed all my things back into my grip.

Ha Ha’s warehouse, named The Blender, sits right near the Queeen Victoria Market, with hostels, and car rentals all around. He’s got a nice space, with a gallery in front and an open space in back, cubicled out for individual artists studios. I got a room on the second floor, with a work sink in Richie’s studio beside me and a squatters toilet downstairs that doesn’t have lights. The other bathroom, the broadband, and the shower (currently a hose connected to the washing machine’s hot water spigot) are all in the front of the building, upstairs, away from my room. No worries, I enjoy the art squatter’s life for short spells. Ha Ha talks soft, smiles often, and has nothing but well wishes for me. Claude stayed here last summer. His posters are on the wall in my sleeping area. Stencils are everywhere in the space, most prominently on the walls in the Lane/alley outside. I feel at home with all the stencils and have been humbled my my host’s hospitality.

I meet many folks at the space today, especially Doyle, a joke-cutting artist who kicked down a chopper bike for me to use if I want. No lock, but plenty of coolness. After situating my gear, I sit down with Ha Ha and a map of Melbourne. He marks a place to get sandwiches in the Market, a few galleries to visit (Phibs has a show up right now), and a few Lanes to go to to see the world famous Melbourne street art. I check email real quick and get in touch with JD from Stencil Festival and Damon, a Critical Mass rider. Damon and I arrange to meet up in the evening for a beer and I’ll visit JD at his space around the corner tomorrow. I also get in touch with Alison, whom I’ll visit briefly with tomorrow at her Uni office.

MMM, a wave of jet lag just hit me. 10:34 and I’m still up! My goal today was to make it through the evening to at least 10 o’clock. So this morning, I left the space and wandered around the Market for about an hour. Ha Ha was right- cheap and tasty sandwiches were available at the market. I ate a pumpkin sandwich from one of the delis there.Â  Wandered through the market and noticed that the prices were steep. Nothing seems to be produced in Australia, so all is imported and expensive. I wasn’t impressed by the wares for sell. I hope I won’t be buying anything here that I could buy in the US.

Heading south out of the Market, the stencil tourism began. I found many lanes to meander down and photograph: Little la Trobe, off Little Bourke Seanston, off Bourke and Swanston. The latter was a city sanctioned wall, complete with a stencil that had a permit number on it! Hosier Lane, near the funky-looking Federation Square, was full of tourists snapping at all the insane graffiti on the walls. A children’s class even wandered through while I was there, proving that street art is a tourist attraction here in Melbourne. Down the street, I ran into ACDC Lane, complete with AC/DC stencils, and found some Banksy rats with all the other art. A design class was in this lane, taking notes on the art and pulling out tape measures to get numbers for their projects.

Melbourne seemed like a city of contrasts today. Crazy, twisted, and colorful modern buildings rose above Victorian-era structures. Many older structures seemed to be falling apart and boarded up. I didn’t notice any police, people with dogs, or aboriginal peoples. I noticed Asian-Australians, few babies, and no pubs in the English sense. The graffiti did show up from time to time, but mostly stayed contained in alleys.

OK, I think I should go to sleep now. I’m trying to keep my writing together but am drifting. Yawning. Not typing well. I’ll wake up in the morning and finish my post. Oh, my adapter is working fine. My laptop is charging and taking the juice no worries.

Friday, 25 July
Woke up 9 AM no problem. 1:30 now and am feeling a bit tired so will finish yesterday’s post and hit the streets to keep moving and get through the day again. Critical Mass tonight!

Came back to the studio around 5 PM to check email and get layers for the cold night. Damon had gotten in touch and told me to meet him at Journal Cafe back in Central for a drink. So back down I went, walking the whole shortish distance. Journal Cafe is in the Central Library. I had no idea what Damon looked like, but he sorted me out quickly. “Am I that obvious of a tourist?” “No, I saw the bike button on your hat and assumed it was you.” Over a round of Cooper’s, Damon and I chatted bikes. He told me about bike politics in Melbourne, how the political org is lame, and how Critical Mass is changing start locations tomorrow due to some nasty Victoria Bike Police last month (Melbourne doesn’t have a police force. Only the province does.) A cop named Russell used to command the bike force, and had a great relationship with CM. He understood the lawlessness of it, and acted as a true peace keeper when complaints happened against the ride. Russell even invited Reclaim the Streets to a BBQ breakfast once, so he could meet them and understand where they were coming from.

CM regularly rides a corporate-owned tool road, and the corporation complained to the Victoria government. Things trickled down and Russell left the force and now spearheads an illegal ride in the Melbourne suburbs. Last month was the first time Damon, one of the main CM riders/leaders, didn’t know any of the police. One was being aggressive against the Massers, making one wear a light that wasn’t wheel-generated. This cop also made another rider put his sheep dog, which runs along with the ride and stops when his master does, in a trailer, and did a few other nasty things to riders. So, to cool down a bit this month, the five or so hardcore riders are going to quietly shift the starting point to another location and stay in the northern part of the city. I have also heard that cops will ticket you if you don’t wear helmets or lights (and they charge $500 per spray paint can for anyone underage caught with paint).

Geoff, another CM rider, showed up, so we wandered over to the Waiters Club for an Italian meal. We passed a Banksy stencil along the way, which was encased in plexiglass by the Melbourne City Council. Upstairs in the Waiters Club, we had to wait for a table. This place hasn’t changed in at least 25 years and was definitely a locals spot. With 20 minutes to kill, we walked over to a new, flashy hotel to get 35th floor views of the city. We spent most of the visit in the men’s toilet, looking out the huge bay window down towards the footie field (that’s what the Australians call foot ball…. their version of foot ball). 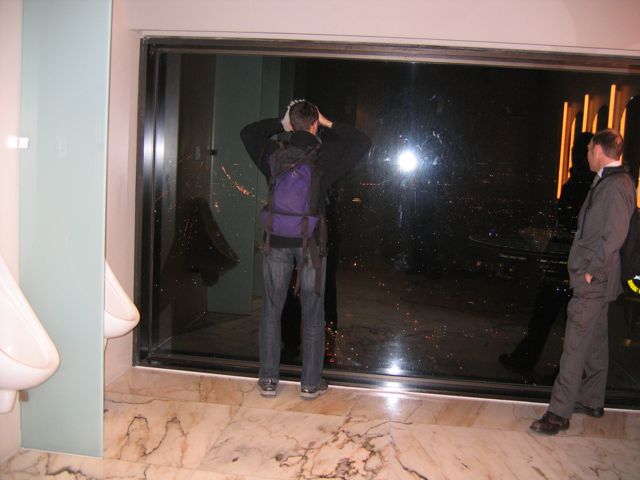 Damon and Geoff check out the view from a 35th floor toilet. Wish I got a better shot!

Back at the Club, over wine and food, we continued to talk about Critical Mass. We shared stories, discussed strategies and tactics. Melbourne, and Australia, seem to be conservative cultures, so breaking the law isn’t done well. But the bike activists had “diversified their investment portfolios” here with rides like the Solstice Ride (50 people the last time, a huge jump), the Chocolate Crawl (ride bikes to different chocolate shops and try it out), and the Bike Drive-In Cinema (a group of riders goes to a car-centered drive-in and watches a movie). I got invited to bike polo on Sunday, and there might be a bike fix going on at the same time.

I won’t tell how much the meal was. Expensive and budget-blowing come to mind, but I splurged knowing that this was a one-time opportunity: my first-ever night in Australia. Walked back to The Blender and started to write today’s post. Then…. out like a ton of bricks!