Didn’t get to crazy with the schedule today. Feeling sore for the last few days of long hauls across Portland (and carrying a backpack for 3 hours last night kept the shoulders sore) so took her easy today. Left NE headed to the Carfree Conference, but had to stop by the Steel Bridge and SE Esplanade to photograph last night’s stencil business. Asked a few locals on bikes for directions and got to the bridge via MLK. 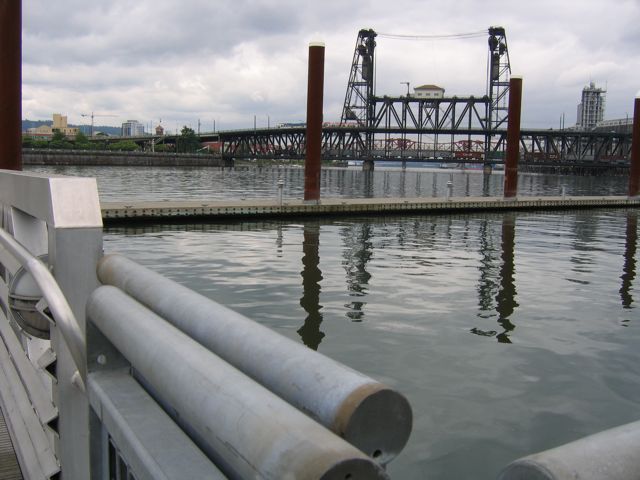 The first spot was still up, but the second spot had been exposed, called in, and almost completely buffed.

If not for a homeless encampment last night, the two remaining stencils (out of maybe three dozen) would have been buffed too. Backtracked to the Steel Bridge and snapped stencil flicks while heading west towards downtown.

Props to Wanda for a great tip on VooDoo Donuts. I stopped by and bought a dozen to bring to Chris’s table “for conversation.” Gothic music played while I asked the employee what was up. I ended up buying three vegan plains and three vegan chocolate covered. I bought three old fashioned donuts and then got crazy. The last three were two blueberries and one vanilla topped with rice krispies. I decided not to eat the maple covered bacon or the ones with captain crunch and froot loops sprinkled on top.

Had to photograph the box after I opened it and ate an amazing blueberry donut. The vegan treats are under the paper.

Arrived to the free day at Carfree Conference and pretty much missed everything. But everyone was so nice. I fell into great conversations with many people and gave Chris a break so he could go hear the keynote speaker. Chatted away with visitors, neighbors, and showed Stencil Nation and talked about Nowtopia. The party then shifted about six blocks down the street from PSU, to a free beer/food/art part at City Hall.

Had a great time at Portland’s City Hall. Went straight to the vegan sandwiches and then got a great local beer. Kept having great meet ups with people. Some of them were local and so amazed that they were drinking beer INSIDE City Hall. Looked at the art, mostly postcards, but also great collages as well as other art. Outside, bands played on stage, Tiago laid down some really good chalk stencils, and the Sprockettes did some amazing choreographed mini-bike burlesque (with cheerleading thrown in). I sat on the front row and took photos for one of the Agents (didn’t catch her crew name) so have none of my own to share. 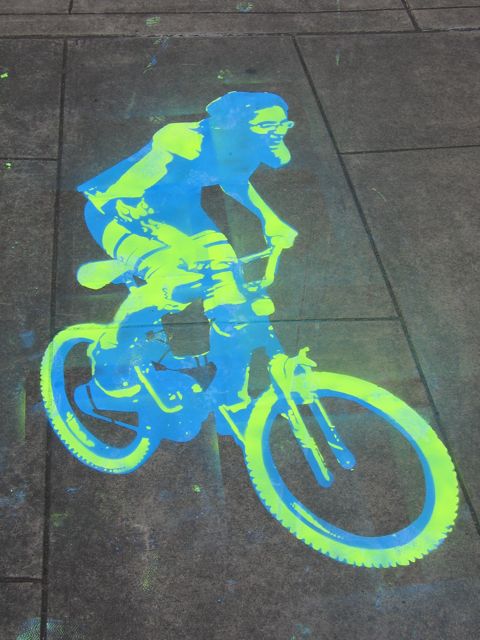 I did watch a young girl take a few whacks at a car pinata. Tiago then took the stick and took down the car in a fury of busted paper mache. shoestrings went flying….

“Do you own a car?” she was asked. “Yes,” she replied. “Do you drive your car?” the MC asked her. “No,” the young girl said before whacking away at the car pinata.

Got an invite to dinner so ended up at the Blossoming Lotus for a tasty, reasonably-priced bowl of beans and rice with spicy peanut sauce. Then the sidewalks rolled up and I headed back to Katie’s. I ended up helping her install a wireless router so am now blogging away on her House of Fun network…..