Monday morning came soon enough after the long long walk to 25 Ave with Chris and his busted bike. We’ve gotten into a routine of waking around 9 p.m., having coffee and fruit-laden cereal, and planning out the day. This morning, Chris was up and ready to fix his bike. He’d also discovered that his phone’s main screen was busted. It still worked, but he had no way to navigate inside his device.

We threw the bikes on the back of the Nissan and went to Mississippi St. to a bike shop and a cafe. We got bike maps of Portland at the shop, which made me extremely happy since I didn’t really know my way around this city via bike. Unfortunately, the bike map doesn’t name streets other than the ones that bikes frequent. I’d have to use a two map system. 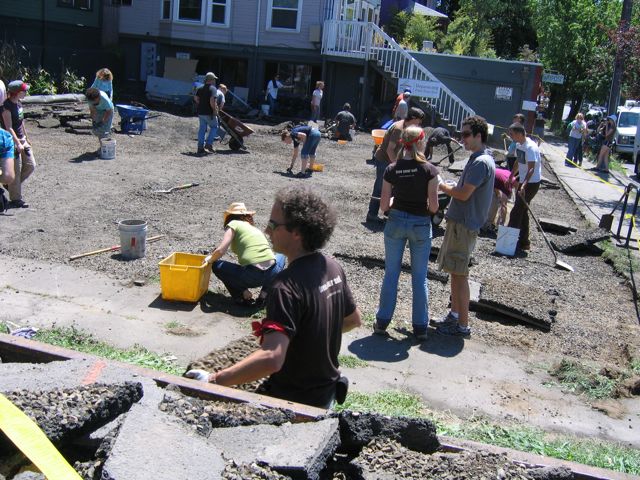 Volunteers ripping up the parking lot for an upcoming garden planting

I found out tonight that Depave.org is part of City Repair here in Portland. The event today was all about tearing the asphalt out of a parking lot and then eventually planting a public/community garden there. I rode up to the lot while about three dozen people tossed big chunks of asphalt into wheelbarrows and then threw them into big dumpster bins. I assume that there would be a reuse for the debris. Shovels and rakes then started swinging to take the loss gravel and make a huge pile out of it. There was also the need to take the tiny pieces of asphalt and concrete out of the gravel and put it in its respective piles. 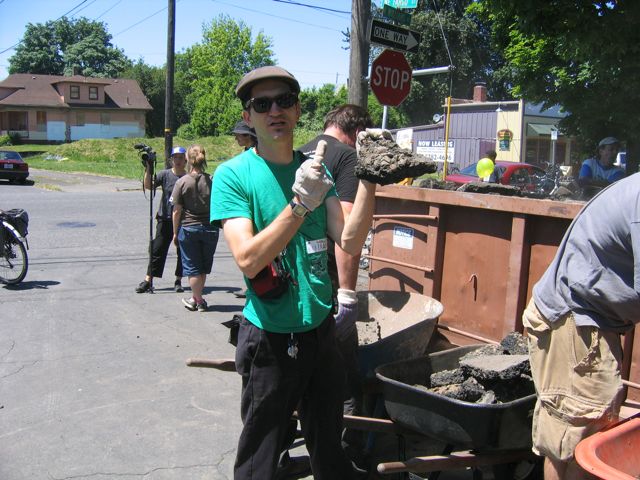 I love manual labor, especially when it is community/acton dag style of labor. And this was a demolishing job, so the skill level was minimal. I signed the volunteer waiver, borrowed a pair of gloves out of a bin, and jumped right into the fray. I started off by picking up the larger piles of asphalt and doing some wheelbarrow trips. I then picked through the gravel and pulled out smaller pieces of asphalt. Finally, I raked gravel into small piles for shovels to dump into wheelbarrows. Ended up with a big blister on my right hand thanks to my frantic raking.

Met great people along the way, ate some Food Not Bombs style beans and rice on a tortilla, and checked out the rendering of what the garden will look like once they plant it. If anything could’ve been better, the music could have been faster and jumpier for the proper workingman’s need. I even heard my stencil reading get promoted over the PA when someone read off the Pedalpalooza schedule for the day.

After the depaving of the lot, I rode back to Katie’s place, stopping along the way to photograph a few stencils. I got back just when Chris was arriving. His bike only had a busted tire, so he paid very little to have it repaired. His rim was fine; his handlebars OK. Very little damage to him and his bike from the curb crash. I started repacking bags for the slide presentation at Powell’s Downtown while trying to call Kim and Tiago and Klutch to coordinate a potential dinner and meet up.

Michael Med-O showed up to pick Chris up and go to his talk at the Hawthorne Powell’s. Good to see him outside of the SF arts/activist ghetto. My dinner idea didn’t work out with the artists, so I went to the Tin Roof with Michael, Chris, and Katie. We caught happy hour, which meant cheaper food as well as beer. I had a great dish called Cherry Garcia and an OK salad. Then I had to split for Downtown. Wanted to get to Powell’s early to meet Kim and maybe see Klutch’s art at the Adidas Store.

I realized at the Tin Room that my two map system had failed. I had left the maps, as well as my camera and water bottle, at Katie’s place. Had no time to backtrack to get it so went to Powell’s with no map to guide me. I made it no problem and my set up quickly turned into a good deal of work. Kevin from Powell’s was great, extremely helpful, as well as the other employees that I interacted with.

The slide pres. was going to take place in a gallery area on the third floor. I had to figure out how I was going to present the pres. as well as set up a table for art and book signing (Tiago and Kim wanted to sign the book along with me). Kevin and I worked it all out just in time. The crowd started showing up about 15 minutes early. Tiago arrive and it was good to see him and his wife. Actually, it’s nice to finally get to meet all these great artists after sometimes years of online conversations.

Tiago’s Pedalpalooza tie-in was an amazing coup. Kevin told me afterwards that at least 100 people attended the event. He had to put out extra chairs to seat the standing crowd. Seeing all the people warmed my heart and got my stencil geek juices flowing. I asked the audience how many people where there for the Pedalpalooza event. About 40 people raised their hands. I promised them that I’d be as short as possible and that we’d go on our stencil bike ride very soon. I asked the audience how many had never made a stencil, and over a dozen raised their hands.

I read very little during this second run of the slide pres. I did read the introduction section via the online notes, but basically used the notes as reference for the rest of the pres. It was 54 minutes long in Eugene and 50 minutes long at Powell’s. I am starting to figure out things to say for the slides, so am beginning to get the bit together as the carnies say. Or am getting the spiel in order. The Q and A was short, but there were some good questions. One about gallery work making street work more legit pretty much stumped me. I couldn’t quite figure out what to say in response to that question.

Powell’s may have sold over 15 books tonight. I think I signed that many. It was great to have Kim and Tiago sitting with me and signing books too. Made it feel like a collaborative effort. Kevin was breaking things down as we signed so I quickly packed my things so that I could make Tiago’s stencil bike ride. I was the last one down but had my three bags ready to go. Unlocked my bike and then about 30 of us headed out.

I was hating the fact that I didn’t have my good camera because we were about to head into some nice stencil spots. ahhh!

Tiago took us to a park and explained to us what the ride was about. Using a theme I have from the slide pres., he informed us that this ride could be participatory if anyone wanted to be. So we had to look out for each other and no photography unless you ask for permission. That said, we headed to the west esplanade on the Willamette River and then crossed under the Steel Bridge. We stopped to check out some stencil work.

The scent of aerosol soon started wafting through the mass of bikers. Tiago started again and we stopped on the East side of the Steel Bridge and checked out some stencil work up above us. More stencils started appearing from the riders and that area got hit up as well. We headed south to the Eastbank Riverside Park. Here, it seemed like everyone was painting stencils. I kept walking around and seeing new work go up.

An SUV went up with two people playing volleyball over it. Some squid went up as did other animals. George Bush went up, holding a gas nozzle. Another stencil went up: a mushroom cloud with the phrase “Bomb Black Rock” under it. Anti-Burningman? Yes, the painter answered.

We continued to head south, meandering through Brooklyn, having Hot Peppers (police with sirens blasting) blow by us. We passed the Ross Island bridge and continued to bike along the Springwater Trail. Eventually, Tiago took us a short way down a dirt trail to the remains of a bridge that went over to Ross Island. More stencils went up and merriment was had by all.

I had great conversation along the stencil bike ride. Met people from Toronto who knew Tino (he’s in the book). Chatted with stencil artist or three, joked with the locals, and continued to get schooled about Zoo Bombing. “You bombed on your big bike?” one person asked. “You seriously get respect if you bomb with a thrift-store kid’s bike with wheels under 15 inches in diameter.”

I started getting cold and worrying about my mapless trip back to the NE, so I asked a local how to do it. He simply yelled out “Who’s going Northeast?” and a group raised their hand. I ended up tagging along and was given the nickname “SF” when they spoke to me. We had to ride by the Steel Bridge stencil work, so stopped and photographed the images. It took about 45 minutes to get back home, but the company was great and the ride was entertaining.

I do think that I’m going to have that bike messenger funk smell due to riding around this spread out city all day. Guess a Carfree Conference, and a Pedalpalooza crowd can take the funk. Hopefully, they’ll take it to the bridge (sorry, easy joke here in a city with at least 11 bridges).