The current members of SoundLabSF have disbanded the org after about six years of producing, making, and teaching sounds to the masses. I have removed the static page and posted it here for archival purposes. World Remix will still keep it’s static pages (there could be more). Below are a few rambling thoughts about the last six years I spent with an amazing group of sound artists.

On a cold January night in 2001, I nervously pulled on Deborah’s old overalls and wandered into the studio with Koa. We’d only really rehearsed our bluegrass version of Love and Rocket’s “Express Kundalini” a few times, but had already worked out an Ozzy Osbourne breakdown and a few good jokes. Anyway, the 20 or so folks who braved the chill to see Free Radio Legumes “broadcast” from CELLspace wouldn’t care about the quality anyway… 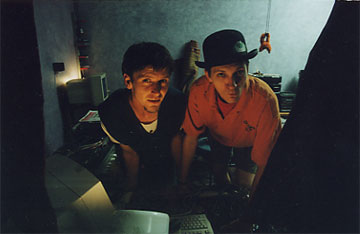 Co-founders/DJs Pod and HappyFt look through the window of SoundLab’s studio F control room. At the time, we had about 15 members (or may have shed many of them), chief among them Rob Monk, Rob Penn, Simran Gleason, Koa, Xtian, Deborah Eliezer, and Delphine Mei. Fisheye photo by Karl Seifert.

My main goal within the SoundLab was to bring diverse music back to CELLspace, and to San Francisco. I still look to the Yair Dalal concert as an amazing dream come true. At the time, he couldn’t get a gig in the Bay Area, so took a huge pay cut to perform for our World Remix. Yuri Lane hadn’t broken out as one of the premier theatrical beat boxers in the country, so his opening show was another high point of my creative career. Hearing Dalal speak of horrible atrocities commited upon Arab musicians, and the flack he caught playing with Palestinians rang louder a few days later when 9-11 went down.

Free Radio Legumes still stands out as the strangest event I have helped make. Using the theme of a fake variety radio show, we set up gear in a semi-circle and made noise with a master mixer trying to make sense out of it. We had improv moments, fake commercials, characters, and other strange segments. The small audience didn’t leave and seemed to love every odd minute.

Simran’s Mix Tape From Mars performance at the first World Remix, for the headlining Ali Khan Band, remixed my thoughts about how to put different types of music together. Having Andrew Chaikin (aka Kid Beyond) throw out an early performance in CELLSpace is another sweet highlight for the SoundLab.

Having financial problems as well as personal problems, I quit the SoundLab earlier this year. Sold much of my gear and backed away from the “abused hobby” of making sounds. Still, I DJ and want to work through my hang-ups around this artform. Hope to keep this blog’s sound category fresh with HappyFt goodness too (LegumeCast coming soon).

SoundLabSF seeks to create community through collaboration, experimentation, performance, recording, and distribution of sound. The SoundLab enriches both its own work and the surrounding community by developing artistic projects and educational programs that cultivate a voice of independent culture(s).