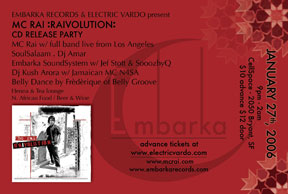 Embarka Records and Electric Vardo present
A Night in Tunisia with MC Rai: A CD Release Event for Raivolution
January 27th
9 pm -2 am

The San Francisco debut of Raivolution from Tunisian singer MC RAI that brings the underground alternative music world to the doorstep of the Sahara. This will be a night to remember.

Raivolution: The debut album from singer MC RAI. A hard hitting collection of tracks that brings the underground alternative music world to the doorstep of the Sahara. The disk spans the range of styles with Arabesque bumping grooves, Raggaton, Indy Rock, Hip Hop and straight up Rock Anthems. Although the vocals are in Arabic, the emotion that comes off the music is universal and heartfelt.

Raivolution is the new generation of Arabic music.