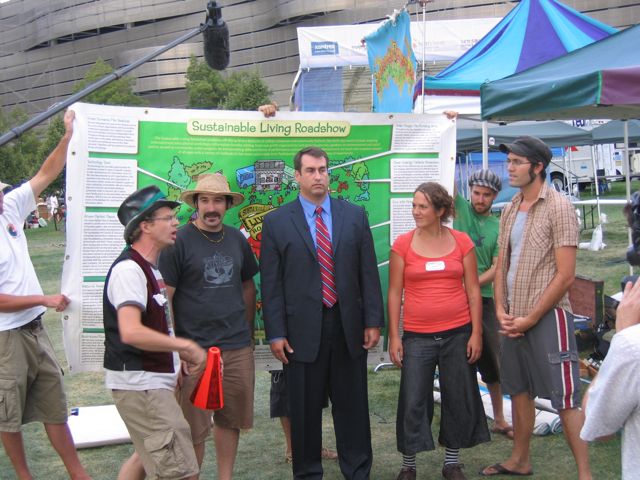 The Daily Show meets the Roadshow, as Jonathan freaks out Rob Riggle. Who’s the freak, tie-boy?

Made it to Green Frontier Sunday but had to walk the whole way. The Free Mall bus had stopped running due to a protest. David and I walked down 16th St., handing out flyers for our event. Saw remnants of the protest, and heard it through a Sheriff’s radio, but turned off towards the games before seeing the excitement.

Small crowd at Green Frontier, but the event looked great. Towards the end of the event, I noticed two suited men walking by with a fancy camera crew. Closer scrutiny revealed one Rob Riggle from Comedy Central’s “Daily Show.” Jason Jones and another woman are with him too. I tell David to go give them a flyer, and he does. I call Zach and tell him to get his ass back to the games to schmooze Riggle and Jones, and he’s around the corner. Jonathan’s with him.

We watch them ride a train under the sculptures we’re set up by. They do a few other things around the Green Frontier festival. While they’re shooting takes in front of the large windmill propellor, Jonathan, David, and a few other carnies bum rush them between takes. They’re wearing the Freak Show banners we usually tie up. Riggle looks at them like they’re insane.

We assume that they’ve been scared off, so we start to take down the games. About ten minutes in, Riggle walks over and says “OK Roadshow, show us what you got.” We don’t have much, but we do have the Freak Show banners. So they film a few takes of the freaks dancing behind them. Before this, they film a straight shot of a few carnies in front of the vision map. Not as good as the surreal dancing GMO freaks, but Jonathan does manage to go into his “hey there, ho there” tirade, causing Riggle to say “what the fuck did you say?” Jonathan hadn’t slept in two days so his burst of energy was a bit scary. Who knows what they’ll use for their bit.

I am the Co-Manager of Improvisational Chaos, along with Moe, and I have been trying my best to ride this crazy wave. Several recent examples of sucker punches include: running in to a midnight SLR meeting on the sidewalk. David just found out that the stage is too wide to go through the gate into the baseball field in Hirshorn Park. So I help them figure out a new configuration for the Roadshow.

Wondering if the learning curve of the troupe is advancing or sticking in a stagnant straight line of learning. Co-facilitating a meeting last night (at 10 PM) to work out all the tasks and needs for today and then watching our hopeful plans devolve into a tour bus full of Internet zombies doing last minute problem solving (no hotel room for the Reggae star, the beer permit fell through, etc.) Once the dome started going up, the stress grew. I have gone two days without nondairy milk in my breakfast cereal so walked to the local health food store to buy some of my own. Decided to buy soy ice cream bars for the peoples since we aren’t eating desserts with our meals.

But Monday did progress rather well considering. Nick became the brawn of the day and trudged through in amazing speed. I ended up ‘net zombie-ing to get the PDF of the 30 foot dome and print it out. Took me about two hours to do this while Nick paced about ready to set that damn thing up. The Roadshow began to take shape along 16th Street. The games got moved in after the road was closed off to traffic. A a vendor showed up, as did an alternative vehicle owner. The solar stage showed up late this evening.

The Moroccan tent went up in a flurry on Burning Man-esque barn raising. Lots of beer showed up around that time and folks held on to ropes and met us all as well. I have been in MOOP (a Burner term for litter) mode the whole tour (picking up after people seems to be one of my skills) so had a grand time (not) picking up all the cans. I held the center pole a bit with David and then held rebar as Tyler, fresh off the jet, pounded away. Welcome to the chaos my friend. Moe set up a mechanic’s visit to check out the transmission of Pricilla.

She took the mechanic for a ride so he could hear and feel things out. Taking a right turn into the parking lot that connected to our HQ lot, Moe turned short and clipped a diagonal guy wire on a power pole. The huge force of the bus pulled the pole about, casing a wire to snap in a flash of lightning, followed by a short crack of thunder. I happened to hear the bus hit the wire so saw the wire snap and whip over the two other wires. The police and fire department were all over the accident. Moe and the mechanic weren’t hurt, nor was there anyone walking under the live wire.

Power went out all along Boulder Street so everyone walked outside to watch the excitement. Moe, a super nice person, went door to door to apologize for the accident. I loaned her $4 to buy a scoop of ice cream since their stock was now melting. She got a fine and lost two points for “reckless driving.” We’re turning into outlaws!

The dome is up, but the cover isn’t on yet. I’m sitting in the condo we’re using to shower, chilling out in the AC clean as a whistle. The film crew that’s following us around is upstairs listening to Metallica and working hard on a video short from all their current footage. It’s gonna be an all-nighter for them.

Marty gave me an herbal cigarette to help with my congestion. He has bags of herbs that he combines in different ways to create various flavors and medicinal uses. I smoked it while working on the games, thinking that inhaling herbal smoke wouldn’t be a good thing. But I do feel better. Thanks Marty.