A few weeks ago, I got to sit in on a talk from the Dalai Lama. The theme of the talk was “how to make positive change in the world.” His Holiness, as he is addressed, spoke about basic Buddhist concepts that where mostly common sense tactics on living right in a world of suffering, like giving compassion to other beings fills one with positive feelings, thus making the world a better place.

There was a brief question and answer session after the talk, where His Holiness fielded questions from his translator via cards. About three mentioned the current situation in Tibet. Among other things, His Holiness suggested that we visit Tibet, return home, and share our experiences with any Chinese people we know. He also said that what was happening there was ethnic cleansing, and that the Chinese leaders do not decide from within their hearts.

His Holiness did not mention the recent protest on Mount Everest by a group of Americans calling for a free Tibet as that totalitarian capitalist state prepares to host the upcoming Olympics. The Dalai Lama did not call on an uprising in that region, nor did he mention anything about going home in an attempt to quell the violence and Han Chinese assimilation.

Later that week, I saw the movie “The Devil Came on Horseback” at the SFIFF. Telling about the current genocide in Sudan via the eyes of a naive former Marine Captain, this documentary shows the grim realities in that region via this American’s photographs. The doc briefly mentions how China holds some of the blame for this massive amount of violence. China has developed Sudan’s oil industry, and they kindly take the money from that industry and sell weapons to the totalitarian Islamist government of Sudan.

The Festival held a question and answer session after the viewing, so Darfur activists (none from Africa) and the director fielded questions. China came up as a key player in the UN negotiations with the Sudanese Junta. Being permanent members of the Security Council, China has allowed the slaughter to continue in that forgotten part of the world.

Ironically, I exited the Bill Graham Civic Center after the Dalai Lama talk, and walked over to a Darfur protest on the Civic Center green. The Dalai Lama was right across the street from this protest, most likely aware that the massive suffering in Darfur mirrors that of his own precious Tibetans. But he was unaware that there was a protest going on during his talk.

In a two-pronged approach, it appears that the USA and Europe is using the upcoming Olympic spectacle, where the world arrives to a one-party state, known for many human rights abuses, to celebrate peace and the democratic competitiveness of athletic events. Media has started to pick up on China’s blatant open-for-business attitudes with Darfur. The Telegraph UK just posted an article stating “China sold arms and ammunition worth Pounds 12 million to Sudan in 2005, along with spare parts worth Pounds 30 million which could have been used to keep military aircraft airborne.”

The Washington Post also reports that China has agreed to help the hapless African Union Peacekeeping force, only after “the Darfur crisis has become particularly sensitive in China because of suggestions in the United States and Europe that people should boycott the 2008 Beijing Olympics to demonstrate opposition to Chinese policies in Sudan.” In a sign of modest budging, the Chinese government has agreed to send 300 engineers to the troubled African region.

Meanwhile, the death toll has risen to as many as 450,000. The images I saw in that documentary where traumatizing enough to make one helpless in that ongoing horror. The panel offered little in next steps for making a change, other than getting Nancy Pelosi to put Darfur into Congress’ agenda. China, and Russia, seem to hold the better hands of cards for working this situation out, but have on incentive to do so. As long as they can break UN resolutions, why bother.

And what about Tibet? After a recent train link opened up into that region, more and more Chinese will continue to gentrify the region. An undercover reporter wrote that “the Chinese government has relocated some 250,000 Tibetans – nearly one-tenth of the population – from scattered rural hamlets to new ‘socialist villages,'” as well as “pouring hundreds of millions of dollars into road-building and development projects in Tibet, boosting the economy, maintaining a large military presence.”

With the press coverage of the Olympics on the upswing, human rights groups and diplomats are stepping up the pressure on China via Tibet and Darfur. For now, we can only hope that our elected governments pull their heads out of the sand and try to take their eyes off of the money pile. Is there hope for these two stricken regions, or is the new Chinese dream something like the “neo-revolutionary” image found at this Chinese construction site? 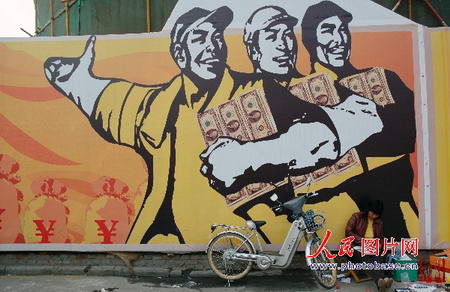 In a new world of no borders for capital, exploitation, industry, and pollution, Tibet and Darfur stand as obvious victims in the crimes of the bottom line.