larger versions of these photos are below

Halloween Critical Mass filled the streets with costumed goodness, and holiday oddness. But the freaks and strangeness glazed over an underlying unease of massive fires, escalating war rhetoric, sub prime melt down and continued oppression of indigenous peoples in places like Gaza, Oaxaca, and Baghdad. We avoided Union Square early on by turning on to Stockton. Coming out of the Stockton Tunnel into China Town, I rode up to a person trying to light an American Flag. After failed attempts with just a lighter, a fire juggler stopped and handed over a small amount of fuel to get the thing lit. As I took these photographs, some Critical Mass riders groaned and complained about the spectacle. I began to yell loudly that flag burning is protected under the US Constitution as free speech. Time and again the Supreme Court has ruled in favor of allowing someone to express their displeasure with government via burning what for some represents an empty symbol based upon one of the English Corporations that funded colonization of native lands in the 18th Century.

I dressed up as a radical bike rider, dressed in red and black with a baret bearing a bicycle button. I shouted revolutionary bike slogans and had some dynamite (fake theatrical prop) to pull out if we had gone into Union Square. Almost got to use it a second time but we kept going down Market Street. Things soon broke up at Duboce and Valencia, with cops scattered all about trying to contain the ride(s). I followed a group through the Wiggle up to the Panhandle and then turned around. Caught a small batch of riders at 17th and Dolores and then saw a larger ride go by at Church and Market. About 20 minutes after that I heard the SFPD helicopter hovering over the Mission (again). And after that, on 16th and Valencia, bikes where all over the place. 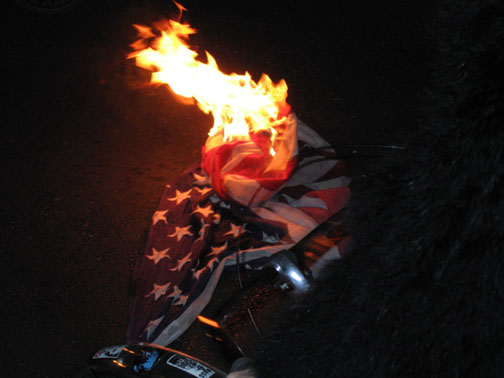 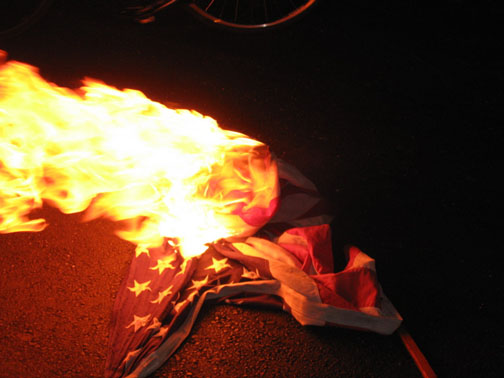 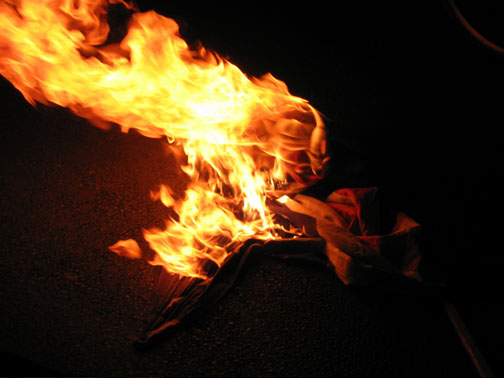