Currently residing at Mercy Hot Springs, an off-the-grid spot east of Hollister (just off the I-5). Didn’t think I’d make it here yesterday due to several delays in SF and Oakland. After numerous hours waiting for my ride, the Big Tadoo Puppet Crew veggie-fuel bus, to show up (rain and load-in delays), I got picked up at my place on 17th Street around noon. We went shopping, fueled up via veggie oil from a local Vietnamese restaurant, and stopped by CELLspace briefly to pick up some things. 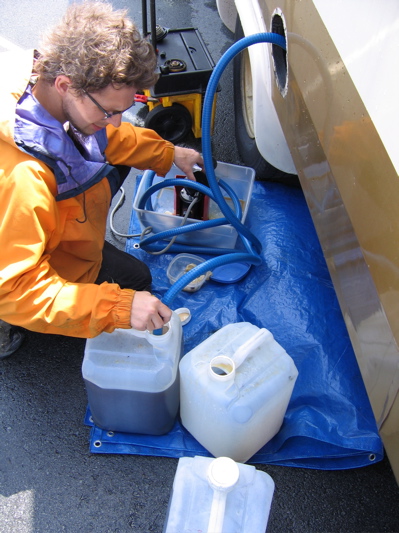 After the three hour delay, we hit the Bay Bridge on our trip south and stalled on the bridge. Jonathan Youtt, main Big Tadoo driver and mechanic, quickly went to work troubleshooting the problem. I meekly suggested calling 911 to get a push off the bridge, but Jonathan found a blown fuse that a new fuel pump most likely caused. Replacing the fuse got us over the bridge, where we stalled a second time in the right lane of an exit.

Jonathan scurried over and under the engine as I turned the ignition on so he could try to listen to the new fuel pump turn on. He couldn’t hear it, so quickly unhooked it and prayed that the standard fuel pump, tired from pumping veggie oil, would get us to an exit in Oakland to find fuses, filters, and diesel (no biodeisel was available and must be used to heat up the oil). We hit Broadway’s motor mile and drove up and down to various auto parts places to find what we need (the filters and deisel proved to be harder to find). In a more quiet spot, Jonathan still cannot hear the new fuel pump, and thought that it has been blown due to a too-powerful fuse (one of the auto parts places told him the pump runs on a smaller ampage than he started out with).

Finally, around 4pm, we left the Bay Area and headed south to the first-ever Alternative Fuels Summit at Mercy Hot Springs. On the way, we easily switched over from diesel to veggie, and only stopped once to change the veggie filter. I photo-documented the step-by-step process that Jonathan went through to make the change, and realized that your average soccer-mom wouldn’t dream of going through all of this for free fuel. At least for the time being. 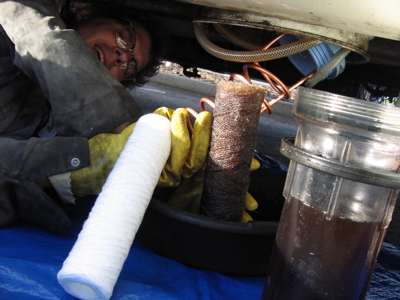 Jonathan shows the difference between a new and yucky used filter

What I have discovered today at Mercy is what a workshop leader called the “Pioneers of Alternative Fuels”. A community of people like Jonathan, and his partner Emily, are all here this weekend to share knowledge about veggie fuel, biodeisel, ethanol, hydrogen, and other sustainable forms of power that can make automobiles go. Biodeisel autos of many kinds (buses, trucks, SUVs, Mercedes-Benz, and brand new VWs) sit with their hoods up and their owners networking and skillsharing. A truck that runs on hydrogen has a windmill attached to it for extra off-the-grid power. Buses with converted veggie oil engines show off their filtration systems. Their crews share on-the-road stories and talk about the future of the used oil as a source of free fuel. All these machines are owned by people consumed with ending petroleum dependency and creating systems that will allow communities to convert their own autos.

I sat in on workshops that dealt with ethanol issues, veggie oil issues, making your own ethanol stove out of a beer can, and even a permaculture introduction. This summit is all about DIY sustainability, including growing food. Tonight, Jonathan, Emily, and I will perform our puppet show, a circus medicine show that means to give away veggie oil for fuel. After that, and some other performances, Hot Buttered Rum String Band will play a couple of sets. All the artists performing have toured extensively in veggie oil buses. Tomorrow there will be workshops on getting funding and discussing legislative issues.

These pioneers are hippies, farmers, artists, and everyone in between willing to learn the basic skills to convert their autos. Like Jonathan, they troubleshoot on their own, without the millions of dollars in research and development that the auto industry puts behind their engineered machines. These pioneers have put maybe hundreds or several thousands into thier R&D. Most of the equipment is off-the-shelf and maybe modified by DIY and trained mechanics who believe in bringing down the current multibillion dollar oil, gas, and automobile industries. Biofuel refinery is DIY too, and communities around the United States are organizing to brew their own.

And these people are excited about their movement. The Alternative Fuels Summit can only get bigger and better as the United States slowly wakes up to higher fuel costs. The Washington Post just reported on a group of conservatives who are trying to convince Pres. Bush that alternative fuels are better than petroleum. That’s old news here at the Summit, and most people here don’t want corporations getting involved in alternative fuels. Decentralized and non-GMO are buzz words here this weekend.

Interesting that the mainstream medi missed this weekend. An indy Toronto-based crew videoed all weekend, hoping to score a deal with the Discover channel (they have connections). This blog entry may be the only written documentation of the event. Guess media is too busy covering the Pope’s funeral to notice this amazing aggregation of brain and will power that’s amassed here at Mercy. Guess the hottubs, beautiful vistas, clean air, and starry sky didn’t entice them either. For now, the alternative fuel pioneers will remain on the down low, but as these pioneers continue to organize communities on the grassroots level, this knowledge will only get more mainstream.