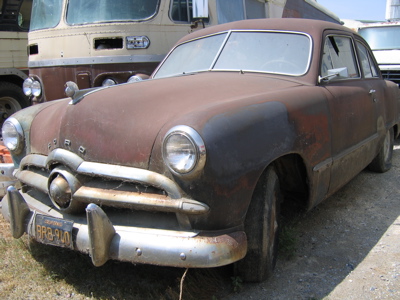 On the way up to Portland’s Village Building Convergence, Jonathan wanted to stop at the “Bus Graveyard” to meet the owner. I wandered around the yard, snapping photos, and came across the legendary Studebaker. Fozzie and Kermit hit the road in it, landing them smack in the middle of the Electric Mayhem (which Jonathan had dolls of on the dash of the Wonder Truck). 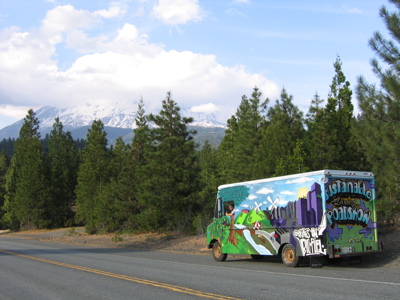 We stopped at Mt. Shasta to take a few photos of the van. Such a photographic moment! The running joke up this way was that UFOs where landing on the cloud-covered mountain, and the seagulls at the rest stop where the aliens. 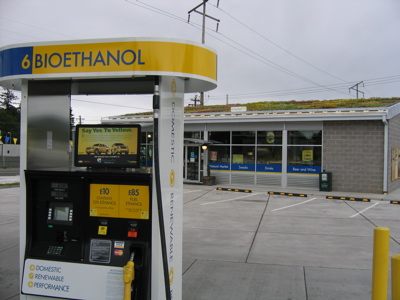 What an amazing sight: a biofuels convenience store, complete with living roof and solar panels for that “off-the-grid” statement. Organic fruit at the counter, cafe of healthy drinks, and Grateful Dead playing on the radio. This is the first of its kind biofuels station in the USA, so credit goes to SeQuential for pulling it off. 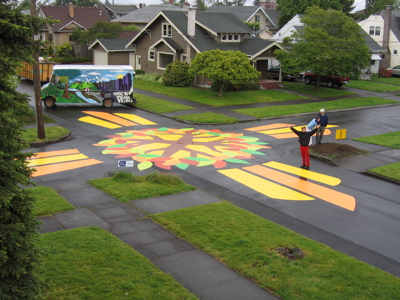 Jonathan climbed a 20-foot ladder to shoot this traffic-calming VLC/City Repair mandala (along with me and the Wonder Truck). Two neighbors came out to chat with us (they’re behind me staring at the mound where a huge tree had recently fallen over) and told Jonathan to climb the ladder for this great angle. 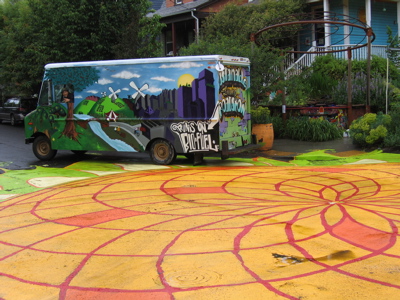 Another traffic-calming mandala in Portland, this time with natural landscaping and structures built around it. 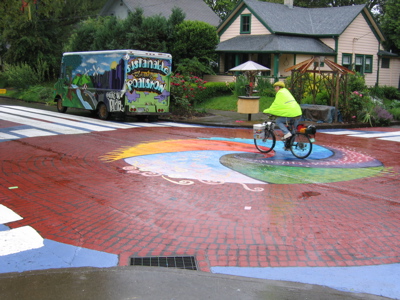 A third City Repair mandala. If you look right behind the cyclist, you’ll see the free tea kiosk. To the right of the cyclist is a cob bench construction project, currently not being worked on due to the rain. We had some tea, and walked around each corner checking out the naturally-built projects. They where put there to slow down the traveler, encourage them to get outdoors, and help meet the neighbors (which we did at almost every stop). 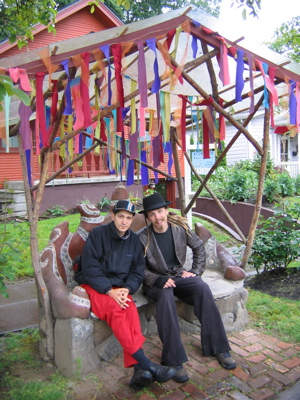 Nick da Creature and I take a break on a cob bench. There was a cob newsstand at this intersection, serving up free copies of the neighborhood paper. There was the free tea kiosk, and a free box. Amazing that we spent a wet 30 minutes hanging out at a small ‘hood intersection. 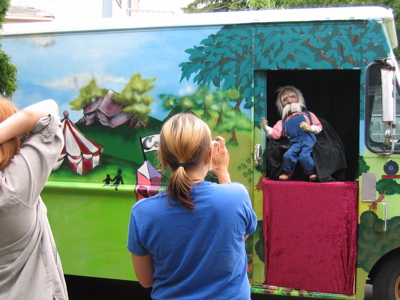 Johnnie UniteUs made an appearance at the Puppet Theater VLC project. This was the first performance off of the Wonder Truck Doorway Stage, and the workers at the site loved it. Jonathan and I spent 3 hours there the day before working on the cob wall. This was our third and final visit to the site, so we where glad that Johnnie could show up and sing a song or two.