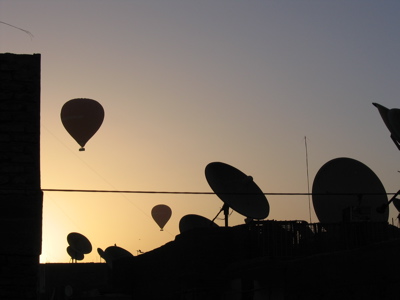 The overnight train from Cairo dropped us in to early morning darkness at Luxor. We got to our hotel a bit early, so had karkady on the roof top’s eating area, and caught the tourist balloons taking off. Though a one-party-ruled country, Egyptians love their satellite TV! 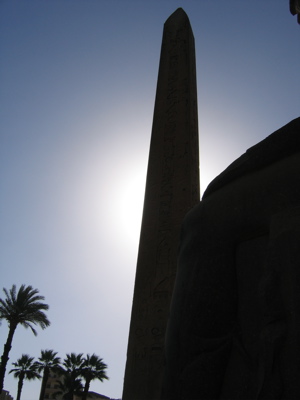 Still tired from the “sort of” sleep on the train, Laura and I checked in and decided to walk over to the Luxor Temple before the busloads of tourists arrived. We mostly beat the crowds, and enjoyed a self-guided tour of the complex (complete with mosque) of this ancient ruin. Caught this photo walking in through the First Pylon of Ramses II. 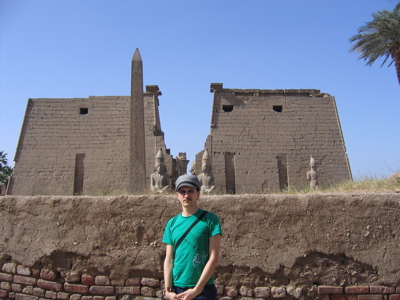 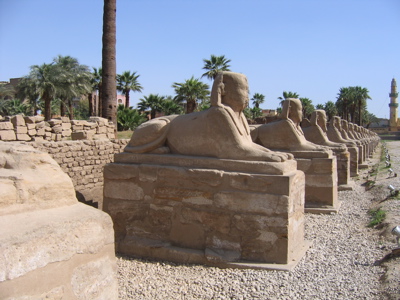 The Avenue of the Sphinxes lines an ancient ritual route that ends at the Karnak Temple complex. We overheard a tour guide telling people that there are sphinxes still buried under modern Luxor. Sometimes homeowners uncover them in their basements. 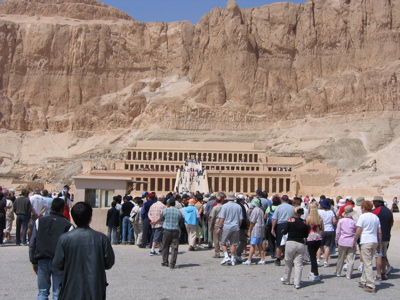 Masses throng the Deir el-Bahri Complex, across the Nile from Luxor, features Djeser-Djeseru, or, as most call it, the Temple of Hatshepsut. 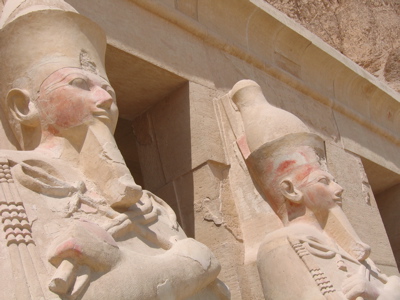 Reconstructed images of the woman-pharaoh line the facade of the Temple of Hatshepsut. Mostly ruling during peaceful times, this monument, where not defaced by her competing stepson Thutmose III, shows Egyptians on trading expeditions. Much different from the slaves, war, and conquest of Ramses II (who loved building things).