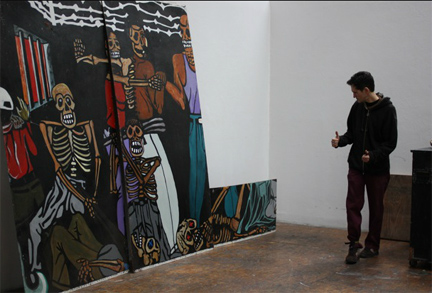 Article and Photos by Noah Arroyo (more photos on their page)

Artist Russell Howze isn’t sure how they got to Cell Space, but five more pieces of a historic mural series appeared at the art collective on Monday and will be turned over to its caretakers.

Howze said that when he arrived at Cell Space, at 2050 Bryant St., the pieces were in a back room.

Mission Loc@l wrote about the murals in the summer of 2010, after a few pieces were discovered at Cell Space:

The murals represent an archive of memory that spans two decades, from the time they were created as community projects through the 1990s, when they hung at the Real Alternatives Program, an alternative high school known as RAP.

“It’s our history,” said Ray Balberan, a longtime Mission activist who worked at RAP. He and Roberto Ariel Vargas, a former RAP director, made it clear that Cell Space was not to blame. “We take the responsibility for failing to keep track of them,” Vargas said at a meeting with the collective Monday night….

The murals – 15 or so four-by-eight-foot panels – held special significance because of when they were done, and because many local teenagers helped with them and went to RAP’s alternative high school or used its collection of social services.

Balberan was ecstatic when he heard about the new discovery. “What a trip; good things,” he said.

The murals had been stored at Cell Space and all but forgotten until 2010, when someone involved in RAP saw a piece of one being used as a door to a storage area.

Like the pieces that were recovered then, the new pieces will be displayed at Precita Eyes, 2981 24th St.

It’s not known how the new pieces got to Cell Space. The original Mission Loc@l article (see “An Archive of Memory” under Related) includes a slide show showing all of the originals.