The best of the best. I mostly photograph stencils out at Black Rock City, but also photograph inspiring art from time to time. 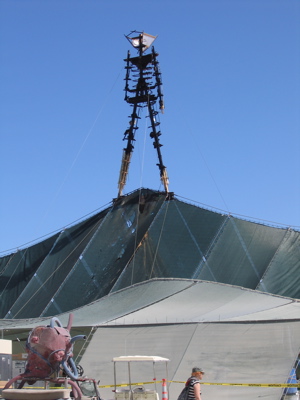 During an amazing full lunar eclipse early Tuesday morning, Paul Addis (and friends?), toasted the Man. I noticed it, and then my friends and I finally realized what was happening after about 5 minutes of disbelief. The Sustainable Living Roadshow games where in a pavilion beside the Man, so we hauled ass out there to see what was up. The games where closed for most of the week, and I checked in there regularly to see when they’d open. Got to know a few rangers thanks to those visits, and learn a huge lesson in dealing with things that aren’t in my control. 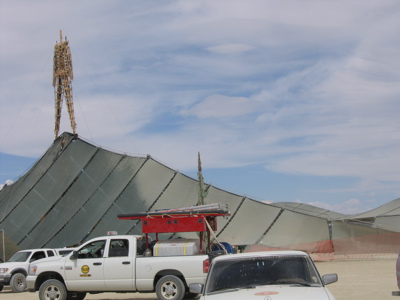 The headless second Man (Burning Man 2.0, Ernie, etc.) goes up on Thursday, after the DPW worked 2 days straight to build it. Shortly after I took this photo, a huge dust storm hit, causing further delays in opening the pavilion where the SLR games where. A ranger said they where calling this Man Ernie, so I assume that the first one was Bert. This Man’s head had a phoenix from the first Man’s remains. A person in my camp said her friend took the phoenix out of that head Saturday night. The DPW had messages of defiance written on the mythic bird. 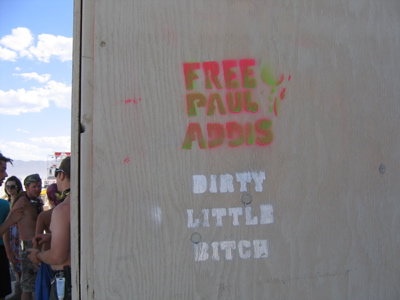 Didn’t take long for stencil graffiti to call out freedom for the “Guy Fawks” of Burning Man. Other than maybe having the most insane/hilarious mug shot in US history, Paul Addis is at once revered and scorned by the Burning Man community. I admit I was disappointed at not being able to work the SLR carny games, but had to laugh at such a bold feat of arson/autonomy/craziness. The Man belongs to the citizens of Black Rock City, and one citizen decided to burn it down. The incident really did liven up things, cause a stir, etc. The party continued, the city carried on, and focus shifted elsewhere. But we all had a story to tell about seeing it and believing it. 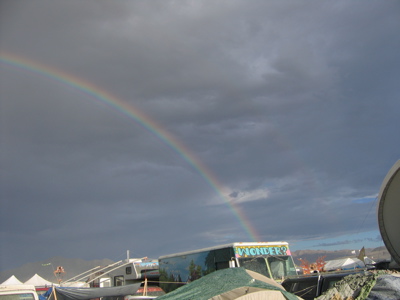 Along with an amazing total lunar eclipse (with meteorites and the Milky Way), the early burning of the Man, and long, powerful dust storms, a double rainbow appeared after one of those dust storms. The doubled side was to the left of this photo, but I decided to publish this one because the rainbow dives into Jonathan’s Wonder? truck. We watched the rainbow for a solid 30 minutes as a light rain drifted on other parts of Black Rock City. 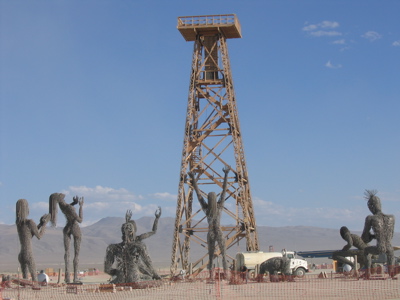 Crude Awakening, by SF artists Dan Das Mann and Karen Cusolito, stands at 90 feet and makes a bold statement for the Green Man theme. I climbed up the structure the night it opened and had a bit of vertigo at the top. Dust storms delayed the burn of this piece, so it went up after the Man on Saturday. We heard that it’d go up in a huge propane blast, but I had no idea that I might die during that explosion. After a music-synchronized fireworks display (had no idea about the music part until later), a fire started under the structure. Then a huge mushroom cloud appeared (see a video here). It was at least 1000 feet tall, and as it got taller, I got hotter. Finally, with me and my neighbors shielding our faces for fear of melting and burning, the heat passed and the oil rig became a 5-alarm fire. It was intense! Later in the week, I saw a huge fir tree on a flatbed truck. The tree replaced the oil rig so that the sculptures worshiped the tree. I also just found out that the explosion was maybe caused by an early ignition and was extremely dangerous. 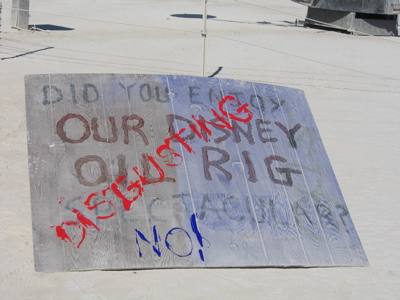 On Sunday, I walked over to Center Camp and saw this sign. I liked the criticism, so shot the first photo, and went inside to hang out with my bud Devin as he juggled. I walked out about an hour later and saw the added comment. I have always felt a Hollywood vibe with the larger burns. I imagine that pyrotech experts from LA come up to BRC and give that extra Disney touch to the spectacle out there. Guess other folks think like I do. 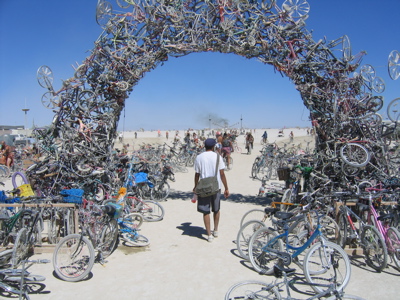 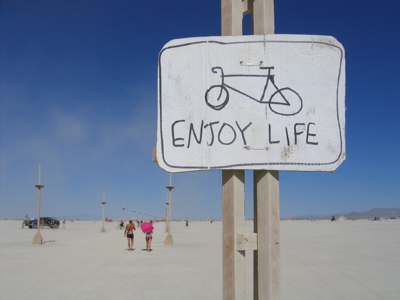 Bikes! Center Camp had thousands of bike racks for parking this year. Art cars have begun to install bike parking on their rigs. A new wave of pedal-powered art cars and art continues to grow at this event. There was a yellow bike service this year, so you could borrow a bike for a one-way trip anywhere in the city. I also just read that Black Rock City has the highest bicycle usage per capita than anywhere in the world (for the one week it exists). Critical Tits still runs strong, and I just spoke with a person who made the first-ever pedal-powered, two story, party car this year. Velo Disco had five bikes pushing 30 people around on the Playa, blasting tunes via solar powered PA. That can only mean more to come. 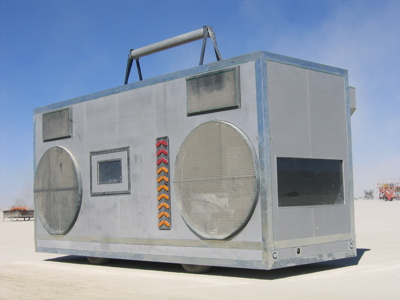 The Hip Hop vibe continues to grow at Burning Man, though I wasn’t too impressed this year by the beats out there. This art car tripped me out the night I saw it. The DJ was spinning inside the cassette insert area! CypherTown tried to get it together for hip hop nation,Â  but I didn’t see/hear any good things there. I ran into several graffiti writers, and found some legal walls on my own graffiti travels. Just like last year, writers where hitting up the places they could find with stencils, pieces, throw ups, and quick tags. If I go back next year, I’d love to create a space for constant graffiti murals and pieces. An art car that could be tagged to hell, supporting wooden panels for bombed pieces would be nice! Maybe a bike-powered graffiti-mobile??? 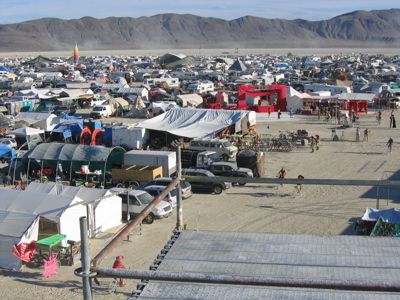 I didn’t compare Vertical Camp to condos, the current scourge of the Mission District development schemes, but the creators did in their Current TV segment.Â  Anyway, I climbed their scaffolding twice, once after an 11-year-old explained about 10 rules to me, and the second time nude with a virgin burner from Truckee (it was “Dress Down Saturday”). Took this shot the first time I climbed up there. If you can find the rainbow crayola piece, and then look right for the huge white saddle-shaped structure, then you’ve found my hood in Black Rock City. Our address was 4:20 and GRASSland. I kid not! The crayola tower blew over with the first dust storm. So did two of our three shade structures. My 2000 dome, back for a third Burning Man, stood firm as usual. Home Dome rocked at the SLR camp!