I only took a few photos that weren’t stencils. Since I brought my digital camera along this year, I thought I’d actually show you all a few other creations that graced the playa. 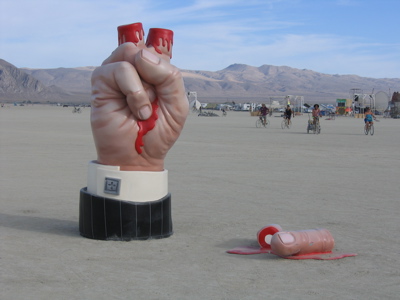 A huge peace sign rises out of the playa, but no peace for us this week. I didn’t see a lot of obvious politically-themed art at Burning Man in 2002, so was glad to see at least a dozen pieces overtly speaking to the times in 2006. 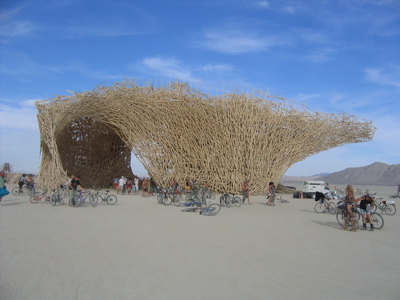 When I arrived to BRC on Monday, everyone buzzed about the “Belgian Waffle.” By the end of the week, the artist had protested the nickname in the playa papers (yes, there are papers printed at BRC), so all PC citizens corrected their language to speak about the mighty Uchronia, a message from the future. I missed watching this amazing structure burn, but saw the video on it’s web site. Rumor told that the artists wanted specially-sized pieces of wood, and thought that they’d lose their order in customs. So they bought a second order of wood and ended up with a huge pile that went unused. Critics tagged this structure as wasted “dead trees” and word was out that it shouldn’t be burned. No matter, with the Temple being small and unimpressive, the Waffle stunned the population throughout the week with DJs, light shows, and huge shadows thrown across this alien architecture. 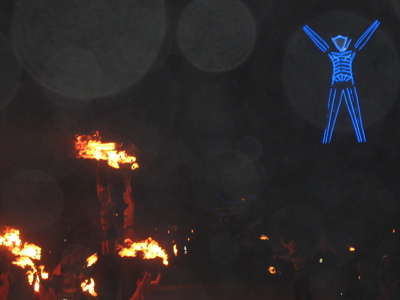 Saturday night and the Man will burn. I have always enjoyed not taking photographs of the Man burning so that I can keep the memory untarnished in my mind. Then it slowly fades away into all the other burns I witnessed. When I shot this, the flash caught the playa dust that 40,000 of us raised. Nice to see that a dust particle encircled the man in an “energy haze.” We watched the man burn, and then the huge structure it stood on burned too slow, so we left. The ancient ritual of circling the fire happened once the base collapsed, so I didn’t do that this year. 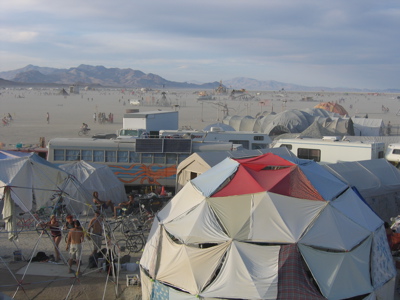 A view of Black Rock City as I idled on top of a velo-powered ferris wheel. The wheel stood at 4:30 in the city, so out there is the Man with Uchronia behind it. 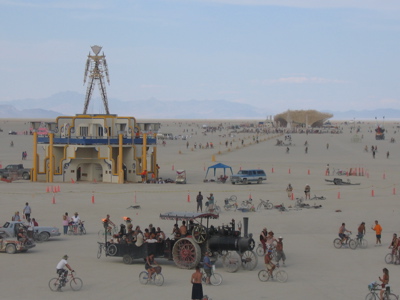 On a stencil hunt when I shot this photo. That’s an early 1900s steam-driven tractor pulling the trailer in the foreground. The Temple stands unassuming between the Man and Uchronia. I took this while standing on top of a two-story walled structure. The structure was covered in graffiti, much to my delight, with at least six stencils on the walls. 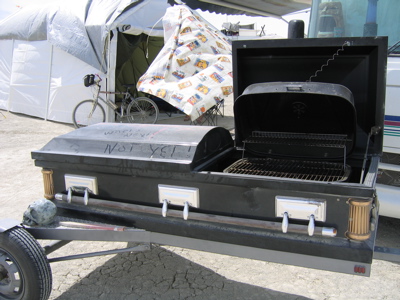 Funeral-themed art always graces BRC. I didn’t see any hearses this year, but found two caskets that had been tricked out for other uses. This one is a grill, and a legal trailer. The skulls at the rear of this are running tail lights! The other casket I found held kegs of root beer and had taps on its side. 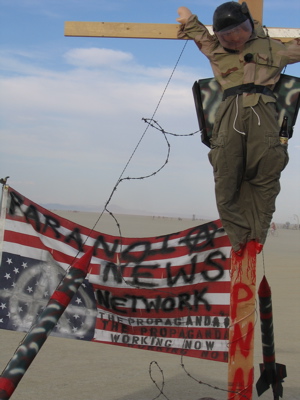 Another political piece that stood near the (no) peace sign. The radio station wasn’t running when I took this, but I think it was a nice use of sound arts with easily-made, DIY sculpture.