My friend Billy enlisted into the US Army about 11 years ago, and has since been promoted to Major. He’s been to Iraq twice, most recently returning earlier this year after being there over 12 months. I’ve known Billy since high school back in the 1980s, but haven’t seen him in about 10 years (I moved to San Francisco, and he started a family and moved all over the place). He’s still the same young man I knew all those years ago, except he now has an even shorter haircut, wears fatigues, and has three beautiful children.

The forces of the universe finally aligned and allowed Billy and me to meet up, in Fort Leavenworth, Kansas. My best friend Mark, maybe Billy’s oldest and best friend as well, happened to be driving to South Carolina from Colorado. So the three of us got together for the first time in more than 10 years. We all had an amazing chance to be present with one another, catch up a little, and enjoy the fact that we’re all still the same as we where all those years ago (except maybe for greying or receding hair). 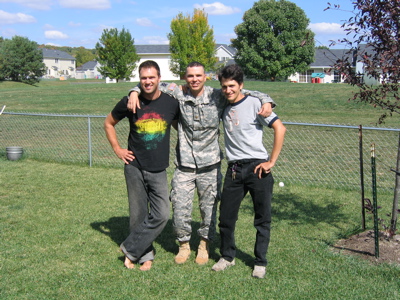 Mark, with a Spearhead shirt on, Billy in his fatigues, and myselfÂ  (sporting a Just Seeds slingshot print), in Billy’s back yard. Billy and his family currently live on base at Fort Leavenworth, KS, and hope to be there for a while.

Billy can tell a story, so my first night there, over beer and cigars, we got him started on telling stories in Iraq. He had already walked me around his house, a new duplex on base, showing me many photographs of Iraq. He also had models, commemorative maps, and other souvenirs of his two trips there. From the beginning of his tale, he stated how his commanding officers made it clear that they were “liberators, not occupiers.” Billy said that a few soldiers had spray painted aggressive graffiti, and his commanders made them take it off.

His story seemed to be bits and pieces of many days of exhaustive humping towards Baghdad, and mostly revolved around the insanity of war. He didn’t go into many graphic details, and wasn’t really on the front line as a fighter (he commanded a convoy of gas tankers that refueled mobile gas stations, which in turn, refueled the machines of war), though he and his men were well armed and protected by armed vehicles. Billy showed me the route they took into Baghdad, through the dessert, on the commemorative map that he had on his stairwell wall. “Through the dessert” meant that his men drove six-wheel-drive gas tankers about 60 MPH through raw dessert. Billy stayed on the radio in his Humvee. Though hilarious in a Catch 22 kind of way, hearing Billy tell of not sleeping for days, not stopping unless a truck had to be pulled out of the sand, and moving north to Baghdad in horrible conditions, showed how dreadful being an underpaid soldier really is.

The commanders all said that they would be in Baghdad in about a week, and it took longer than that. Billy shared tales of sand storms that made movement impossible, catching naps on the side of a “road” and getting chewed out by a bird colonel for it (then going back to sleep), waking up to mortar fire and having to haul ass to safety. When Billy began to talk about enemy fire, or driving through villages, he would refer to the pucker factor. Throughout the whole chat, I had to interrupt to get Billy to explain the Army lingo, so I asked him about pucker factor.

Pucker factor is simply when your asshole constricts due to the raising danger and fear of a situation. So when he had to drive his convoy into a village, at night, his pucker factor went up, way up. When his protection unit saw a slew of Republican Guards leaving an area under a bridge (they shot it all up with machine guns), or when his commander stopped the convoy in a village, with a hedge running along the road, or when they lost the road in a sandstorm and ended up driving the tankers up a sandy dessert incline…. the pucker factor was high.

In the back of my mind, I wondered when the pucker factor ever let up, but Billy managed to have a good attitude about his experiences. Mark and I didn’t push him to share anything he didn’t want to. Billy did tell me later that he doesn’t read papers or watch the news because it’s all bullshit compared to what’s really going on in Iraq. A US Marine just had a letter published in Time Magazine, pretty much saying the same thing. Bill also mentioned that he had a bunk mate keep a journal. Billy had no idea why anyone would keep a journal because there wasn’t much worth remembering (again, the Marine’s published letter says the same thing).

Billy also had other stories to tell: making camp at Saddam Hussein’s palace, finding a golden carriage and riding in it as his men hauled it to their location (it soon became a soldier’s photo-op destination), finding a warehouse full of silverware, another full of Persian rugs (his men used them to keep the dust down where they bunked), fixing up a fleet of confiscated cars and driving them around, burning drums of shit and piss from the latrines (mix gasoline in the drums and light, everyone shared in that nasty detail), using empty water bottles to pee in and littering them across the Iraqi dessert, and going to Babylon.

Most of these stories were from his first trip. Billy didn’t talk about his recent trip, other than saying that things were very different. He had to leave the Green Zone often to see his men at another base, so the drive was dangerous every time he left the base. The Humvee he invaded Iraq in had no armor plating, plastic windows, etc., while this last time things had become more protected. Billy only mentioned one brush with an IED, told of a suicide bomber causing a huge explosion outside his base, and how soldiers couldn’t bring things back like he did his first time over there (his Iraqi souvenirs were locked up in a case, and he couldn’t find the key). He showed me and Mark a video of a US soldier being shot by a sniper, who prayed as the American fell on the ground, hopped up, and ran for cover (the soldier was shot in his protective vest). We got to hear a song that two Reserve soldiers recorded over there, spoofing Margaritaville and talking about how things were in Iraq, blaming it on Rumsfeld, Cheney, Bush, and finally themselves for signing up in the first place.

Billy’s a good soldier, headed to Colonel before his final 8 years are up. Mark pushed him on his political views a bit more than I did, and Billy only said that he could care less about politics. When he gets orders, he has to carry them out. After Mark left, I spent an extra day with Billy’s family. We went bowling at the base’s bowling alley. I asked Billy “what is it really going to take to finish this as soon as possible?” His answer was twice as many men over there doing the job. We also discussed how the Reserves are getting worked hard by this current war, making things difficult.

Mark and I share the same views on the war, the government, capitalism, and the looming environmental realities that humans are beginning to come to grips with. We also share the same view about our friend Billy. Mark said it best: “I’m glad I have a friend in the Army, and I’m glad that the Army’s been good to Billy.” Hard as it may be to picture Billy in Iraq, with the pucker factor level high, we know that he gets a lot of good things out of serving our country. Mark and I, in turn, learn a lot about how people think outside our views.

Soldiers like Billy don’t make the major decisions to go to war, but they’re the ones dealing with the danger, the memories, and the emotions that may define their lives. While the machine churns in Washington, DC, specifically at the Pentagon, and while a generation of men and women get thrown into the front lines of a controversial war, I’m just happy that Billy made it back alive with his innocent sense of the world still intact.

And eventhough he may not agree with me and Mark, at least Billy keeps us in his life and doesn’t complain when we express our opinions. That blurs the black and white that our world seems to gravitate toward, and creates grey areas that sit better in my mind. So, as I stand by my beliefs that our Pentagon war machine is eating us all alive, I still appreciate the blurred parts that exist when I talk with Billy.

If you don’t question what you experience, how will we ever learn from ourselves and others? And how will we get out of the storm of problems that we’re all headed into?