Here’s a great post about my Vancouver travels from Chris’s point-of-view.

Friday arrived sunny and warm, making our last day here another spectacular opportunity to soak in Vancouver. Chris had been talking about riding around Stanley Park since we arrived, so we biked out there soon after eating breakfast here on 20th Ave. We chose to stay south of False Creek scooting along 10th AvenueÂ  and then biked over the Granville Street Bridge. We easily found a bike lane leading us straight through the downtown. The lane took us down to the beginning of the Stanley Park path. 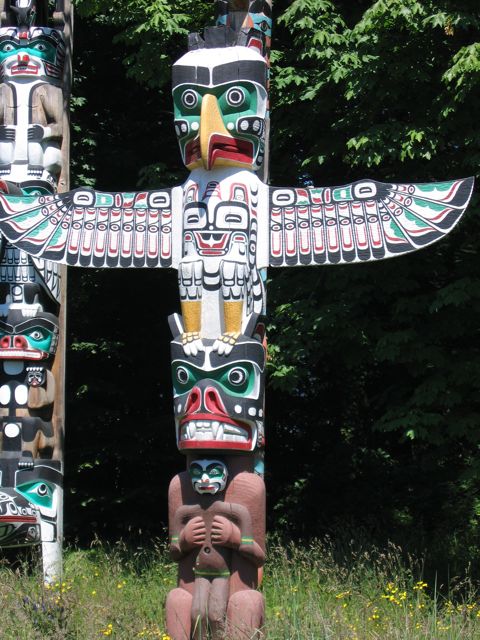 We planned to ride the one-way path around the whole perimeter of the peninsula. Before we hit that path, we stopped by the totem poles. Many tourists snapped photos of the poles before they hopped back on their buses. Paying a visit to this amazing native art started the ride off right. We had a great time with sunny paths, great views and beautiful people to share it with. We rode under the Lion’s Gate Bridge, and then drove to the edge of Davie St. to have lunch at a local hamburger shack. 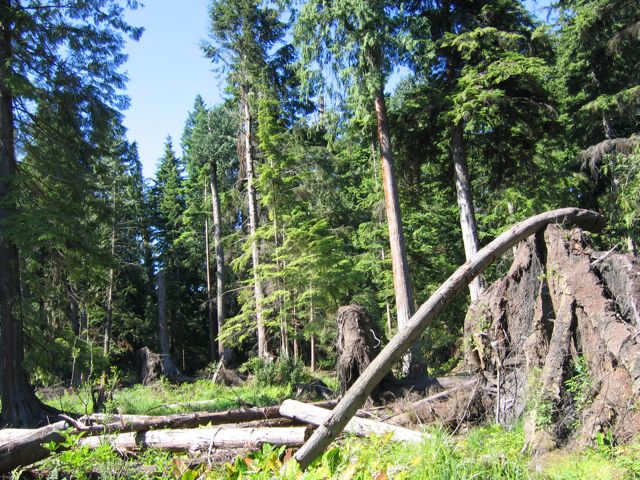 After a stroll to find sweets to eat, we headed back to Stanley Park for one last hour of wandering before heading to the Artgallery for the Critical Mass meet up. We didn’t travel far into the center of the park and still found a forested area full of chirping birds and buzzing insects. 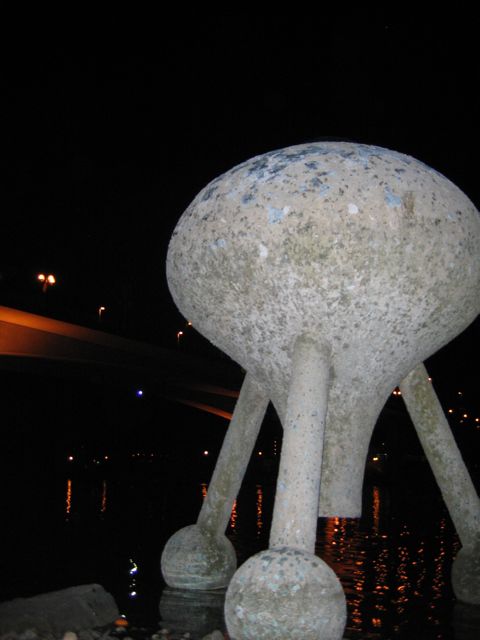 When we first entered Stanley Park, I saw two crows harassing a bald eagle. I’ve had odd animal encounters on this trip. First, the deer crossing the street in Yreka. I then almost ran over a cat while bombing down a hill in Portland. Last night, while visiting an odd UFO structure on False Creek’s shore, a rat ran out of the tall grass and bared its teeth at me. I’ll have the rat story to tell when spinning yarns about the night I went biking with Gary Fisher, Chris Carlsson, Carl, and Amy! 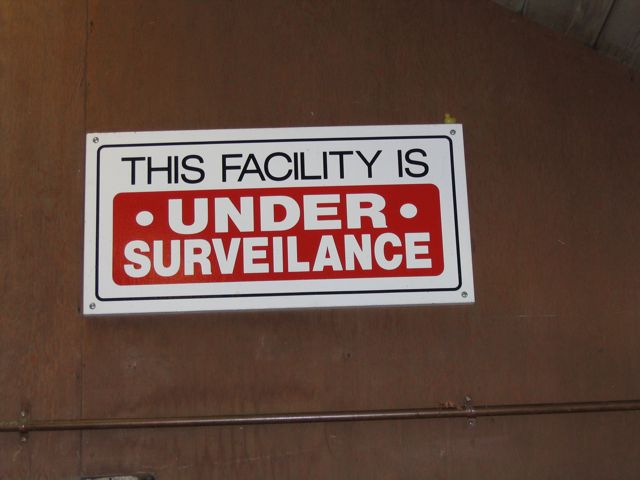 Stopped by the washroom (Canadians call toilets washrooms) in the park before heading to the Artgallery Critical Mass meet up. Two signs let me know quickly that Big Brother is straight, not into public sex, and watching me take a legally sanctioned leak at the urinal. Odd that I don’t see many security cameras here in Vancouver. Guess there were some in this washroom!

We to to the Artgallery at 5 PM, so had an hour to wait before hitting the road. June Mass in Vancouver is the year’s largest. June is also bike month here, so events have been ongoing so far. A bike shorts show played last night. The monthly Midnight Mass rolled by Chris and I on Commercial Street last night. We caught up and went a ways with them before peeling off for the crash pad. This ride is the last Thursday of the month, and about 75 people were clustered for the good times.

As 6:20 rolled up, a hippie walked through the crowd chanting “One mass, keep it together!” Some people chanted along but it soon died out. Amy told us that last month’s mass ended up broken apart, so she hoped that this month would keep it together. A man had been giving flyers out during the past hour. (My favorite tip on the list was No. 07: “Compliment someone on their bike or accessories!” I also liked “when you are tired of riding you can leave anytime….”) He now had a bullhorn and stood at the bottom of the Argallery’s stairs and spoke to a section of the bikers. We couldn’t hear anything he was saying but realized that the people were repeating what he was saying a la major street protests. 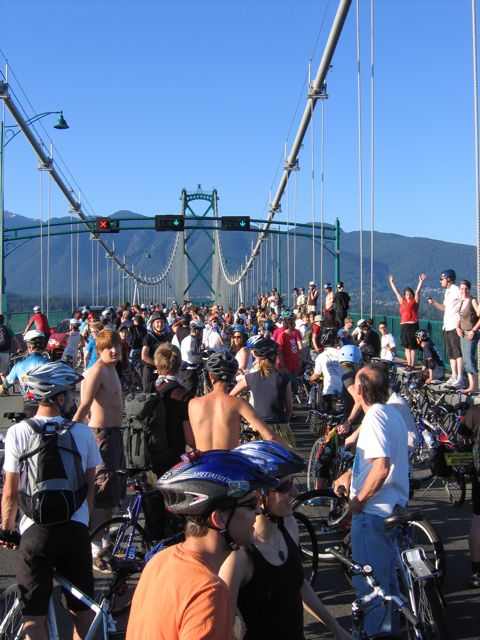 That group must’ve started the ride because it left with their section at the head. I can’t remember the route of the Critical Mass because Chris and I ended up riding with the group for three hours before limping home with sore body parts. We rode over three bridges, well, two and a half. We stopped in the middle of the Lion’s Gate Bridge and partied a bit before turning around and heading back into Vancouver. We also crossed by the Artgallery a few times and hit many spots that Chris and I had already discovered (Gastown, Pigeon Park, etc.).

Thousands of people came out for the event. Huge groups of bikers corked the streets and turned the intersections into festivals. I saw hula hooping, juggling, concertina playing, banjo playing, and good times coming from the corkers. I started giving away high fives and yelling “Aw, yeah. Corkie stylie!” while most people kept thanking the corkers. Many people kept thanking the car drivers too. Many times, I saw car drivers chilling out as the party rolled by. One couple had wine out on their roof. Another man napped on his hood. It was a good vibe.

I saw some skaters bombing with us down long hill as we left Stanley Park. Earlier, I had seen a few peds with thumbs out, trying to hitch a ride form a bike. Many many costumed and sexy-dressed people biked along. One woman had a sign on her back basket that said “put the fun between your legs.” Several people rode unicycles, even bombing the hills on them. One person pulled a tailer with a woman in a wheelchair strapped onto it. Another person had a container full of bread with “Free Fuel” written on it. Still another tandem rider played three drums on the back section of the bike.

The remnants of the thousands of people finally stopped at a club on 8th Avenue around 9:30 PM. Chris and I were wiped. Nonstop biking since we arrived here, hell, since before we arrived here, had maxxed out our energy. I was cramping up in my shoulders, and Chris’s wrist was worn out from playing his bike bell. We pushed our bikes up to 10th Avenue and then biked over to Commercial St. for a great Indian dinner. Then scooted over to our pad for the last night of sleep before Victoria.