The first day ended with a fizzle tonight, after filling up the tank in the ’96 Nissan in Yreka. Chris and I were on track to head up a bit further to Siad Valley (on the Klamath River) and spend the night with a friend of his. Wine, fresh salad, and good conversation awaited us in the wood of Norther California. Friday the 13th had gone smoothly so far. We did have a later departure out of San Francisco than planned, but all our stuff fit in the car, the bikes were nicely set up on the bike rack. We had a few bags of good food, a cooler of stuff, and AC to get through the hot day. No clouds covered Mount Shasta (The snow pack on top was terribly low as was Lake Shasta. Lake Shasta was about 50 feet down! The drought is here.) and traffic wasn’t too bad.

Turn off the water when you wash/bathe…. not much snow left to fill the supply!

Our poor Nissan beast of burden needs a starter.

But after filling up the tank in Yreka, the Nissan’s ignition didn’t turn over. Instead, Chris and I heard a clicking sound and a hiss from under the hood. Shit. I got the feeling that the starter was messed up. Chris hoped that it was the battery (a new battery; maybe the power inverter we were using had sucked the energy out of it) and called AAA to get service. This was the second time in two days Chris had to call AAA. Yesterday, he lost the keys to the Nissan and had to have AAA break in and then make duplicate keys. Today, AAA got to give us a jump. 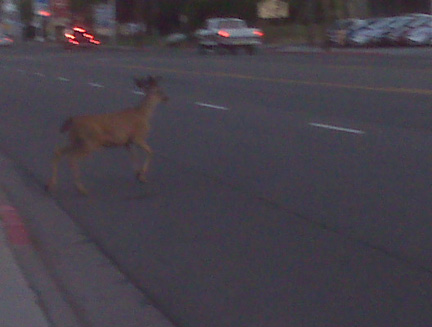 The urban deer and his asphalt habitat

The wait was going to be 30 or 45 minutes, so I decided to use the sidewalk to kill the time. I walked about 15 minutes into Yreka, passing hotels, car dealerships, the forest service HQ, a museum and other closed businesses. About 75 yards from the gas station, I was startled to see a buck walking up a driveway! He looked happy to see me, but I told him “don’t come near me!” I had no intention of feeding the thing. Instead, he started off into the four-lane road, intent on getting to the other side. “Go!” I yelled at him. “Keep moving!” “Go across!” No cars drove by at first, and then a woman slowed down to let the deer meander across the street. Another car approached from the opposite direction and the woman slowly drove off, waving to the other car to slow down. The deer made it safely across the street, and I walked back to the gas station.

As I walked up, a tow truck pulled in. He’d already been to the Nissan, and the jump didn’t do any good. He’d left to try to find a mechanic friend who could look at the engine and maybe fix it. It was another part of the ignition system. Chris’s friend knows engines and told Chris via the phone that it was a solenoid issue. Easy fix he said. The AAA guy couldn’t find his friend but was willing to keep looking for another hour or two. Chris and I decided to bike across the street to eat Thai and wait for news on a hopeful quick repair.

Right before we arrived to the restaurant, the AAA guy came back, whistling to get our attention. We met him back at the car in the gas station lot and he said that he wouldn’t find those guys tonight. “It’s Summer and they’re gone.” So he towed the Nissan and dropped it off down the street at A1 Repair. We threw our bags on the truck and ended up at the Rodeway Inn across from the gas station.

We’re hoping that we can get the car fixed early tomorrow. A1 didn’t have an answering machine so we had no way to let them know ASAP that we needed assistance. Chris left a business card on the car and will call in the morning. Nothing going on tonight in Yreka. Chris made sandwiches and now we connect to the Interweb and watch Young Frankenstein for shits and giggles. Let’s hope that things go smoothly tomorrow and we get to Eugene for Chris’s reading (mine is Saturday).