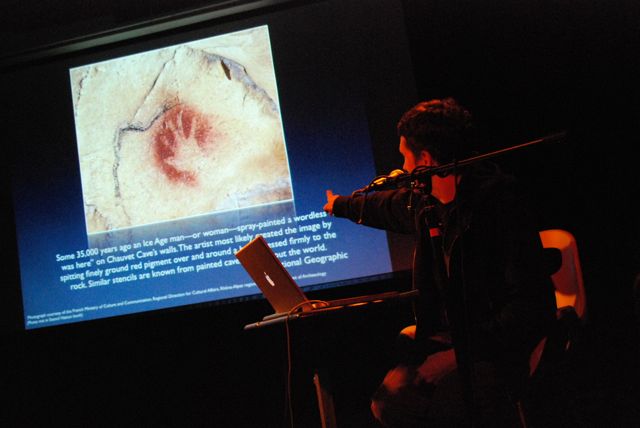 Week 1 of the Southeast Leg of the tour went great. Had marvelous crowds at the last three events.

Greenville started about 40 minutes late, after only about four people had arrived by 5:30. Chip Batson, an old friend from high school, got the prize for showing up early: we hung out and caught up on things. Open Book wasn’t too interested in my event, though they were nice and helpful when asked. They didn’t even know how many books were sold that night! I think around 10 to 12. Good to see old friends and make new ones, which is the best reward for being on the road. Asheville was too cold to stencil hunt, so I holed up in Malaprops’ cafe with a friend and caught up. They didn’t have the book! Firestorm is more of a cafe/performance space than a book store, so the crowd hanging out there got to see the slide presentation. Didn’t sell many books to strangers there, so am glad for the friends who showed up and helped fund the tour. Had about 30 folks in the seats and had a good time chatting with people afterward. The Hub City Book Fair in Spartanburg, SC wasn’t the best fit, but everyone was so nice. I was the youngest author at the event, and most of the folks at the Fair knew all the authors by first name. Times are definitely tough out here so attendance was dramatically off this year. However, an author who co-wrote the book “A Patriot’s Almanac” sold a huge pile of books to the vets and parents of vets that stopped by. Hmm, maybe I should publish a book that’s less anarchistic next time? Nah! The set up for the evening presentation at Hub Bub’s Showroom was the most professional yet on tour. I felt like a rock star up on stage with the theater lights and huge screen (see the pics). Thanks to Stephen Long and all the folks at Hub Bub for a great day there. Had about 20 folks in the audience. Some Converse art students came by to check things out thanks to their professor who gave them extra credit. Had wakame and (free) beer with the Hub Bub crew afterwards, and we discussed contemporary art.

On the media front, the hits just continue in Atlanta. First, here’s the article that just came out in today’s Chattanooga Times Free Press. Enjoy and see you on the road this weekend.

Russell Howze encourages people to expand their idea of art.

Mr. Howze, of San Francisco, will visit Rock Point Books this Saturday to discuss his book, â€œStencil Nation: Graffiti, Community and Art,â€ a photographic collection of stencil work done by an international collection of artists.

After seeing his first stencil in 1990, Mr. Howze became enamored of the idea of creating a historical document of a public, ephemeral art form.

â€œ(Iâ€™m intrigued by) the impermanence of the art form in the streets,â€ he said. â€œIt fades away and almost always gets painted over.â€

â€œLook at the incentives on the Southside for more artistic people,â€ she said. â€œWeâ€™re really trying to encourage artists to express themselves. (The work in â€˜Stencil Nationâ€™ is) not messy. Itâ€™s kind of modern, and itâ€™s not gang-related or anything.â€

Mr. Howze grew up in Greenville County, S.C., and has a history degree from Wofford College in Spartanburg, S.C. He has done some stenciling of his own but is primarily a photographer, documenting what he called an â€œamazing explosion of creativity.â€

Stencil artists often use public spaces to display their art and not always within the confines of the law. Mr. Howze would encourage the naysayers to expand their concept of what art is.

He added that some stencil graffiti artists have had the police called on them, but he finds bought and paid-for â€œvisual pollution,â€ such as advertising, more offensive than graffiti.

â€œIf (someone) has a problem with me doing one stencil in their neighborhood, maybe they should talk to the corporations who are putting up the billboards,â€ he said.

how to CREATE A STENCIL

1Draw an image on a piece of stiff paper.

3Apply a pigment (such as spray paint) through the spaces of the stencil to create the image.

â€œObviously it takes some skill to cut out a stencil and to make a stencil image on a piece of paper,â€ said Russell Howze. â€œThe first stencil I cut out was horrible.â€ 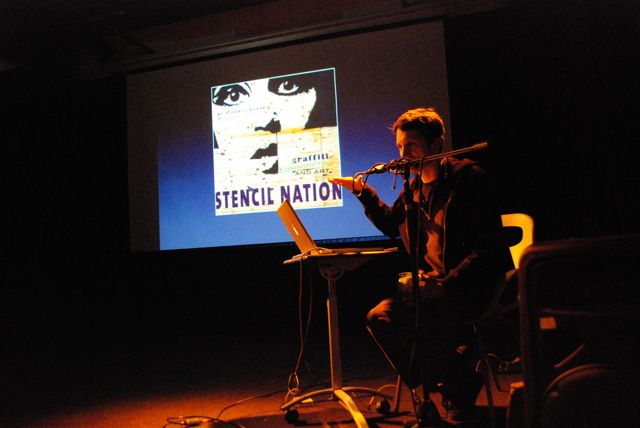